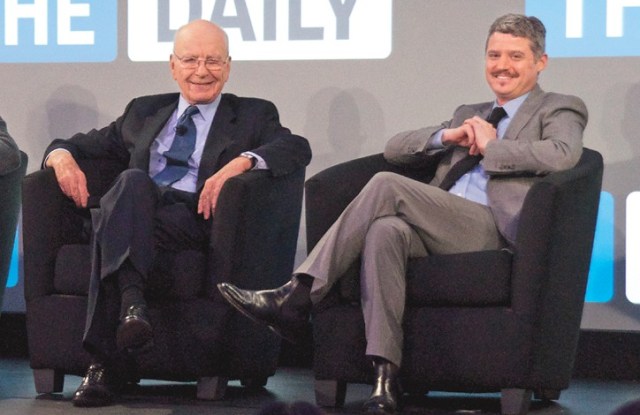 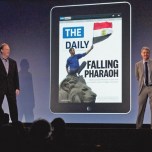 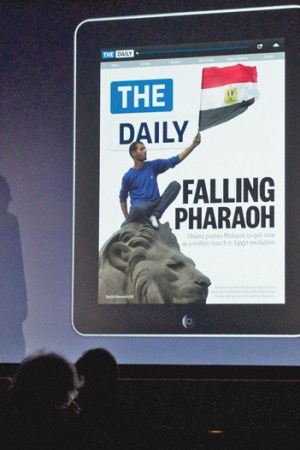 NEW YORK — On Wednesday morning, News Corp. chairman Rupert Murdoch was in the basement at the Guggenheim Museum here and spoke like this would be a day to be remembered. He held an iPad that was opened to his latest ridiculously expensive investment in news, The Daily, and said that it could “completely reimagine our craft.” It was something that would make “the business of news gathering and news editing viable again.” It would usher in an era of “new journalism.”

This was a day eight months in the making for Murdoch. And ever since the idea of The Daily came to him one restless night last May, there was only one person he wanted to carry out his mission.

“His idea was very simple,” said Jesse Angelo, the 37-year-old editor of The Daily. “He just came in and said, ‘Could we start a new national newspaper? No paper, no trucks. And just do it on the iPad.’ And you sort of went ‘Huh! That’s a good idea.’ I was proud and honored that he would think of me to do it.”

Especially because Murdoch has given Angelo a $30 million budget, which, since Labor Day, he has partially used to assemble a team more than 100 strong.

“How many times in your life do you get a chance to do that?” he asked.

If The Daily is the culmination of everything that Murdoch has learned after decades in the news business — a low price point, news stories mixed with photos of babes, big sports coverage — then Angelo is the person he has chosen to make good on his promise that The Daily will change the news.

On the surface, Angelo’s ascent looks like it was ripped right out of the Sulzberger playbook on how to groom an heir. He got educated. He did pit stops at Murdoch’s papers in England and Australia. At The New York Post, he worked his way up from stringer to executive editor. It seemed only inevitable that he would get to run something.

“It’s funny because you could kind of think, ‘Oh, he was able to get in and do well because he knows the Murdochs,’ ” said Jon Elsen, a former business editor at the Post and the Times, who oversaw Angelo’s time on the Post’s business desk. “I think it’s actually the opposite. I think he decided to go to News Corp. and stay at News Corp. because he’s close to the Murdochs. He probably could have gone anywhere. It’s really to the benefit to News Corp. that they had that connection with him.”

Around 10 years ago, then Post editor in chief Xana Antunes had a meeting with Angelo, who was then deputy business editor. He had only been at the paper for a few years, but he’d received lots of good reviews, and she wanted to find a way to get him on the news desk. She was thinking about a few options and, after several minutes of hemming and hawing, finally asked him, “Well, what do you want to do?”

“I want to do whatever I need to do to get into your job,” said Angelo, according to several people familiar with the meeting.

He was in his late 20s, but he was ambitious. He made no secret that one day he wanted to be editor of his favorite newspaper, the Post. And colleagues of Angelo’s throughout the years said there wasn’t much resentment, despite his decidedly un-Post-like upbringing.

Angelo was born in 1973 and grew up on Central Park West. His father, John Angelo, founded the firm Angelo, Gordon & Co., which today manages about $23 billion in assets. John Angelo also kept powerful company and has been lifelong friends with Michael Eisner and the former Disney chief is Jesse’s godfather. Judy Hart Angelo, Jesse’s mother, is the co-writer of theme songs for “Cheers,” “Mr. Belvedere” and “Punky Brewster.” Both of Jesse’s parents have served on elite boards in New York: John is on the board of directors at Sotheby’s, along with James Murdoch and Diana Taylor; Judy has been on the boards of Central Park Conservancy and the Manhattan Theater Club. They currently live in The Dakota.

Angelo attended the Trinity School, but it wasn’t until he was about 15 that he started getting into journalism. “In high school, I just started reading papers and fell in love with them,” he recalled.

After his sophomore year at Harvard, Angelo took a year off from school and went to London to work at the best-selling paper in the U.K., Murdoch’s tabloid, The Sun. It was a typical entry-level gig (fetched coffee, tagged along with reporters, learned shorthand) and, after 10 months, he was so seduced by the Sun that he wanted to stay behind and leave school, but his mother suggested that wasn’t the best idea. He went back to college.

At Harvard, Angelo was a history and literature major and wrote his thesis on an obscure bit of journalism history about two New York newspapers being shut down by the government in 1864 after they published something called “The Bogus Proclamation.”

After graduation, his immersion in all things Murdoch only deepened — he went to Sydney to work for Murdoch’s paper, The Daily Telegraph, which was edited by Col Allan.

“Obviously I wanted to stay with the company,” Angelo said, “and it just seemed like a place to learn more. I think they train journalists down there really, really, really well.”

There he covered what any good tabloid reporter would: murder, mayhem, destruction. It’s also where the Ivy League grad learned the art of writing for one of Murdoch’s papers. Take, for example, a lede from a story published 14 years ago with the headline, “Family Finds Love on the Ocean Waves”: “For the Ward family, true love always will be inextricably intertwined with the cruise ship Fairstar. Daughter Michelle and father Michael both were struck by Cupid’s arrow while walking the polished wooden decks of Australia’s most fabled fun ship.”

In 1999, he came back to New York and desperately knocked at the door of the Post to find a job. “He loved the Post and thought it was the best paper in town and he really believed it. He wasn’t even joking,” said one former colleague. There were no job openings at first, so he became a stringer for Page Six before a spot opened up on the Sunday paper. He worked briefly as a general assignment reporter, and then began to cover business. Angelo later told friends and colleagues that he felt like he wasn’t a very good reporter. Nevertheless, he caught the attention of his editor.

“He was this whirlwind,” said Elsen, the Post’s business editor back then. “He was obviously very smart, he was enterprising and he’s coming in every day with tons of ideas for stories.”

One thing that more than a dozen people interviewed for this story said is that Angelo put in lots and lots of hours on the job. Elsen said when it came time to hire a deputy, no one told him to promote Angelo along. Elsen simply wanted the guy with all the ideas. He made Angelo his deputy.

“Given his relationship with the Murdochs, given that his father is a very successful hedge fund manager and his family is close to Michael Eisner, he was the hardest working guy on the staff,” said Elsen. “I admired his skill and talent.”

After Allan took over the Post in April 2001, Angelo was quickly promoted to metro editor. And when you took a look at the Post-reporter-turned-editor, colleagues said that the rich kid from the Upper West Side could be mistaken for any disheveled Post reporter.

“He was this sort of gruff, archetypal tabloid editor,” said former Postie and current Times reporter Tim Arango, reflecting on the first time he met Angelo at the Post’s watering hole, Langan’s. “He seemed like someone who has newspaper ink in his veins. He was smoking and all that. I had no idea about his background or anything, but he struck me as how I would have imagined the metro editor at the Post being like.”

If someone from Angelo’s background needed to cultivate that look, then he just as quickly lost it as he rose the managerial ranks. Colleagues said he stopped smoking. He lost weight. He cleaned up. His suits were nicer. He started going gray. Instead of goofing off with staffers or logging long hours at Langan’s, he became more distant and spent less time with the regular folk, according to several sources. The messy desk started getting neater. The goatee has evolved into a mustache and a soul patch.

And like any striver worth his salt, Angelo had the perfect ally in Allan. One colleague described their relationship as “father and son.” Elsen said that Angelo was Allan’s “disciple.” Certainly, the relationship was mutually beneficial. Angelo got time with a bizarre, short-tempered and brilliant tabloid editor; Allan got to oversee a rising star that Rupert Murdoch held dearly.

“Col’s a great editor and he’s good friend,” said Angelo. “We worked very, very close together for a long time. I’ve learned an enormous amount from him. Look, we got to cover 9/11 and two wars and the blackout and the plane in the Hudson and a lot of big stories together. We’ve had a pretty amazing run.”

As an editor, Post staffers said that Allan made his mark on Angelo. They said Angelo operates by the gut (“Do this story, not that one”); he can be impatient; he can sometimes be mean.

“He motivated people a little bit with fear,” said Arango. “He had that attitude and that aggression.”

“The whole place is run on fear,” said a Post staffer. “That is the management style he learned under.”

Nevertheless, Angelo served as an important buffer between Allan and the rest of the paper, and he was — virtually across the board — well-liked and well-respected.

Angelo is a private person. He rarely does interviews, and though he was an occasionally jovial spokesman for The Daily on Wednesday at the Guggenheim, it wasn’t hard to tell he probably wished he was somewhere else. When an ex-girlfriend, Bridget Harrison, wrote about him in a book, “Tabloid Love: Looking for Mr. Right in All the Wrong Places,” he was reportedly very unhappy about it. Throughout the years at the Post, few people heard him talk about his life, unless he was directly asked.

It’s hard to tell why. Maybe it’s because Angelo believes that the only truly powerful people are the ones who you don’t really know, or maybe it’s because to make it in journalism (especially at the Post), he didn’t want anyone to play up his background. Either way, a person who could have had a perfectly comfortable life, decided to make it work in — of all places — newspapers, and now’s he got the big job — a venture nurtured by Murdoch, on which the media mogul no doubt is willing to spend millions more.

Certainly Angelo is confident it will work.

Now he has to pull it off.