Christian Dior is the latest French luxury brand to get a prestigious museum showcase in Russia. 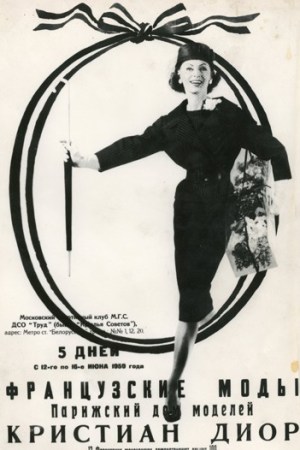 RUSSIAN ARCH: Christian Dior is the latest French luxury brand to get a prestigious museum showcase in Russia. Moscow’s Museé d’Art Moderne will host “Christian Dior, 60 Years of Photography,” which opens to the public today and runs through May 10 during the sixth International Festival of Moscow. Admission is 250 rubles, or about $7.40. The history of the French fashion house is told through 120 images by the likes of Henry Clarke, Erwin Blumenfeld, Patrick Demarchelier, Zanna and Simon Proctor. Dior also plans to showcase recent works by Chinese artists, including Quentin Shih, who shot models wearing couture juxtaposed with workaday landscapes. While clothes by the founding couturier and John Galliano get the lion’s share of attention, there are also Guido Mocafico still lifes of fine jewelry by Victoire de Castellane and Nan Goldin images featuring Dior Homme men’s wear by Kris Van Assche. As reported, Dior plans to open new boutiques this year in Saint Petersburg and Ekatrinaburg.

PAPER CHASE: Rei Kawakubo is collaborating with another surprising partner for her rotating “event” shop in Tokyo’s Aoyama district: Vogue Nippon. On May 28, Comme des Garçons and the fashion title will open a shop to mark Vogue Nippon’s 10th anniversary, billed as a magazine you can walk into — with a new theme, merchandise and exhibitions each month. Participants for the first month — in tandem with the manga-themed July issue — include Takashi Murakami, Chanel, Fendi, Loewe, Martin Margiela and Walter van Beirendonck. Kawakubo is charged with designing the space, and envisions a clash of energies from various designers and artists. The Vogue Nippon shop is slated to stay open until fall. The Aoyama shop was recently a showcase for Kawakubo’s collaboration on leather goods with Louis Vuitton.

MAXIM MOVES ONLINE: Following the digital trail of publications such as the Seattle Post-Intelligencer and the Christian Science Monitor, the British edition of Maxim — one of Britain’s pioneering “lad mags” — will cease publishing a print edition and shift the focus to its online operation. Dennis Publishing said Thursday the final print edition of the U.K. men’s title, which launched in 1995, would be June. Dennis said it planned to bolster the editorial team at Maxim.co.uk, and chief executive James Tye said, “The future of the brand in the U.K. is online.”

A spokeswoman for Dennis told WWD on Thursday that the U.S. edition of the magazine, which is operated by Alpha Media Inc., would remain in print. That edition has been successful from the get-go, with a monthly circulation of 2.5 million. Dennis will now be the sole importer of the U.S. Maxim in the U.K., supplying copies to newsstands and subscribers.

The spokeswoman said the decision to switch to online was a reactive one. “We did this in answer to consumer demand — we found our readers were more engaged with the online edition than with the print one…and we need to go where the consumers are going,” she said.