On Monday, Details hosted a dinner at Los Angeles’ Dominick’s in honor of Ryan Reynolds' flip cover for its June-July issue. 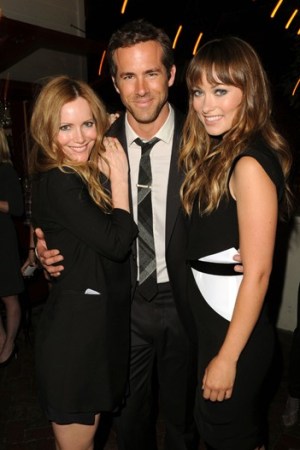 RYAN REYNOLDS TAKES CARE OF THE DETAILS: As far as superhero outfits go, the Green Lantern’s leaves a bit to be desired. “It’s the most nicely appointed superhero you’ll find,” said Ryan Reynolds, who sports a green unitard and matching ring in the new DC Comics-based action flick hitting theaters June 17, before quickly adding: “It’s not actually that comfortable.” Reynolds may get a chance to don another superhero getup, albeit one in red, for Marvel’s “Deadpool,” which is in development with a targeted 2014 release. Jumping from DC Comics’ universe to Marvel’s is akin to moving from the Yankees to the Red Sox. “I might try to unite the foes,” Reynolds said of the chance to portray the mercenary Deadpool with superpowers.

Until the unitard switch, Reynolds looked dapper wearing a Maison Martin Margiela suit and Gentry tie to the dinner that Details hosted on Monday at Los Angeles’ Dominick’s in honor of his flip cover for its June-July issue. Reynolds, who is making his debut on Details’ cover, is far easier on the eyes than the can of shaving cream that was the other option for the back cover heralding the grooming supplement, said Details editor in chief Dan Peres. Looking ahead, Peres said the men’s magazine plans a social media issue in September with a guest editor from the technology world whom he declined to identify. He also said Details’ iPad issue is slated to be released in the fourth quarter.

At the party, Reynolds and Peres were joined by director Judd Apatow, “True Blood” actor Joe Manganiello, and Reynolds’ “The Change-Up” co-stars Jason Bateman, Olivia Wilde and Leslie Mann. Wilde got a taste of the media world for her next role as a young writer in the film “The Words,” co-starring Bradley Cooper and Zoe Saldana.

Reynolds tried switching roles with Peres for a second. After a photograph was snapped of the two along with Bateman, Reynolds reassured the editor, who’s been pulling long nights as the father of two-month-old twins and a toddler, that the picture would turn out well. “I’ll get you Photoshopped,” Reynolds said. “Don’t worry about it.”

WINNING WRITING: On Tuesday afternoon, “Morning Joe” hosts Mika Brzezinski and Joe Scarborough hushed a third-floor dining room at The Plaza hotel to present the 2011 Mirror Awards, the Newhouse School at Syracuse University’s honors for the best media writing of the year.

The winners were: Columbia Journalism Review’s Joel Meares for his profile of Liz Benjamin, the Albany-based political columnist and television anchor; New York Magazine’s Gabriel Sherman for reporting on Fox News last fall; Ken Auletta for his New Yorker profile of Afghani media mogul Saad Mohseni; Eric Alterman for digital commentary through the Center for American Progress; Jim Hopkins for work on his Gannett blog, and Mary van de Kamp Nohl, for her reporting on the fallout from Journal Communications’ initial public offering in Milwaukee Magazine.

Vanity Fair’s James Wolcott won the award for best commentary and began his acceptance speech by painting a picture of Rep. Anthony Weiner at the podium during his press conference the day before. “Life in America now is the theater of the absurd,” Wolcott said. “Working for Vanity Fair is not so much about working for a magazine, it’s like working for a theatrical company or the last great Hollywood studio.” He also compared the magazine to a “great ocean liner” before thanking deputy editor Aimée Bell and editor in chief Graydon Carter.

To round out the honors, New York University professor Clay Shirky presented Foursquare co-founders Dennis Crowley and Naveen Selvadurai with the Impact, Innovation and Influence Award, and Time Warner chief executive officer Jeff Bewkes presented Comcast ceo Brian Roberts with the Fred Dressler Achievement Award. Roberts, however, was unable to accept the award himself because he was in Lausanne, Switzerland, securing NBC’s $4.38 billion bid to carry the Olympics coverage from 2014-2020. “God help ’em,” Bewkes said on stage.

NEW CROP: Christopher Bailey didn’t look far when it came to casting for Burberry’s fall ad campaign. All of the actors and models shot by Mario Testino, including Felicity Jones, Cara Delevingne (younger sister to Poppy), Jourdan Dunn and Edie Campbell, all hail from Britain. “I was inspired by iconic British portraits and our own archive campaigns from the late 1960s of Jean Shrimpton using her trenchcoat to shelter herself from the poetic and romantic British weather,” said Bailey. “We wanted to create a group of portraits celebrating British actors, musicians and models.’’ The campaign will run across all digital platforms, including the brand’s Web site, Facebook, YouTube and Twitter.