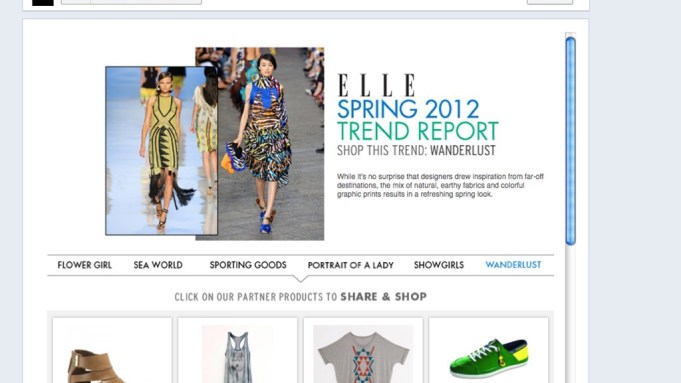 A new platform with enhanced social action buttons will launch today that aims to transform the notion of social commerce, or s-commerce.

Wade Gerten, founder and chief executive officer of technology solution 8thBridge, has spent the past year developing the platform, called Graphite. The software-as-a-service business model operates on a monthly fee basis and allows fashion and luxury brands to leverage social media without giving up brand control. It can also be integrated with existing channels and, for the first time, users can create shareable experiences outside the confines of Facebook.

Gerten has been vocal about the fact that it is people — and not brands — that drive social commerce. He told WWD in February that 90 percent of the shopping activity on Facebook stems from customers sharing products, offers and purchases with their friends. Because of this, he encourages brands to integrate their Web sites with Facebook’s new Open Graph technology.

Until now, 100 percent of all social commerce was conducted on Facebook — which is why industry experts say Facebook commerce, or F-commerce — or, more broadly, s-commerce — hasn’t really taken off. This is because, for multichannel brands, there are significantly fewer people engaging on their Facebook pages compared with their digital flagships.

“The funny thing is that if you added this number up, about 99 percent of [a company’s] interactions with the customer are not on Facebook,” Gerten said, adding they instead are on brands’ own Web sites.

Gerten believes s-commerce has also failed to take off thus far due to lack of visibility. It’s hard for customers to find social shareable offers which, again, could relate to lack of traffic; in order to find such offers, users have to go to a brand’s Facebook page.

This is where Graphite enters the equation.

On the product side, there’s normally been a Facebook branded “like” button and a Twitter button beside an item on an e-commerce site. Now, enhanced social-action buttons exist that can be unique to participating brands. For Gerten, the “like” button wasn’t expressive enough, as 57 percent of product “likers” already owned the product.

This means that Nine West, American Apparel and Elle magazine will implement buttons on Graphite such as “want,” “own” or “love”; e-tailer Nasty Gal’s social action buttons will read “Neeed,” with three “e’s,” “Gimme” and “<3 <3 <3” upon its Graphite launch in the next week, and Hallmark Cards will have brand-appropriate buttons that say “Tearing Up,” “Love,” “Smile” and “LOL.”

“If you press the ‘want’ button, then we share the fact that you want that red dress and post it to your timeline on Facebook, and then Facebook distributes [this information] to all of your friends and it shows up in your friends’ news feeds. It unleashes a whole bunch of people who want to share you with their friends,” Gerten said.

Additionally, it makes it easy for a marketer to test and try buttons with varying messages and figure out which ones get the most sharing from their customers. According to Gerten, it’s how the information gets shared that’s never been done before.

Normally, what gets shared is a link, but a link means users have to leave Facebook to check out a product, which they are reluctant to do. With Graphite, clicking on a social action button takes users to a shared, “shoppable story” — which 8thBridge estimates will receive nearly 18 times more views versus a link.

“If you press ‘play,’ a small branded store opens and you can zoom in on the item and see related products and you can shop and browse without leaving Facebook, but when you’re ready to commit, it takes you back to the brand’s digital flagship where you can finalize the transaction,” Gerten said of the “shoppable story” powered by 8thBridge (the brand can change the creative in the shoppable story through the Graphite dashboard).

Originally, 8thBridge had the point of purchase located on Facebook, too, since the team thought it added value to have checkouts occur on the medium. But after conducting research, they found that 82 percent of people buying on Facebook aren’t comfortable doing that yet.

“If you really want to scale up social and really monetize social media, it has to be more integrated than it has been,” Gerten said.

According to Sucharita Mulpuru, online and multichannel retail analyst at Forrester Research, Graphite has the most promise of anything that she’s seen in the Facebook arena. She calls it the one facet of the Facebook and social commerce equation that makes sense — as it takes “sharing” to an amplified level and consequently drives traffic back to branded Web sites.

“There is just more seamless sharing where you don’t have to log on every time you share, [as] your fundamental association with [the branded] site is through Facebook. Facebook can be your universal login; that’s what this is,” Mulpuru said.

Previously, Mulpuru believed that one of the only things that worked for Facebook with respect to social commerce was the “like” button — but the challenge there was that users were sharing on the checkout page and not necessarily on the product detail page. For her, the goals she hopes Graphite will achieve are getting people to log in with Facebook sooner, followed by using customized action buttons to encourage more friends to share.

Companies can get more value out of Facebook in this way, Mulpuru said, but she warns that it’s important that companies don’t expect to double their revenue overnight.

Nasty Gal, an e-tailer born entirely out of social media, will roll out its Graphite platform in the next week, and Nine West will do the same in June.

Also in June, Oscar de la Renta will launch the Graphite platform in tandem with the unveiling of an extensive Web site overhaul at oscardelarenta.com that’s being redesigned by Createthe Group. It’s definitely not the first time the luxury brand will work with 8thBridge — it worked on an F-commerce exclusive with the e-commerce solution late last year — but it is the most evolved s-commerce strategy the brand will be adopting to date.

“EighthBridge came to us last year and explained what was happening with the Open Graph. It seemed to us like this was an evolution from a club to a spear, a blunt instrument to a sharp instrument,” Oscar de la Renta ceo Alex Bolen told WWD.

He contended that, although the “like” button covers a host of responses, the brand’s custom gesture buttons — which will be “need,” “want” and “wore” — will be more nuanced and able to elicit deeper engagement and communication with fans.

It’s not just brands using this new technology. Elle is the first publication to incorporate Graphite into its Open Graph, according to the magazine’s senior vice president, publisher and chief revenue officer Kevin O’Malley. It is a result of a partnership with the editorial team and a slew of advertising partners.

Because it’s a consumer magazine and not a brand or retailer, Elle had to devise a way to incorporate Graphite into its digital strategy in a way that was relevant. O’Malley said the publication’s editors came up with six trends for spring, and Elle enlisted partner advertisers such as Havaianas, Equipment, Joie, Bebe, Longchamp, Michael Kors, Gucci, Nine West and Tommy Hilfiger to curate appropriate product based on the trend most reflective of their brand. Users have the option to select “love,” “want,” “own” or “buy” for each item.

“This is why we call this social commerce and not F-commerce, which implies something purely transactional. We are deliberately not implying that this is purely about the transaction. Quite frankly, we have no idea if Facebook is a transactional platform. We don’t know yet, it’s an experiment. We will let the consumer teach us that. What we do know is that its core proposition promotes peer recommendations and advocacy,” O’Malley said.

The platform will be unveiled at noon today during a live video-streaming event at 8thbridge.com/graphitelaunch.