The campaign encompasses the flagship windows, digital and social media channels, and magazine and newspaper ads.

Kathryn Gallagher of "Jagged Little Pill" in the Saks campaign.

Saks Fifth Avenue has unveiled a new fall campaign titled “Creating,” which recognizes creative professionals across a host of industries, from chefs and Broadway actors to artists and designers. The campaign encompasses the flagship windows in Manhattan, social media and digital channels, and magazine and newspaper advertising.

The Saks Fifth Avenue flagship windows, which go up this morning and will remain through Sept. 17,  will each feature a different creative environment from the fashion world, such as an atelier, a studio, or an unconventional space, highlighting the artistic process and featuring fall fashion available at Saks. Designer collections highlighted are by Stella McCartney, Brunello Cucinelli, The Row, and Victoria Beckham. 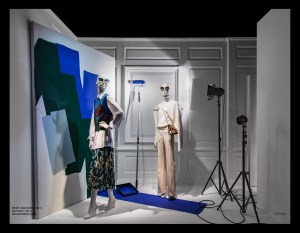 The images will run across Saks’ digital and social media channels, as well as in magazine and newspaper ads. One of the spreads spotlights the making of an Oscar de la Renta jumpsuit, showing the initial inspiration, product assembly, photo shoot and final delivery to the customer. 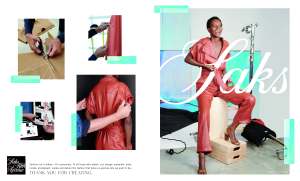 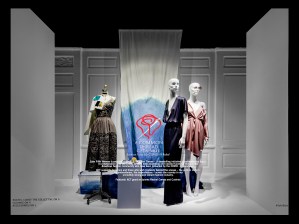 Emily Essner, chief marketing officer of Saks, said, “At Saks, we do strive to create purposeful campaigns. We’re always looking to use our platform to advance the topics that we believe are important to our customers and our communities. As we thought at the fall campaign and the interesting time we’re in, we thought it was the right moment to really honor the fashion industry and really recognize the vital role it plays in our society.’ 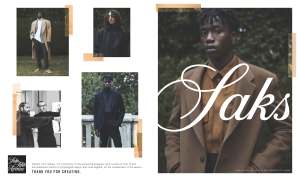 Saks ad featuring Jerry Lorenzo of Fear of God and Alessandro Sartori of Ermenegildo Zegna in their collaboration for the season.  Courtesy Photo

The campaign was shot by Anne Menke. 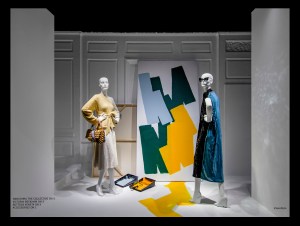 In other Saks news, the retailer said Thursday it is offering same-day delivery in Manhattan. Orders placed by 1 p.m. EST Monday through Saturday and by 11 a.m. Sunday will be delivered the same day, pending availability and credit card verification. Orders placed after the cut-off time will be delivered the next day. Delivery is available in Manhattan below 153rd Street. It is being launched as part of Saks’ ongoing partnership with ShopRunner. The cost is $25, or free with ShopRunner.