After a year of testing, EBay has begun the rollout of its Retail Associate Platform — and already has DSW, Nine West and Aéropostale on board. 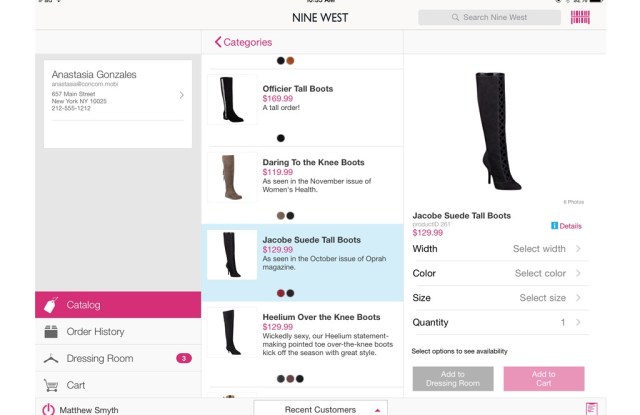 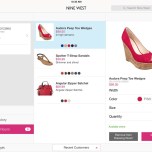 EBay is determined to make “omnichannel” more than a buzzword.

After a year of testing, the e-commerce and technology giant has begun the rollout of its Retail Associate Platform — and already has DSW, Nine West and Aéropostale on board. The tablet-based software was unveiled in late 2013 and offers participating brands a number of ways to enhance their offline experience by tapping into the online world.

This story first appeared in the January 13, 2015 issue of WWD. Subscribe Today.

Providing a mobile point of sale is a given. But the service also helps users measure store performance, locate inventory and access consumer databases, with specific information on purchase history and what items customers placed in their online shopping carts.

“Imagine you walk into Nine West and see a pair of boots but they don’t have your size,” Geisinger told WWD. “Traditionally, the process to get the boots in the right size has been complicated.” Now, the associate can see all inventory in real-time with the “Endless Aisle” application — from central fulfillment or other stores — so they can complete that sale for the customer then and there.

“The idea is to save the sale,” he said.

That’s an idea that appeals to retailers.

“Previously, we were limited to, ‘Here’s what’s in the store,’ but now we can get really smart about it and recommend a broader assortment and come up with recommendations that are relevant to the customer,” said Milton Pappas, Nine West’s president of e-commerce. “Before that, the iPad was just an order device.”

Nine West is in the process of rolling out Retail Associate in 10 of its full-priced doors in cities such as New York and San Francisco. For the time being, the only one of eBay’s suite of products it’s using is the Endless Aisle application.

Retailers have been talking endlessly about merging their on and offline presences, but oftentimes the results have been uneven, with brands exceeding in one aspect and falling short in another.

The drive for retailers to expand online has created a budding business for tech companies such as eBay, Amazon, Google and Alibaba that are looking to get a bigger piece of the online business by partnering with other brands. Most retailers could use some help in the digital realm given the sheer amount of dollars it would take to transform a retail operation and the expertise it would take to build digital capabilities in-house.

EBay’s program can help retailers handle mobile POS, tackle any fulfillment situation, show all inventory in real-time, tap into a universal cart that follows the customer from their desktop, to their smartphone to the store and eventually sync up to the dressing room digitally.

EBay has a total of 1,500 doors using the Retail Associate Platform across the U.S., with more starting to employ the technology during the first quarter.

The rollout of the Retail Associate Platform is perhaps eBay’s most aggressive effort at making omnichannel a reality, following the launch of its “Connected Fitting Room” late last year. Rebecca Minkoff was the first to implement the fitting room technology into her first flagship, followed by Nordstrom, which tested digitized fitting rooms in three of its doors during the holiday season.

Geisinger said the majority of last year was spent adding additional features to the Retail Associate Platform — like integration with third-party recommendation engines and point of sale platforms, the ability to accept cash and gift card payments and real-time inventory checks against other doors and the retailer’s Web site. The Retail Associate technology can now support promotions, coupons and price adjustments and works in tandem with existing loyalty programs.

So far, eBay said its omnichannel efforts are leading to consumers spending more.

From Thanksgiving to Cyber Monday, order volume from “ship from store” and in-store pickup increased over 30 percent — but sales grew by upwards of 50 percent.