The top 10 most searched-for brands of jeans online. 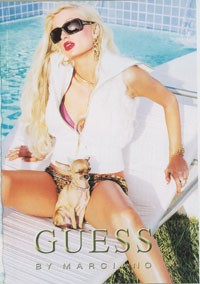 Hollywood has a knack for promotion. The styles that celebrities wear, whether to the grocery store, to work or to an event, can often send a fan online to search for the brands they are sporting. Other times, it’s just word of mouth. Jeans are the talk of the town, thanks to an influx of designer jeans brands in recent years. San Francisco-based Stylophane’s Brand Search Popularity Index tracks those brands that are most searched for online, utilizing popular search engines such as Yahoo and MSN. One subset of this index includes jeans. The number of Internet Searches in March totaled 683,046. “This index is really a brand awareness measurement,” said Alex Mendoza, partner at Stylophane. “Marketers and advertisers of these brands can see if the money they are spending is going to good use.”

1. GUESS
Searches: 98,598
Known for those signature black-and-white print advertisements, Guess has taken on such faces as Claudia Schiffer, Anna Nicole Smith and socialite heiress Paris Hilton to represent various Guess campaigns. The company pointed out that the staying power of the brand is due to its young, sexy and adventurous philosophy, and also stated that even though the brand is represented in clothing and accessories for men, women and children, it all started with denim jeans.

2. DIESEL
Searches: 93,652
Diesel is an Italian operation founded by Renzo Rosso and a group of his colleagues. The appeal of the brand is simple: Women and men of all ages like these jeans. Teen hipsters can wear them, as well as professionals who want to dress down on Casual Fridays. The brand has created some racy and controversial ad campaigns, shocking and intriguing audiences worldwide. Diesel also continues to expand and explore other fashion avenues, such as footwear, leather accessories and eyewear.

3. LEVI’S
Searches: 75,217
It’s the oldest and best-known brand of the top 10. Founded by Levi Strauss in 1853, the world’s most valuable pair of jeans belongs to this brand, according to “Guinness World Records 2005.” In 2001, a pair of jeans were sold to Levi Strauss for $46,532 on eBay. They had been discovered in a Nevada mining town and were thought by historians to have been manufactured sometime between 1880 and 1885.

5. APPLE BOTTOMS
Searches: 51,597
Attach a hip-hop star like Nelly to a brand of jeans and people will go online looking for them. Named one of Oprah’s “Favorite Things in 2004,” Apple Bottom Jeans by Nelly have hit the scene with the concept that they will adjust to any body type, especially those with a rounder backside. Apple Bottoms are made of 96 percent extra-sturdy cotton denim with 4 percent Lycra spandex.

6. VON DUTCH
Searches: 35,949
Brand recognition propelled Von Dutch into the spotlight, thanks to now-departed designer Christian Audigier. The “trucker hat” craze began when Von Dutch began placing its logo on plain, trucker-style baseball hats, sparking a wave of popularity and recognition for the brand. In October, WWD reported that Von Dutch sales jumped to an estimated $100 million in 2004, compared with $35 million in 2003, its second year in business.

7. CITIZENS OF HUMANITY
Searches: 30,569
“Some of these lesser-known brands, like Citizens, are beating out better-known brands these days,” Mendoza said. Citizens of Humanity is also part of the Los Angeles posse of designers who are climbing their way up this index, which also includes True Religion, Guess, Seven7 and Seven For All Mankind. “These L.A.-based jeans brands are hitting grand slams with their jeans designs,” noted Mendoza.

8. MISS SIXTY
Searches: 23,016
Some famous names who have been seen sporting a pair around town include Britney Spears and Alicia Keys. Mischa Barton, who is said to love skinny-leg jeans, also has a knack for Miss Sixty. WWD reported in 2004 that after establishing itself in major urban markets like New York, Los Angeles and Miami, the brand has begun enhancing its presence in Middle America, including cities such as Dallas and Atlanta.

9. LUCKY JEANS
Searches: 20,567
Lucky has mastered the world of product placement: Its jeans have been featured in such prime-time TV shows as “Friends” and “Felicity,” and on the big screen in “Scream II” and “28 Days.” The Lucky brand, owned by Liz Claiborne Inc., is sold in high-end department stores such as Nordstrom, Bloomingdale’s, Neiman Marcus and Dillard’s. Upscale specialty stores, including Buckle and Fred Segal, also sell the brand.

10. TRUE RELIGION JEANS
Searches: 20,325
In March, chief executive officer Jeff Lubell projected that “sales will almost triple next year as the brand continues an international rollout.” Lubell also pointed out that international sales now account for 46 percent of True Religion’s overall volume. The brand manufactures premium jeans that wholesale for $100 to $200 and command retail prices of up to $465.

Source: Stylophane, an e-commerce solutions company based in San Francisco.