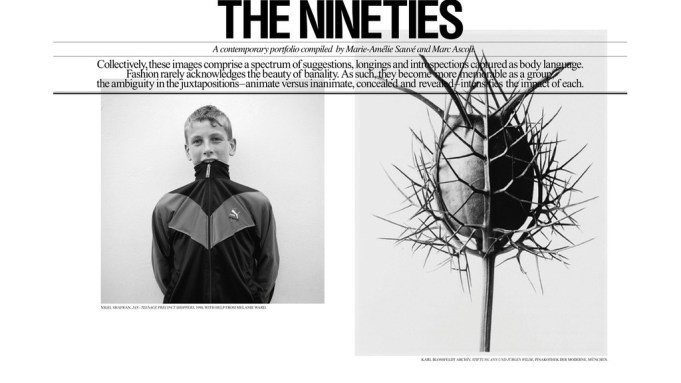 SELFIE SERVICE: French stylist Marie-Amélie Sauvé, tapped as guest editor of the next issue of Self Service magazine, due out Sept. 15, learned a great deal about the eclectic personalities featured in the issue — including intimates like Nicolas Ghesquière, artistic director of women’s collections at Louis Vuitton.

For example, it turns out Ghesquière has all the trappings of a serious journalist. Tasked with interviewing Sauvé, “He prepared questions and everything,” she marveled in an interview. “I was really open to talking, as I know him very well.”

Unifying the articles and the photos was a key mission for Sauvé, who observed that these parts often appear “disconnected” in magazines. Sauvé contributed six fashion shoots with photographers including Glen Luchford, Karim Sadli, Venetia Scott, Casper Sejersen and Jamie Hawkesworth. She also scored a rare interview with Steven Meisel, accompanied by a treasure trove of his early photos, including a street-style shot from the Sixties that puts many present practitioners to shame, as well as a portfolio from the Nineties chosen by art director Marc Ascoli.

The conversation with Meisel, as with other subjects in the issue, concerned “the fashion system, which is changing so fast,” Sauvé said. “The Internet is changing things a lot.”

The 365-page issues comes with three different covers, including one with Sauvé and Charlotte Gainsbourg flipping their hair. The French actress, a muse of Ghesquière’s, also turns up in fashion shoots.

French cosmetic surgeon Olivier de Frahan and Miuccia Prada are interviewed in the issue as well. Sauvé confessed she had never met Prada, despite all her years in fashion. “It was superinteresting to meet with her, and I think we connected very well,” she said.