Despite all the changes in the magazine world, the September issues remain relevant. At least, so far. Thick with advertising pages, the magazines represent a chance for the editors — not to mention the celebrities they feature — to underscore the core message of their brands. How do the covers this year compare with years gone by, and what do they say about the current status of the publication?

WWD asked a handful of creative directors to evaluate the September covers of the leading women’s fashion magazines.

Claim to fame: For Vogue’s 125th anniversary edition, the magazine commissioned four different covers of Jennifer Lawrence — including a painting by the artist John Currin. Featuring the Statue of Liberty on its newsstand cover, which was shot by Annie Leibovitz, prompted an assertion from an editor at the conservative outlet Breitbart that Vogue was taking a pro-immigrant stance.

Trey Laird, Laird + Partners: Uber classic. Because it is an anniversary issue, I think there was something beautiful in the classicism of it. There was something just very timeless and elegant about it. It felt very American and very iconic, and that’s really what that magazine represents for me in fashion. To do something for the 125th anniversary that feels timeless is absolutely the right choice. Anna’s great strength is knowing what note to hit at the right moment.

George Lois, advertising veteran: Is the Vogue cover really that simply designed? And inherently, an anti-Trump statement about his immigration policy? If so, terrific!

Richard Kirshenbaum, NSG/SWAT: Most iconic (but safest). Jennifer Lawrence is gorgeous, funny and the right choice for the September issue as America’s newest sweetheart. She looks positively stunning and in her classic Leibovitz pose. However,  If I was creative directing the Vogue cover and using the Statue of Liberty as a backdrop, I would have used the opportunity to pair Jennifer with a diverse actress to illustrate what the statue stands for and the immortal words of Emma Lazarus on the base.

Becky Wang, Crossbeat: My first thought was that they were trying to be reminiscent of “The Great Gatsby” or say New York is the center of fashion. So I actually feel like I am giving them credit by making it political. I am trying to give it a place in the cultural conversation, because I would expect that of Vogue. So I’m just going to give it to them.

Dennis Freedman: By far, the stand-out cover is the John Currin cover. It’s a great portrait of John’s that stands on its own. The simplicity of type respects the image. For me, this is the cover worth discussing. It inspires me.

Ferdinando Verderi, Johannes Leonardo: The role of magazines is changing. So is the role of magazines’ ultimate issue. I think Vogue is the only one with the authority and the responsibility to lead the industry to a new era. I can’t wait for a time in which the September issue’s cover will reflect this pioneering spirit. A cover, even when printed, is a message most of us will experience on a screen. Acknowledging this is the first step towards creating something that can take advantage of the way we consume information today. 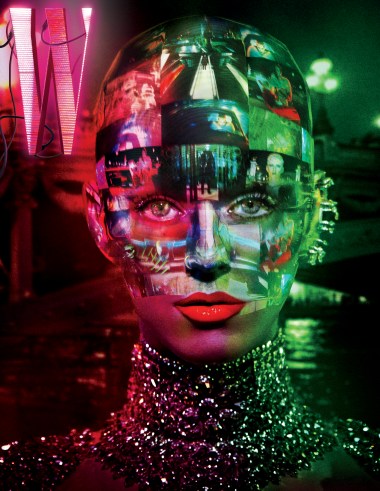 Claim to fame: W turned to augmented reality to make scannable pages that come to life with a custom app.

Laird: To me, the strongest one overall is W. Obviously that’s coming from a creative point of view, and I know there’s newsstand considerations and that type of thing. But it seems like one of the few that has a concept and an idea. All the different images inside her head are arresting, and I think that’s what great covers are meant to do. Ideally, they have an idea or hook beyond just a headshot, [which] is so much stronger. It felt like a whole concept. I just applaud that because I don’t think there are that many people doing that.

Kirshenbaum: Graphically most interesting and most interactive — W does a splendid job breaking the third wall between print and digital. Kudos for Katy Perry, who continues to innovate and  the W cover takes advantage of her extraordinary talent and new look.

Shahid: W is the most interesting. It’s way out there.

Verderi: What I find interesting in this Steven Klein portrait is the fact that it inspires us to learn more about the multiplicity of stories the image implies. It could be the door to a multilayered and multimedia storytelling system, which, if developed, could be a testament to how stories are experienced today.

Lois: W robotic cover is an eye-catcher. But the rest are same-o, same-o. 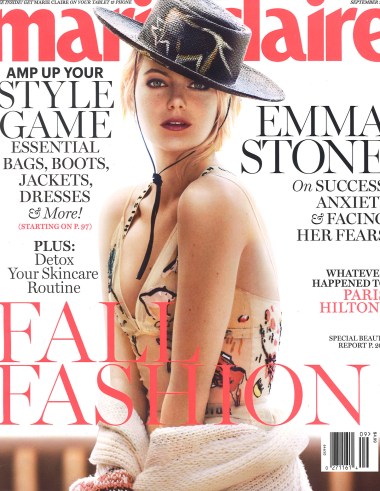 Claim to fame: Is that a hat?

Kirschenbaum: Best accessory Award. Emma Stone has attitude and rocks it with the choice of a jaunty Bolero hat!  Emma is great choice for Marie Claire. Again, if I was creative directing I am not sure of the meaning of the bolero hat— but it looks great!

Kirschenbaum: Billie Lourd is a Hollywood Princess from Hollywood Royalty. A perfect choice for T&C. She looks lovely and demure. That said, If I was creative directing I may have pushed a bit to strengthen the connection to mother Carrie Fisher and grandmother Debbie Reynolds…perhaps just a nod to heritage!?

Shahid: Don’t even get me started on that. It has nothing to do with Town & Country. There’s no class. Type screaming all over the place — unbelievable. There’s a desperation.

Shahid: It looks old and boring. She’s just staring at you with no feeling. It’s almost like they are desperate and think if they put a star on it that’ll sell it. There’s no conceptual idea. No emotion. 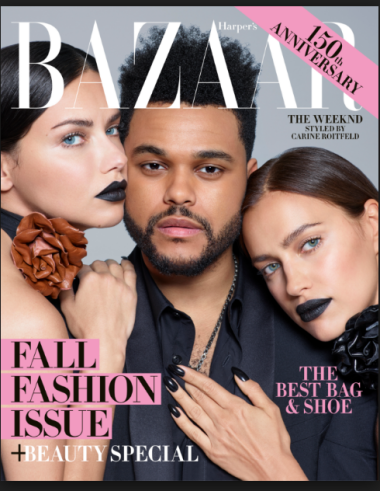 Claim to fame: The Weeknd is on a women’s fashion magazine.

Kirshenbaum: How can you go wrong with the Weeknd, Adriana Lima and Irina Shayk all color coordinated with black lipstick? The ménage is sexy and chic with Carine Roitfeld once again proving the French have great style and that Saint Laurent still has the juice.

Essex: It doesn’t seem like they went through a lot of trouble on the cover lines. I mean, the “best bag and shoe.” Really? It’s achingly generic. And to have their flagship issue with a man on the cover of a women’s magazine — that’s a little sad.

Lois: And are the black lips on the Bazaar cover inspired by “The Addams Family?”

Laird: I thought it looked a little messy to the eye. They used an outdoor picture, which was nice because so much is studio and controlled. It was an interesting idea that maybe didn’t all come together, but I applaud them for trying something different. It didn’t look just like a same-old same-old.

Shahid: It’s less tight. All that script chokes the image. They are trying so hard. Like Glamour will pop out because of the type. It’s really about the script, not the image. It’s claustrophobic. 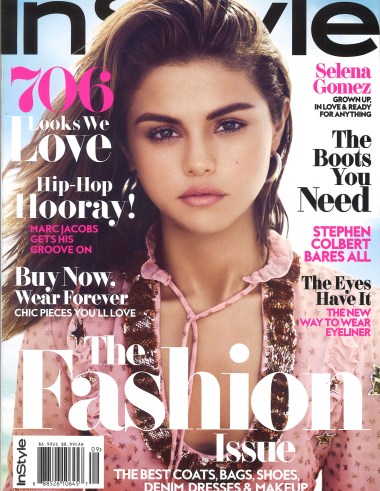 Claim to fame: One of two magazines that features a cover star who isn’t caucasian.

Shahid: You can really tell they are going to the common denominator there.

Wang: I commend InStyle for putting Selena on the cover, but it just wasn’t anything. It looked like it should be a May issue.

Essex: Utterly suffused with energy. The cover lines have a huge range from utility to entertainment to provocation.

Laird: I’ve never seen more type on the cover. I don’t even know how you’d fit more cover lines on that. But I guess that works for them. Different magazines have to serve in different ways. A magazine like InStyle has to sell like hotcakes at every airport newsstand in the country. I get that and understand. But as a visual, you don’t even think about the picture because of all the stuff on the cover.

Wang: Only two of the covers feature people of color. Still. In 2017. I think media is forgetting that there’s a really diverse audience out there. I think it’s a problem in media, and we need to come together as an industry to be more thoughtful about it.

Lois: Great fashion is created by hundreds of truly creative people, but the magazines that display their work are unimaginative and poorly designed. Gone are the days of Henry Wolf and Ruth Ansel and the earlier time of Alexey Brodovitch and Dr. Agha.

Shahid: Magazines are in trouble — we all talk about it. And they are not taking chances. They think this is what the consumer wants, but consumers can surprise them. They think putting a celebrity on the cover guarantees a sale? I don’t think so. I’m so disappointed where everything is going. Nobody is out there being conceptual like they used to be. All they say is that they have a celebrity on the cover. Nobody knows what to do in the magazine world. If any time is a time to take chances it’s now.

Laird: At this time when magazines are in such peril and the industry is facing such challenges, and newsstand is such a dying concept anyway, it seems like people would almost take more chances and be more disruptive and really go for it. If one of those magazines was my client, that’s what I would tell them. I don’t know if it’s a battle of the newsstand wars anymore. Or if it is, it seems like a dying battle. And I’m a print fan. I think it’s still a super-exciting medium and can be used in so many ways. As a lineup, it didn’t feel like a powerhouse September based on other things I’ve seen before.

Sources: Jennifer Lawrence to Be on the Cover of Vogue’s September Issue