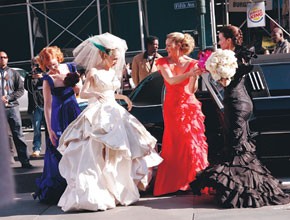 Believe it or not, there are women out there who did and do not watch “Sex and the City.” Not during its six-season run from 1998 to 2004, nor in the subsequent four years it has been available on DVD, HBO On Demand or in syndication almost nightly on TBS. And these women aren’t necessarily bumpkin conservatives, but fashion-devouring city gals, as well. C–k talk and shameless puns aren’t for everyone, after all. Still, here’s betting that, whether or not they followed Carrie’s, Charlotte’s, Miranda’s and Samantha’s quests for happiness in New York, more than a few of those “Sex”-less women have donned a giant flower pin, flaunted Manolos or pined for a Birkin bag in the past 10 years, after an “SATC”-fueled fad gripped the masses. The HBO series was a fashion force that, thanks to Sarah Jessica Parker’s effervescent Carrie Bradshaw and her costumer, Patricia Field, exposed a mainstream audience to flamboyant style extremes. It sparked trends like the flowers, the shoes and the general funky flash, and, according to some fashion editors, even spawned a backlash of Belgium-inspired austerity a few seasons ago.

So, when “Sex and the City: The Movie” comes out from New Line Cinema on Wednesday, legions of loyalists hope to learn more than the answers to the obvious questions: Will Carrie and Big get married? Will Charlotte finally get pregnant? Will Samantha stay with one man? Will Miranda be happy with Steve and son in Brooklyn? Everyone who goes to see this movie also wants to see the clothes. It’s a fact the producers are well aware of and acknowledge outright. Just after the opening credits roll comes Parker’s familiar girlish voice-over, declaring that the female New York experience comes down to “the two Ls: labels and love.” Such shallow reductionism is an “SATC” signature. And the producers get credit for sticking to their shtick: style, sex and shameless puns (Lost Angeles, anyone? How about a Mexicoma?), enough to roll your eyes right out of your head. When it came to the clothes, they went for visual overload. The label-dropping — Chanel, Prada, Vera Wang, Carolina Herrera, Oscar de la Renta, Christian Lacroix, Vivienne Westwood and, of course, Manolo Blahnik, whom Carrie did not trade in for Christian Louboutin — is intense. That Carrie, in all seriousness, states that a Richard Prince Louis Vuitton bag is “the best money I ever spent,” says it all about the show’s, and now the movie’s, priorities.

Style-wise, the supporting cast is, for the most part, as it was. Charlotte is still prim in printed sundresses and generally perky, uptown attire. Samantha is perhaps bigger and bolder than ever in over-the-top, often unsightly, getups, as in canary yellow and emerald green jackets belted over white pencil skirts and topped off with door-knocker earrings. Such gaudy, where-did-they-find-it (Dallas?) garb makes Kim Cattrall’s now-infamous reluctance to sign on for the big-screen production understandable. Still, it’s par for Samantha’s course. If anyone experienced a transformation, albeit a mild one, it’s Miranda. Whereas in the series, Cynthia Nixon’s cynical high-powered lawyer sometimes dressed as a quintessential corporate stiff in stark suits and boring basics, here she is fully, believably chic in tweeds, earth tones and graphic prints, often accessorized with demonstrative geometric jewelry.

Of course, the fashion story was and always will be about Carrie, a character, who, thanks to Field, holds dual titles as television’s best and worst dressed. To the well-trained, high-fashion eye, Carrie’s 81 costume changes make up perhaps the most metaphorical wardrobe in cinematic history. For half of the film she comes off as a polished, uberfashionable grown-up; the other half, she’s the quirky, experimental fashion trailblazer/victim. Polished Carrie is done up head-to-toe in resort and spring 2008 trends: florals, like a gem-studded YSL sack dress, and full-skirted frocks made a little edgy with a studded black leather belt — even studs have gone uptown. It’s hard to find fault with any of these looks — most were featured in every fashion glossy out there last season. They’re intentionally perfect — too perfect for the sake of the plot. This is, after all, a character who for years eschewed the obvious in favor of her own eclectic style, which included tie-dyed tanks, midriff-baring tops and biker shorts, all while being over the age of 35.

At her best — or worst, depending on how you see it — Carrie entertains and impresses with imaginative combinations. As for her outrageous, often tacky, taste, she pulls it off with the help of Parker’s taut, toned and all-around tiny figure — enviable on a 22-year-old woman, almost unthinkable on a 43-year-old — that can make even stonewashed, button-fly jeans look good. Or an all-black ensemble of a tarlike puffy coat, topped with a fedora; not to mention a pair of pajamas paired with a fur coat, white high-heel booties and a sequined beanie. Indeed, it’s a taste of the wacky, and totally in character. Still, it fails to deliver the same euphoric fashion rush as did the series. Even the montage of Carrie cleaning her closet of supposed-to-be-shocking Eighties garb is too familiar to have the impact of, for example, that green satin ruffled-butt miniskirt she casually wore to dinner with Big during season six. That’s the problem. In the 10 years since the show started, dedicated “Sex” maniacs have become so used to Carrie’s style — her wild, tacky and impossibly theatrical gear — this time, including the film’s grand showpiece, a Vivienne Westwood wedding gown and veil, festooned with a bird, it’s impossible to shock them. Fashion-wise, the in-the-bag blockbuster “Sex and the City: The Movie” is definitely fun, but not enough to get carried away.