Shoppers Tune In for Fashion

As the economy continues to topple, consumers are awaiting the return of their favorite shows, which allow them an escape and plenty of fashion tips. 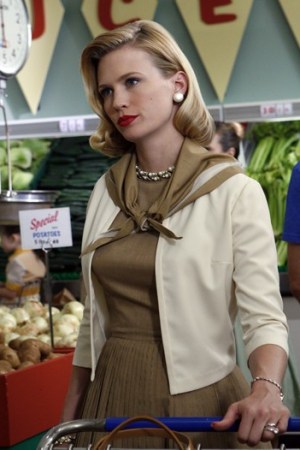 As the economy continues to topple, consumers are awaiting the return of AMC’s “Mad Men” and the CW’s “Gossip Girl,” two shows that let them escape their cares and pick up plenty of fashion tips, albeit classic ones.

While shoppers are still flocking to stores with tabloid photos of celebrity looks they would like to copy, many are faced with more prim and proper options like ones worn by Madonna and Katie Holmes. Similarly safe and borderline matriarchal looks are mainstays on “Mad Men,” a series about the advertising business in the Sixties, which returns for its second season July 27. Equally backbiting is “Gossip Girl,” a fashion-infused teen drama that will air again in September.

Robert Thompson, director of the Center for the Study of Popular Television at Syracuse University’s S.I. Newhouse School of Public Communications, said these two shows are good examples of how a program can spread a fashion virus. In addition, celebrities have become society’s common culture, since there are so many outlets for entertainment today. “But that isn’t to say TV shows can’t create a hairstyle or launch a look that will be great,” he said.

Viewers’ interest in “Mad Men” coincides with shoppers’ renewed fondness for more sedate styles like cashmere cardigans, sheath dresses and pencil skirts. Holt Renfrew vice president, fashion direction Barbara Atkin said the show’s popularity isn’t such a stretch. “It’s relevant now, because now is a time of such uncertainty economically and politically. The pendulum is swinging back and forth, and at the moment things are very conservative. We’re seeing a lot of bow blouses, sheath dresses and little sweater sets.”

Aside from being accessible to everyone, “Mad Men” is “a real examination of the Sixties” that spotlights “a pulled-together, coordinated look,” she said. However familiar JFK voters may be with the trend, younger women are tapping into the style for the first time, Atkin said. Michael Kors is right in step with this trend, and Prada has done it well in the past, she added.

“To me, it’s like looking at Grace Kelly through the lens — the tight little knit sweater and a full midlength skirt,” said Atkin. “We already know the pencil skirt will be a key [fall] trend. Then there’s the clutch bag, strands of pearls, clip-on earrings. And all these beautiful sheath dresses will be very important. If you look at a lot of these things, they look like they came right out of ‘The Official Preppy Handbook’ or Hitchcock styling.”

The collegiate chic style exemplified by Leighton Meester, Blake Lively and other cast members of “Gossip Girl” is another driving force, Atkin said. Their mixing of schoolgirl kilts with little blazers and Christian Louboutin shoes is a winning ensemble with Holt Renfrew shoppers. “Again, it’s a very interesting outtake of ‘The Official Preppy Handbook.’ There are all these young girls who are obsessed with bags and with shoes. They are also taking tiaras, headbands, prom dresses and polo shirts and mixing them with designer clothes, which makes for a really interesting look,” said Atkin.

Last month, Bloomingdale’s jumped ahead of the “Mad Men” hype by showcasing conservative looks in its flagship windows that easily could have been used by the series’ costume designer. The retailer partnered with Theory to get just the right look — nipped-in waistlines, suits and jewel-toned dresses, according to Anne Keating, senior vice president of public relations at Bloomingdale’s.

“What’s going on with the economy is not going to affect how people spend money on entertainment. They are still going to movies and to Broadway to see the show they really want to see. People are always going to want to watch some sort of recreation,” she said. “We always look at pop culture — what’s happening on TV, in the movies and at the theaters.”

Michael Kors used “Mad Men” as a reference point for his fall collection, and subsequently met creator Matthew Weiner after the show and hit it off. Having worked with AMC for an online promotion/gift-with-purchase, the designer will host a private screening for the show tonight for fashion editors at the Bryant Park Hotel, the only premiere outside of the one planned in Los Angeles.

Lord & Taylor’s senior vice president of public relations Lavelle Olexa agreed the program has a resounding influence. “To some degree, movies and TV programs manage to bring clothes to life in a way that runway shows, ads and billboards can’t,” she explained. “Everything in reality is about lifestyle. Seeing fashion in a setting makes it become more relevant and more enchanting.”

The irony, of course, is that flicks and TV programs are not reality, and in the case of “Mad Men,” consumers are drawing on trends from decades back. “What people are watching and reading is always a clear barometer of where we are heading. Given the issues of the day, it would appear that we are turning toward a more conservative time,” said Olexa, adding that longer-length dresses are also in demand. And like many others, she said, “The role of any retailer is to keep in tune to any influence, because you don’t know where it will come from. The moment the customer walks in the door you want to engage them. We all have to be a little more intuitive.”

Testimony to that is the popularity of “Mad Men”-inspired looks like pencil skirts, bow blouses, belted sweaters and cashmere cardigans. “It’s very classic and very Lord & Taylor actually,” she said. “Someone told me that in one of the first episodes, the secretaries talk about going to Lord & Taylor to buy twinsets. Our cashmere collection this year is wonderful, so I hope that is true.”

The retailer has been featured repeatedly on “Gossip Girl” and that collaboration remains one of the most important ones to date. But Watson noted there are other contributors to the schoolgirl-preppy look, which started with André 3000 of the musical group Outkast, and has been picked up by other musicians like Vampire Weekend and Chester French. She also pointed to “Mad Men”-inspired retro glam as a pop culture trend. Rock chic, which Balmain captured, may be linked to rockers’ daughters coming of age like Keith Richards’ girls Theodora and Alexandra, Watson said.

She said MySpace is one of the greatest influences on fashion today. Aside from fulfilling Andy Warhol’s vision that “in the future everyone will be famous for 15 minutes,” it has also made them “instant celebrities,” she said.

“MySpace is a platform for self-expression, personal broadcasting, human contact, discovery of culture, and is a creative hub of readily accessible ideas,” Watson said. “So when we talk about how fashion is all about the individual style, it is the influence of pop culture promoting the individual through self-expression platforms like MySpace.”

Quantifying the Web site’s influence on fashion is tough, but it does have more than 40,000 designers and offers a global platform. Bendel’s uses MySpace to seek new talent and has found such standouts as Poltock & Walsh. MySpace also taps into younger shoppers, who in turn affect their parents’ buying decisions. “Children have an amazing influence on their parents’ purchases as parents still want to feel young and in touch. If their children think [Louis Vuitton] is cool, it just makes them feel better about their purchase,” Watson said.�