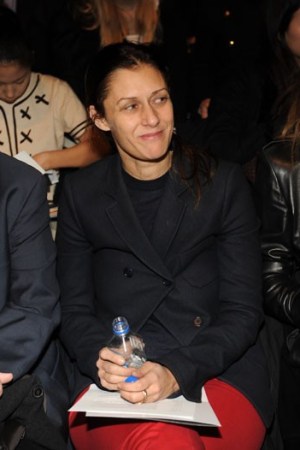 Last Thursday at 7:30 p.m., the editor of T: The New York Times Style Magazine was sitting at the bar of El Quijote, a Spanish restaurant in her home at the Chelsea Hotel, talking about her second issue of T — the women’s fashion issue. While working through a small bottle of cava, she was fixated on one of the stories inside, which has absolutely nothing to do with fashion. It is an excerpt from Sigrid Nunez’s new book, “Sempre Susan,” about the author’s relationship with Susan Sontag and her son David Reiff.

“For me, it’s what I want from The New York Times on a weekend,” said Singer, 45, her voice picking up. “I want a good, sexy, neurotic story about New York literary life in the Seventies. I want the New York Review of Book parties. I want a little Farrar, Strauss and Giroux. You have that literary dream of New York. It’s got it all.”

It’s striking for an editor of a fashion-heavy luxury magazine to assign a piece like this, but then again, it’s not surprising. Elsewhere in her women’s fashion issue, which comes out Feb. 27, there’s an article by Times movie critic A.O. Scott that’s ostensibly about actor Tahar Rahim, but is also largely about changes in French cinema. In Singer’s debut issue of T, back in December and meant to mark the holidays, there was a book excerpt about autism; a mini-feature on Feisal Abdul Rauf, the man behind the downtown mosque, and another little piece on Julian Assange.

But isn’t this T? Why so serious?

“I want to make sure that the reader who reads the front page [of the Times] doesn’t think of T as this strange dispatch from ‘Project Style’ that they can toss away with everything else,” said Singer.

In her mind, T doesn’t need to win over the fashion crowd — she assumes she has that base covered. Singer wants stories in her magazine that attract the newspaper’s broader readership — those who, say, devour the Week in Review. This can be done with a book excerpt, a personal essay, or political analysis, she said. In her men’s issue, which comes out in March, she said she doesn’t use many models (“That’s a very big departure for T — not to use male models”), but puts clothes on “interesting people” in un-model-like poses. Her T reflects an eclectic slice of life: autism; fashion photo-spreads; French cinema; Terry Richardson photos.

“I think that she’s really focused on presenting fashion and culture through her own zeitgeist,” said Vogue editor in chief Anna Wintour, who was Singer’s boss for 11 years. “Sally’s always had an unusual take, a quirky take on everything. For a newspaper like the Times to have someone so well rounded and intelligent and so aware of everything that’s going on in the world way beyond the tiny world of fashion, it brings so much depth to everything she’s doing in the pages.”

And now she’s taking a magazine that was overly a luxury book — there are 15 issues in all on travel, design, women’s and men’s fashion — and retooling it. She is trying, as she put it, to “place T on a continuum from the front page” of the newspaper. The question is whether Singer’s pursuit of new readers is messing around with the solid franchise T has become. T, after all, is a magazine that’s primary value to the Times is how much money it brings in; it has never been a journalistic mission.

Indeed, for years, T hasn’t been exactly held in high-regard in the Times newsroom. It was a foreign and exotic little creature that seemed distinct from the rest of the paper, but it worked in a very important way. T has been a cash cow during a difficult time at the newspaper. In 2007, the supplement in its various editions generated $45.7 million in revenue. It has been lauded as an “extraordinary” business by Times publisher Arthur Sulzberger. And despite a recession, and a collapse in luxury advertising, T is still profitable.

During all this time, the company’s editors and executives have been explicit about its role. Times executive editor Bill Keller put it bluntly enough to his newsroom shortly after T was created: “Well, the reason why we’re inventing these sections, I think, is obvious: They generate the revenues that help subsidize the stuff that drew most of us into the business.”

Enter the Singer experiment. She was hired last June to succeed Stefano Tonchi, who left the Times to become editor in chief of W. Among a certain class of New York media type, she’s worshiped. Singer worked at Vogue; she has a toe dipped into the literary world; she’s an intellectual who lives in the Chelsea Hotel with three adorable sons. She’s cool. It’s no surprise then that a former books editor — who casually name-drops Shakespeare scholar Marjorie Garber in an interview — wants a more bookish magazine.

And even if T worked exactly the way that Keller wanted it to, he has given her a mandate to change it.

“Stefano invented a terrific magazine, but I’m sure even he would agree that by the time he left the formula was starting to feel a little shopworn,” said Keller via e-mail. “We recruited Sally with the understanding that she would do exactly what she is doing: Refresh the look, restore the dazzle and surprise, and add something that was never Stefano’s priority: articles that an intelligent reader might actually want to read.”

When Singer was told that the newsroom perceived T as the soft section at the Times, she looked down at the musty floor in El Quijote.

“I hope they don’t say that anymore,” she said.

If retooling a successful franchise without messing it up weren’t enough, a second hurdle for Singer will be a way to coexist with another new editor in the building: Hugo Lindgren, who was hired to edit the Times Magazine in September. Both are outsiders, and like some strong-willed editors, they both have fairly high opinions of themselves. And, according to sources, there’s already some tension between the two.

Back in the summer, before Lindgren’s arrival, Times department heads and editors gathered to meet Singer. She’d only been in her new job for a matter of weeks, and was asked by an editor if, as an outsider, she had any advice for the next Times Magazine editor?

“Fire the entire art and photo departments,” she said, according to several people familiar with the meeting. (“I can’t comment on that,” Singer said, when asked about it).

Since Lindgren was hired, he has decided he likes the photo staff just fine and has kept it intact. It hasn’t made for the most comfortable working relationship on the sixth floor where the two magazines are located, especially since Lindgren plans to introduce more photography in the back of his reinvented magazine that will debut in March. There is potential for fashion stuff, and sources said Lindgren reached out to Singer to see if she wanted to collaborate on the back pages. (A few years ago, when the weekly Sunday Magazine ran style pages at the back, then-editor Gerry Marzorati farmed that content out to T editor Tonchi). But the Lindgren-Singer talks about the back pages haven’t gone much of anywhere, those sources said. Her opinion of the Times’ photo department hasn’t helped much. And part of the problem is that Singer reports directly to Keller, and not to Lindgren. (Tonchi used to report to Marzorati).

Both Singer and Lindgren said that it would be a “joint” decision to figure out how to handle those back pages.

If Singer is just beginning to learn how politics at the Times works, she certainly has no illusions that life is a little bit different at her new job.

“Vogue is at the heart of what Condé Nast is,” she said. “Well, I don’t know if that’s true, but you think that it is. I don’t think T is the core of the New York Times. The core is the third floor of the newsroom and what runs on the front page. That’s a different relationship.”

Nevertheless, she sees it as her mission to make sure that the “line between what happens on the third floor and the sixth floor is a little bit fuzzier than it used to be.”

And certainly is making itself clear through a more idiosyncratic magazine, one where Singer “shines through on every page,” as Wintour put it in assessing her first two issues.

Being blunt, though, isn’t there the danger that stories about autism and Susan Sontag’s assistant in the Seventies, as interesting as they are to Singer and the non-obsessed fashion reader, might scare off advertisers? Even if Tonchi’s model of T may not have been a fan-favorite among the journalism elite, it got the job done, especially in the eyes of Arthur Sulzberger Jr. Is Singer concerned at all for being on the hook for drawing in advertising dollars and acting as editor-publisher in a way that no other editor in the building has to worry about?

“I think advertisers want to be in a magazine that is read by educated people who have the means to understand their product and possibly consume their product,” she said.

“I don’t think a luxury book simply contains products that cost a certain amount or look a certain way or are made in a certain place,” she said. “The definition of luxury is bigger and broader than that. It’s a bigger experience than that.”

Her mission, as she sees it, is less about advertising concerns.

“The newsroom at The New York Times wants a level of journalism — magazine journalism — that is worthy of the Times,” she said. “That’s my job. To pull it off. My way of pulling it off might be slightly different from how my predecessor did it.”