Sischy, Brant Take on Vogue… Helping However They Can… 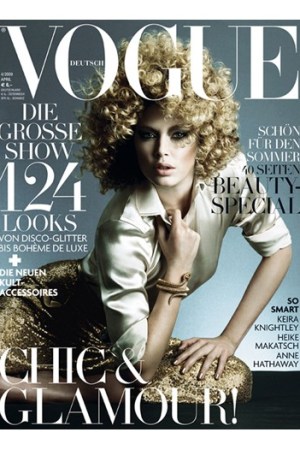 SISCHY, BRANT TAKE ON VOGUE: Ingrid Sischy and Sandra Brant are moving farther into Europe — and into Vogue territory. On Monday, the two were named international editors of German Vogue and Russian Vogue, according to Jonathan Newhouse, chairman of Condé Nast International. They hold similar titles at Italian Vanity Fair and Spanish Vanity Fair. “Ingrid and Sandy are a unique journalistic team, full of ideas and with strong ties to the worlds of Hollywood, fashion and the arts. They command enormous respect in the industry,” said Newhouse. “It is great that they can contribute their considerable talents to our magazines in these four markets.”

Sischy and Brant joined the staff of Italian Vanity Fair in May, and Spanish Vanity Fair when it was launched in September. The Vogue and Vanity Fair roles were specially created for them by Newhouse. The duo’s role is to leverage their contacts and experience over a broad range of fields including fashion, film, theater and the arts. Brant was previously the chief executive officer, president and publisher of Brant Publications, which published Interview, Art in America and The Magazine Antiques. Sischy was the editor of Interview. Sischy has been a contributing editor of American Vanity Fair since 1997. — Samantha Conti

HELPING HOWEVER THEY CAN: Seventeen magazine recently launched a full-service creative agency, Seventeen Solutions, and while running an in-house agency isn’t exactly a new idea in the magazine business, it’s becoming more popular than ever in light of the economy. Such agencies can provide a more streamlined approach for brands to connect to a certain audience — and, more importantly, for publishers to attract more ad dollars.

Seventeen’s agency uses research the magazine already has from teens to develop and produce ads for companies such as Procter & Gamble, Macy’s and Johnson & Johnson. “If my clients want to know how teens are acting and behaving because of this recession we can help them,” said Jayne Jamison, vice president and publisher. “We have 1.4 million unique visitors on our Web site and we can do our research there quickly and easily.” So far this year, Seventeen Solutions has created 26 ad pages. Jamison said the services offered by the in-house agency include conducting a model search to holding photo shoots.

Other Hearst Magazines titles that run their own agencies include Harper’s Bazaar’s Studio B, Town & Country, Redbook and Good Housekeeping.

Seventeen’s main competitor, Teen Vogue, published by Condé Nast Publications, has had a creative agency in place since the magazine made its debut in 2003. Lauren Jay, associate publisher, marketing, said the magazine shoots models, as well as readers, which provide a “peer -to-peer endorsement.” (On that note, the magazine will launch its second retail concept store in The Mall at Short Hills, N.J., from Saturday through April 26.) Lucky also creates custom advertising, as do Vanity Fair and Vogue Studio, which has been around for six years and created ads for brands such as Adrienne Vittadini, Via Spiga, Dillard’s and Wal-Mart. GQ has had an agency in place for almost 30 years, called the GQ Design Group, which has paired top photographers with brands such as Hanes, Yamaha Star motorcycles and Disney World and shot celebrities such as Russell Simmons, Jimmy Fallon and basketball star Carmello Anthony. — Amy Wicks