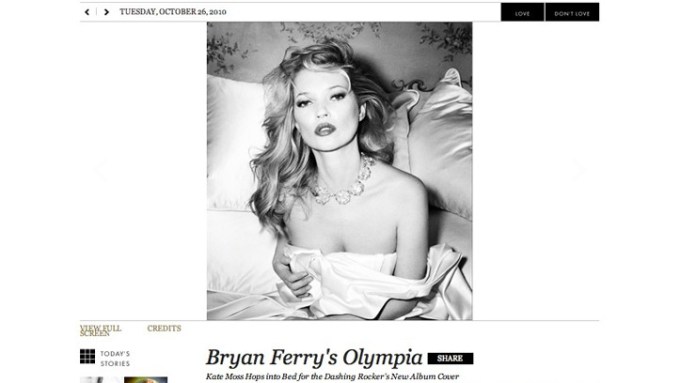 Bold color may have been the new black on spring runways, but when it comes to the influx of designers creating branded content on the Web, editorial is the new advertising.

“We’re publishing content in an authentic way, and if it’s increasing our brand awareness, then it could be defined as advertising. It’s a new way of communicating with consumers,” Miki Berardelli, chief marketing officer at Tory Burch, said of the changing definition of advertising. “It’s taking an editorial approach to telling your brand story, and the social-media space just lends itself so beautifully to that combination.”

Editorial-style content from brands is nothing new — it’s just become a more integral part of marketing in the social era and a fresh way for a company to position itself. And, as magazines cut staff or shutter altogether, the new editorial focus of fashion brands is providing a soft — and sometimes lucrative — landing spot for journalists and editors.

There’s only one hitch: branded editorial content from the likes of Ralph Lauren, LVMH Moët Hennessy Louis Vuitton’s Nowness, A|X Armani Exchange, Diane von Furstenberg, Tory Burch, Donna Karan and Juicy Couture — as well as retailers such as Gilt Groupe, Club Monaco, Barneys New York, Saks Fifth Avenue, Topshop, Net-a-Porter and Urban Outfitters — is, naturally, branded. The more fashion firms and retailers push into “editorial,” the greater the debate gets over that age-old dilemma: what is the line between editorial, advertising and advertorial?

And do brands — or the consumer — really care anymore in this information-all-the-time digital world? After all, fashion magazines blurred that line long ago — just check the credits in fashion shoots against what labels advertise.

Bernd Schmitt, a professor at Columbia Business School with expertise in branding and marketing and the director of its Center on Global Brand Leadership, said it’s a clever strategy for fashion companies to utilize editorialized content, since it’s considered more “trustworthy” to consumers and worth paying more attention to than traditional advertising.

Consumers know that branded editorial isn’t objective, and they have no problem with that, contended Schmitt. They’re on a quest for a broad range of information, and they have control over which brand’s Web site they want to visit and which they don’t.

“What they’re looking for is information and tips, and brands are no longer just about the clothing but about a broader lifestyle. They’re looking for some sort of guidance,” Schmitt said. “Of course, the company owners get something out of it, because they have a better way of reflecting their brand for a lifestyle perspective. Everybody gains.”

He acknowledged that an issue exists at the point where editorial stops and advertising begins, but he believes this development is a positive one — it’s the consumers’ decision to immerse themselves in this content.

The dovetailing of editorial and advertorial aids in building a more personal relationship with the consumer and drawing them in. “It’s about getting a brand message across in a much more engaging and exciting way than a pure print advertisement. You’re telling a story, making it more emotional and getting the consumer to be more interested in that story. You’re entertaining her, and that’s how you’re getting her attention, which is more effective than saying, ‘Go buy this shoe now,’” said James Gardner, founder and chief executive officer of the digital agency Createthe Group.

This new way to advertise has only been made possible by the advent of social media, according to Gardner. After seeing the power of marketing effective viral content, brands are scurrying to invest in this type of material — and in many cases, are cutting back on their traditional advertising spending as a result.

But traditional advertising won’t disappear completely, since it serves a different purpose than digital efforts, which remain in their infancy as brands try to determine whether the quantity of audience they are getting online really equates to the quality of reader they get in print. Magazine ads still provide a better return, given the quality of the audience. For the moment, the quantity of online viewers can’t compete with that.

“It’s completely different,” David Lauren, executive vice president of advertising, marketing and corporate communications at Ralph Lauren, said of print versus digital advertising. “Our print advertising is showing our brand in a way that’s appropriate for a print medium, and what we do online is create context that helps fill out our story. With a single page, you’re limited, and online you have as much space as you want. It’s unlimited.”

“It’s entertainment. It’s the convergence of entertainment and marketing, and the effect on the consumer is a more rich experience. It’s a message that they can be a part of and interact with instead of it being broadcast at them,” he said.

In the new world order, a company must utilize a combination of bought, owned and earned media to most effectively reach its target demographic, Jarrold explained. Bought media consists of traditional advertising, such as banner and print ads; owned media is content produced by the brand, and earned media is the word of mouth a company drives, which is generated by bought and owned media.

“Twenty years ago, ‘word of mouth’ was a big buzzword, and now social media is very much that. Social media sites have created a platform that can really amplify a message,” Jarrold said. “But you need all three. Bought gets you volumes of people, and earned gets people talking about the brand and more of an emotional interaction. All the forms are credible, but some of the earned media is personal and more interactive.”

Original editorial is also valuable from a sales perspective, said Meredith Fisher, Diane von Furstenberg’s former digital media director who now consults for the brand. The editorial content is advertorial to an extent, but she believes the reason it works is because the brand is transparent about the message it’s putting out. Some users visit the Web site just to shop, and others want to explore the brand with no plans to purchase — although the editorial might educate them about the brand and inspire them to shop, she said.

How much it’s doing that remains debatable, however. A study examining the effect of social media on e-commerce sales, conducted for the second consecutive year by ForeSee Results, found that 5 percent of shoppers interviewed had been prompted to purchase by social media. “It’s still a small amount. It was about 5 percent last year, too. We didn’t really see it grow from year to year in the study,” said Kevin Ertell, vice president of retail strategy at ForeSee Results. He still believes there is ample opportunity for retailers when it comes to the medium, however.

Although Fisher declined to comment on whether traditional advertising budgets are cut to pay for digital editorial content, she acknowledged the brand is able to measure the return on investment. “The benefit of editorial online is that we’re tracking and monitoring everything,” she said. “We measure based on direct transactions, but also on inbound links and levels of engagement.”

The company views ROI as more than just sales, using rubrics such as Rate of Interaction (how fast consumers are responding), Route of Information (where the information is coming from) and Response of Individuals (zeroing in on which voices make a difference and creating nonfinancial connections).

Depending on their goals, marketers have different ways of measuring the success of the editorial-style content they create. For A|X Armani Exchange, Jarrold said digital marketing performance and ROI are measured both quantitatively and qualitatively. For the former, the brand analyzes metrics such as impressions, clicks and conversion. The latter is based on engagement and comprises time spent in the digital space and page views.

However, there are ethical implications in editorialized brand content no matter how honest and authentic a company might claim to be. Although this content appears to be editorial, it’s still a form of advertising — which means the message being delivered is still a controlled one.

Take LVMH’s Nowness, a digital magazine launched last February whose mantra is that it’s a brand that talks about other brands and has coverage of brands outside the LVMH umbrella, including rival fashion companies such as Chanel, Burberry, Rodarte, Dolce & Gabbana, Fendi and Hermès. “It’s about authenticity and gaining the trust of your readers,” said executive vice president Kamel Ouadi. He believes it’s not about the idea of advertising — if the content gives consumers the tools, they are empowered and can discover. There’s also an emphasis on quality over quantity. Nowness.com publishes just one story a day.

DKNY’s editorial content often covers topics unrelated to the brand, as well, said Patti Cohen, executive vice president of global marketing and communications at Donna Karan International, but its blog, NYC Girl About Town, doesn’t give users the ability to comment or offer opinion. It’s intended to serve as a narrative and informative guide — with a voice Cohen describes as “like reading e-mails from a girlfriend” that are “quirky and real” and “lighthearted and fun.”

Not giving consumers the ability to comment might seem contradictory, since it doesn’t permit for the same level of user engagement and open dialogue that brands with editorialized content encourage. But Gail Martin, a social media expert and author of “30 Days to Social Media Success,” said this doesn’t really matter. The level of “objectivity” among editorial content varies, and the messages on some sites are going to be either more controlled or unbiased than others. A savvy Web consumer views any online content in the context of which site is providing it, she said.

“If the provider sells the product that they’re writing about, you’re going to get a less-unbiased look at it than if it’s a third-party site,” she contended.