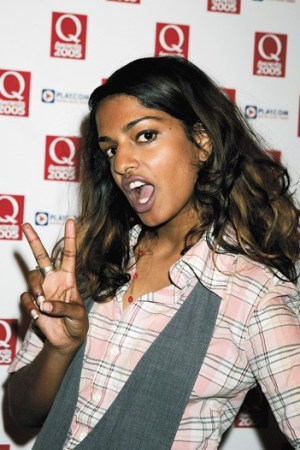 SHIMMER IN THE CITY: Bronzer season is here, and Physicians Formula celebrated that with a New York City-wide event Thursday. Centered around the brand actively live-tweeting and posting updates and photos on Facebook during the course of the day, team members were located at Penn Station, Times Square, the Flatiron district and Herald Square, ambushing lucky passersby with makeup tips, free applications and coupons. A “secret phrase” was revealed exclusively to the brand’s 13,650 Facebook “likes” and 1,600 Twitter followers Thursday morning, and anyone who said “I Wanna Get My Bronze On” to a Shimmer and the City Girl was awarded a $10 Duane Reade gift card for a free bronzer.

@_M_I_A is none too pleased with Lynn Hirschberg’s profile of her in the New York Times Magazine. In an act of Twitter defiance, the outspoken singer provides her over 108,000 person following with the writer’s cell phone number in this tweet (at least she put a winky face at the end): xxx.xxx.xxxx CALL ME IF YOU WANNA TALK TO ME ABOUT THE N Y T TRUTH ISSUE, ill b taking calls all day b****** ;)

@dkny: I wish the wheel of cheese leftover from yesterday’s press day would roll far away… before I do…

Stylist Lori Goldstein is trying to lure people to follow and retweet her @lginstantchic by giving them a chance to win a LOGO by Lori Goldstein Necklace from her QVC line, which ends when she reaches 1,000 followers. She currently has 363, up from 362 this morning.

The always honorable @ElizandJames tweeted: Returning other brands’ awesome samples that were mistakenly returned to EandJ. It’s kind of like returning a stolen wallet. They also set a Twitter goal: If we hit 5000 followers by 3pm tomorrow, we’re giving this Yoshimoto Jacket away. Retail: $995. Get excited. RT!

In step with the opening of their first boutique in New York City, J.Crew posted a behind-the-scenes video of a “wedding paradise in the making.”

Jewelry line Virgins, Saints and Angels Designs posted a Q&A with designer Cheryl Finnegan on their Facebook page, where Finnegan answers questions about what inspired her to start the collection, how she came up with name and what advice she offers to aspiring jewelry designers.

SHOWstudio revealed on their blog Thursday that the In Camera: Lady Gaga live stream, which airs 12:00 pm BST on Sunday (that’s 7:00 a.m. for New Yorkers), is now free of charge and refunds will be granted to anyone who has already paid to view the live broadcast. For those of you who don’t wake up early enough to tune into the live stream, there will be on-demand footage available after the initial broadcast.