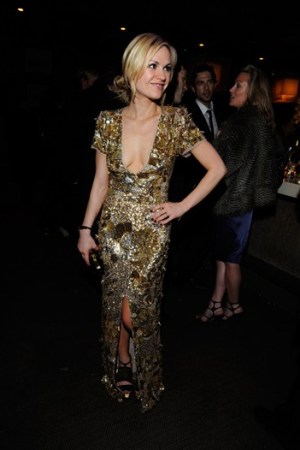 Billy Reid Relaunches: As reported in Social Studies Thursday, designer Billy Reid’s website, billyreid.com, underwent a face lift. “We plan on adding improvements on a daily basis and it has a brand new hybrid category product view to ease the shopping experience,” the designer told WWD, adding that the site is faster and is even compatible with the iPhone. Among the new features expected are Facebook related applications, multiple ways to view products and video. “There will also be some exciting collaborations,” Reid said, emphasizing that the goal of the new site is to be able to take better care of customers and provide an experience similar to if you were to shop in the store. Stay tuned.

@markholcomb: why am i craving a Hi*C Ecto-Cooler from the 80’s!!! might just be Slimer on the box! #discontinued

@francasozzani: I don’t care what people think about Carla Sarkozy. She is just GREAT

@dkny: Phone rings..”Hello may I speak to DONE-AH”? Me: I am sorry who? Caller: DONE-AH Karan? Yeah I am sorry she’s not available- (EVER)

MTV VJ’s…So 2000: MTV is searching for its first ever MTV TJ (read: Twitter Jockey), so if you fancy yourself a “social media superstar,” enter for a chance to land the job (which will pay a whopping 100,000 salary) at tj.mtv.com/open-nomination

Reed Krakoff’s short film, Reed Krakoff Collection 1, debuted on reedkrakoff.com today. The behind-the-scenes video by photographer and filmmaker Steven Sebring is a look at the making of Krakoff’s first collection for the fall 2010 season.