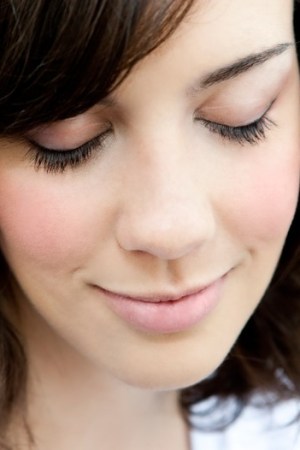 PURPLE LAB TAPS BLOGGERS TO MUG FOR BRAND: Rather than taking the traditional route, color cosmetic brand Purple Lab enlisted eight fashion and beauty bloggers to star in its online lookbook that will launch exclusively on purplelabnyc.com tomorrow. The tech-savvy group is comprised of Beauty Logic Blog’s Mildred Almodovar, Homerun Ballerina’s Audrey Dettmar, Lovely 20’s Virginia Nam, My Style Pill’s Christine Cameron, The Owls Are Not What They Seem’s Joelle Van Dyne and Noel Vallens, The Jet Set Girls’ Anne Fritz, and Where Did U Get That’s Karen Blanchard. The models/bloggers pose for 17 different looks that showcase the brand’s new products – including a blush, primer, and a concealer and highlighter in one – in traditional book format where you can turn the page with the click of a mouse. During the April 17 shoot, Purple Lab staff and the bloggers live tweeted throughout, uploaded backstage photos on Facebook and posted behind-the-scenes videos on Youtube and Twitcam. And apparently the brand is not finished engaging: Purple Lab is hosting a contest on Facebook from June 3 to July 3 for a chance to win beauty products.

TWITTER
Don’t mess with model @alimichael. She tweeted: just ran down, jumped on top of, grabbed, punched and kicked a guy who ran down the street w my phone. He gave it back. I got applause.

It’s off to high school in the fall for Tavi Gevinson, who’s growing up before our eyes. @tavitulle: Today is my last day of middle school.

Style.com’s @MeenalMistry: I kind of love when a publicist forgets to Bcc.

In Twitter giveaways, @ElizandJames will gift a lucky follower one of the first pairs of the new Elizabeth and James sunglasses. The catch: the brand will reveal more details once they hit 6,000 followers (They are currently at 5,577).

Phishing for a Pulitzer: Designer/reality star Whitney Port posted deep thoughts on her blog from last night’s episode of The City: “In terms of Olivia, welllllll, she is just Olivia.”

On Textbook: What Would Holden Caulfield Wear – John Jannuzzi’s blog that imagines what the would-be sartorial tastes of fictional and historical characters might be they had access to ready-to-wear – there’s a post about everyone’s favorite Roald Dahl character, Matilda. Jannuzzi writes, “If Matilda were older, she’d rock that tweed/collegiate/librarian look pretty well,” and includes images of three head-to-toe ensembles:

Off to School: dress by Cynthia Steffe, coat by DKNY, socks and shoes by Marni
Fancy Matilda: Marc Jacobs
Afternoon in the Library: sweatshirt by Marc Jacobs, skirt by Aquilano.Rimondi, shoes and socks by Salvator Ferragamo