The latest social-media updates from the fashion world. 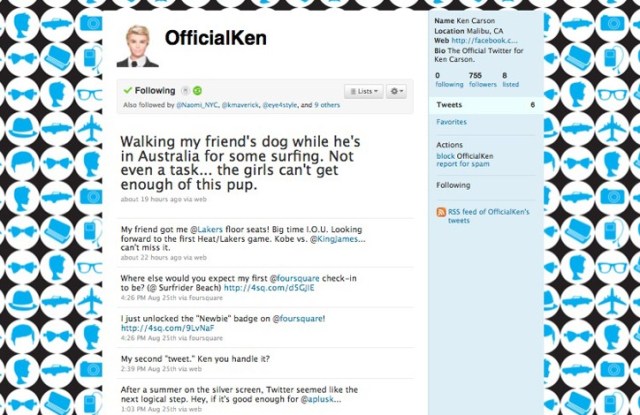 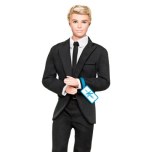 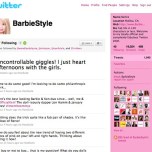 KEN IS SINGLE AND READY TO MINGLE FOR FNO: In news that’s probably none too thrilling to his ex-girlfriend Barbie — who if she were human, would possess dimensions anatomically impossible — the dashing Mattel personality took the plunge and joined Twitter and Facebook Wednesday, proudly proclaiming his single status. And like it always does, the social-media world gave a very warm welcome to its favorite pretend leading man, Ken Carson (and yes, we also thought he was one of those people who went by one name, like Madonna or Cher), as he already boasts 3,356 “likes” on Facebook and 785 on Twitter. According to his tweets and Facebook updates, Ken and his famously side-swept hair (he was rocking this way before Justin Bieber and Zac Efron in his “High School Musical” days) is hot off the “Toy Story 3” promotional tour, about to celebrate his 50th birthday and is gearing up for his Fashion’s Night Out debut September 10. For the duration of the evening, Ken will travel around the city in a truck, and fans can track his every move and follow him via Facebook, Twitter and Foursquare. There’s going to be “real” live Kens (read: really hot model types with blond hair) for fans to take photos with, and the final destination will be a block party in the Meatpacking District. Even the team @DieselUSA has kindly offered to supply Ken with denim for fashion week, but being the single man in New York City that he is, he is keeping his options open. KEN YOU HANDLE IT?!

The latest social-media updates from the fashion world:

@Bergdorfs is about to approach 14,000 followers.

Even the executive director of the CFDA gets nervous at the barber. @stevenkolb: Little boy haircut. So scared in the barber chair. Relax it grows back. #haiku

Who What Wear’s @KatherinePower: My 4 year old friend just told me how to say “red” in Chinese

@heatherettte: Anyone know what Jazz from Fresh Prince is doing now? What an under-sung character…

See some of @OfficialKen’s best tweets below (man, wouldn’t you kill to be the person who manages Ken’s Twitter):

*Walking my friend’s dog while he’s in Australia for some surfing. Not even a task… the girls can’t get enough of this pup.

*its time for your ken twitter update: @officialken: Know I’m new to Twitter, but here’s a pro tip from me to you: change into a suit for your Twitter profile picture. Instant followers, boom.

Tibi is giving its 9,387 “likes” the chance to win two tickets to its spring 2011 runway show September 14, a dress to wear and a tote. Anyone with 20 friends who “like” Tibi are eligible to enter under the brand’s Style tab.

Rebecca Minkoff shared photos from the blogger tea party she hosted Thursday (you can read more about it below).

Ultimate e-tailer Shopbop has taken notice of Social Studies, featuring yours truly as its #FollowFriday Twitter Crush this week. Read the interview at shopbop.com/blog. #sorryfortheshamelessselfpromotion

TEA TIME WITH REBECCA MINKOFF: Rebecca Minkoff, who just announced that she’ll be launching footwear, celebrated her favorite bloggers yesterday with a tea party. This was a first for the designer, an avid blogger herself, and she thought it was important to host a gathering where select writers from the online world could view her handbags and shoes for spring 2011 — live tweeting throughout. Bloggers from whatiwore.com, about.com, fadetoblackny.com and nitrolicious.com (to name a few) sipped on tea and champagne and enjoyed a menu of scones, tea sandwiches and mini cupcakes served on vintage floral China.

VIE LUXE’S UPDATED SITE TO INCLUDE DESIGNER GUEST EDITORS: New York social fixture Marjorie Gubelmann’s online venture, VIE LUXE, recently unveiled an updated Web site that now includes a Guest Editor column and social-media capabilities. Vieluxenyc.com, which has become the online destination for the best in luxurious candles, has grown into a lifestyle for its customers, which Gubelmann cites as the reason she decided to revamp the site. “They wanted to know the backstory and inspiration behind the scents and collections and feel like they’re part of the evolution of the brand,” she told WWD. “We like to think that, like the scents in the collection, the Web site takes you to far-off and exotic locations and creates a dialogue between all of the unique followers of the brand — like Carolina Herrera.” And in what comes as no small coincidence, Herrera also happens to be VIE LUXE’s very first guest editor. You can see the designer’s favorite travel destination, luggage, hotel and Vie Luxe candle at vieluxenyc.com/guest-editor.