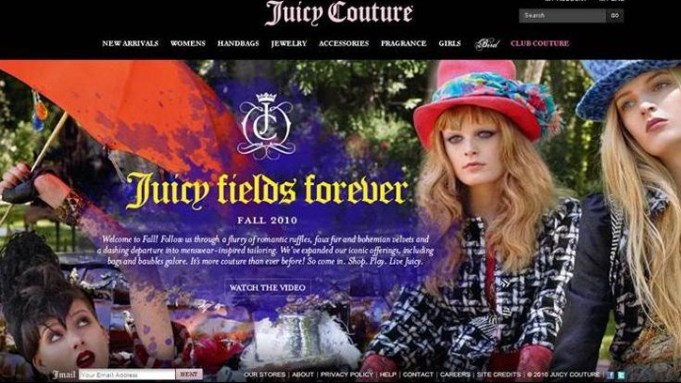 JUICYCOUTURE.COM GETS JUICIER: Those velour sweatpants with “Juicy” splashed across the rear are a distant memory, as the brand once known for its matching tracksuits has diversified, catering to a wider and more tech-savvy audience with its new Web site. While tweens can still have their fix of canvas “Smells Like Couture” high-top sneakers, the revamped juicycouture.com provides users with targeted recommendations derived from browsing patterns; 30 percent more product (styles and sizes), and an expanded Club Couture section, a members-only online community that enables visitors to interact with the brand. Comprised of user-generated and branded content, Club Couture places an emphasis on social media and consumer engagement, as My Juicy Pix and Create a Look allows members to submit photos of themselves wearing Juicy or act as a stylist and put looks together in a virtual dressing room. There’s also a press section that highlights celebrities wearing the brand and fashion blog The Daily Couturist (which launched in May). “The new site features live feeds and interactive features from our social media channels, including Facebook, Twitter and our blog. These live feeds can be found throughout the site and feature the latest posts from our fans, followers and bloggers,” Devon Pike, senior vice president of Juicy Digital told WWD. “Social media and the ways our customers engage with the brand online are very important to us.”

Charlotte Russe’s Twitter contest gives contestants a chance to win a tote bag stuffed with outfits from the brand’s fall collection. All you have to do is follow @charlotterusse and tweet a photo of yourself wearing a look from the brand with the hashtag #charlotterusse. Get your friends to view and re-tweet your picture and the five photos with the most views win. The contest takes place until Sept. 27.

TJ Maxx launched its Maxxinista Magazine content last week, including Trend of the Week videos, a fashion tips photo gallery and a fall accessories message selector where users can share their favorite products. Fashion editor Zoe Glassner (who also happens to star in one of those impossible-to-miss Let Us Make a Maxxinista Out of You commercials) will host the weekly video series, highlighting a different fall fashion trend each week. Fans then have the ability to upload photos or a story (or both) pertaining to that week’s trend for the chance to win $500. Five winners will be named each week: one $500 grand prize and four $100 prizes. The brand, which has worked closely with Buddy Media on revamping their Facebook presence, went from 30,000 “likes” in February to 176,129 — a 600% increase in just seven months.

JNBY KICKS OFF VLOGGER SERIES: The first video, shot at the brand’s New York City flagship on Greene Street, will star Shopbop’s fashion director Kate Ciepluch and style director Morgan Wendelborn. In a push to raise brand awareness stateside for Chinese-based JNBY, the two will showcase their favorite pieces from the fall collection and offer styling tips. The series kicks off Wednesday on jnbynyc.com, shopbop.com, both outlets’ Twitter and Facebook pages and Shopbop’s YouTube channel.

Bargain shopping addicts can now access the entire Bluefly collection on their iPhones, as the brand unveiled its first iPhone application today. Users can search product by brand, color, size and category, and there’s a Best of Bluefly section showcasing the in-house stylists’ fashion must-haves.

V Magazine partnered with Marc Jacobs on its first iPad application that launched last week. The magazine’s New York issue features the designer and Lady Gaga on the cover, shot by the legendary Mario Testino (there’s also exclusive video footage from the shoot and selected works from the photographer). Users can also peruse through Marc Jacobs’ branded content, including ad campaigns shot by Juergen Teller for the Marc Jacobs and Marc by Marc Jacobs lines, test their pop culture knowledge à la Trivial Pursuit and customize a magazine cover (and then share it on Facebook, obviously).

QR Codes are picking up steam, as a slew of jewelry companies and Urban Decay are utilizing the technology to engage customers and drive sales (and if you’re not familiar, they’re two-dimensional barcodes that can be read by mobile and smart phones). Platinum Guild International, Michael C. Fina and A. Jaffe were among the first in their industry to unveil store windows with embedded QR Codes, and Urban Decay pioneered the technology at Sephora. Displayed beside product, shoppers with smart phones can use the QR codes to access how-to advice, application tips and behind-the-scenes footage, according to founder Wende Zomnir. “We have such a strong connection with our customers through Twitter, Facebook and all kinds of social and electronic media. This is just another way I get to make a personal connection with them,” the beauty guru told WWD. Urban Decay has 70,889 Facebook “likes” and 27,600 followers.