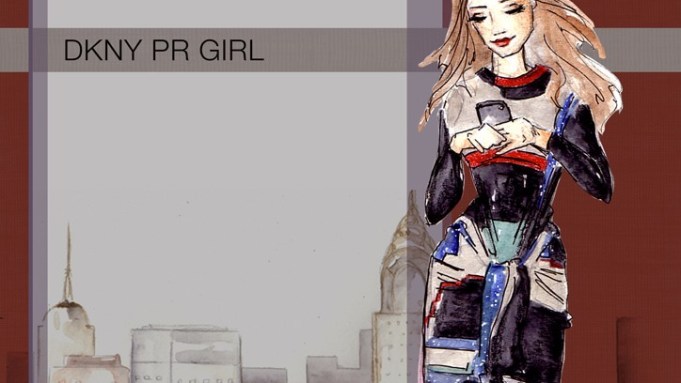 COCODOT AND DKNYPRGIRL’S FASHIONABLE GREETINGS: Following its first designer collaboration with Lilly Pulitzer, online greeting company Cocodot has partnered with DKNY’s Twitter alter ego, DKNYPRGirl (she uses the handle @dkny), on an exclusive collection of cards and invitations. Beginning September 9, Cocodot users, DKNY fans and DKNYPRGirl Twitter followers (currently at 169,760) can send fashionable e-cards based on the brand’s fall 2010 collection, “New York Art + Soul.” Partnering with DKNY and the brand’s social media voice in particular was no accident, as Cocodot envisioned this collection with public pr girls in mind and wanted to create something that was easy, stylish and allowed for fast communication. “DKNY is not just about clothes, it’s about a lifestyle. Cocodot is a chic and easy way to correspond. It makes you want to stay in touch, and if you’re going to do that, you may as well do it in style,” DKNYPRGirl told WWD. “If you like to be social and you value time, then this collection is for you. Didn’t you hear? Snail mail is so last season.” Prices are 99 cents per card, $19 per event or $49 for an unlimited year membership. Follow DKNY on Twitter @dkny and cocodot.com @cocodot.

Jess_Stam: 2:15 on the first day back at work, FNO show, heal broke in rehearsal. Thank goodness for these new Givenchy’s I had time to pick up :)

Milly understands that only so many can attend their Fashion’s Night Out activities at Bloomingdales and Bergdorf Goodman – which is why they created an FNO Pop-Up Tab on its Facebook page. Including all 7,894 “likes,” the brand’s offering an exclusive Milly dress and FNO tees and tanks.

CLAIRE’S GIRL TALK: The accessory mega-chain will unveil its new Web site this week with an emphasis on social media and engaging its teen and tween consumers with user generated content. Among the new features is a monthly blogger series where three real-life teens will write about fashion, pop culture, celebrity gossip, music and anything else that might be relevant to the claires.com user. The selected bloggers will also have the option of uploading personal photos and videos to connect with other users, and online visitors are encouraged to share posts, comment, ask questions and even apply to become a future blogger. There will also be a live-feed component called “The Buzz” that directly connects users to Facebook and Twitter. Redesigned in conjunction with Chandelier Creative, a New York City-based creative agency, Claire’s is now entirely digital. For example, instead of consumers carrying “membership cards” around that allow them to receive complimentary products, shoppers will now be able to track how much they interact with brand online by commenting, posting and tweeting @clairesstores. “The new claires.com will provide a fabulous opportunity to deepen our relationships with existing customers, connect with new consumers, and generate a tremendous amount of enthusiasm for the brand by providing a fun and engaging destination. We believe this innovative, interactive approach will resonate with each of our target customer groups, but with a particular focus on teens,” chief executive officer Gene Kahn told WWD.

Sisters Danielle and Jodie Snyder of Dannijo introduced a capsule collection of handbags and iPhone cases Tuesday on dannijo.com, Henri Bendel and Shopbop. All three styles are handmade in Morocco, including a hobo, a backpack and a laptop case, and they retail for $370 each. Limited edition iPad cases are also available at Henri Bendel, as the brand has a window in the retailer for the duration of fashion week. And starting today, the design duo announced they’ll be launching a contest where two winners (one from Twitter and one from Facebook) will each receive a Dannijo iPad or iPod case (winner’s choice). Tweet a photo of your favorite way to wear the brand @DANNIJO or upload it on to Dannijo’s Facebook page for a chance to win.

Yves Saint Laurent has partnered with Polyvore for Fashion’s Night Out. The brand will be providing Polyvore with a data feed of its accessories and products from the Edition 24 collection and online visitors can explore and design fashion sets on polyvore.com. Members of the Polyvore team will be present at YSL’s FNO festivities at its 57th Street store in New York City offering live demonstrations on computers. The two also announced a challenge this week at polyvore.com, and the best entry will win a YSL Multy bag from the fall collection.

Rag & Bone and Reed Krakoff launched e-commerce Tuesday. Take a peek at the online shops at rag-bone.com and reedkrakoff.com.

A first for the designer, Narciso Rodriguez will be live-streaming his spring 2011 show on firstcomesfashion.com.

Jil Sander Navy tapped blogger and photographer Garance Doré to co-host its Fashion’s Night Out event at its flagship stores in Soho and on Madison Avenue.