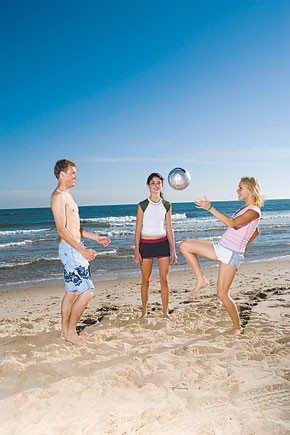 What cities are the most active in the land? Fort Worth-based research firm Buxton has developed an Active Sportswear Spending Index to figure out just that by measuring how much various metropolitan areas spend on women’s activewear. An index of 100 indicates the national average, which, according to Buxton, is nearly $9 million for each area. Active sportswear consists of clothes designed for recreation (sports included) or casualwear; it does not include dress, outerwear, accessories or underwear. “This whole category is booming,” said Rich Hollander, president of Buxton’s CustomerID division. “Sports apparel manufacturers like Nike, Adidas and newer names, such as Lululemon and Lucy Activewear, are making aggressive moves with their own retail store expansion.” Not surprisingly, three regions of Southern California crack the top 10 among metro areas with populations over 1 million, thanks to sunny skies, endless recreational opportunities and the pressure to look good all year long.

2. WASHINGTON, D.C.-MD.-VA.-W.V.
Index: 167.4
The nation’s capital always seems to be on the run — literally and figuratively — so perhaps it shouldn’t be a surprise that residents snap up plenty of activewear. Patagonia has a store downtown on Wisconsin Avenue, while at the Reston Town Center in the Virginia suburbs, retailers such as Eddie Bauer and Potomac River Running can be found. And should one venture just a few miles away into Silver Spring, Md., plenty of specialty retailers abound: Sports World features apparel brands such as Adidas, Nike, Reebok and Wilson, while Les Gals Activewear carries athletic and dance apparel from brands like Avia, Danskin and Capezio. Other nearby stores include Aspen Hill Sport Shop and Sports Town.

3. NASSAU-SUFFOLK, N.Y.
Index: 166.7
Located to the east of New York City, Long Island boasts some of the priciest real estate and most exclusive golf clubs in the country. For activewear, shoppers can check out Khanh’s Sports, located in East Hampton, which features outdoor-inspired athleticwear. For footwear, try Gubbins Running Ahead in Southampton, where residents engage in sports such as hiking, biking, kayaking, boating, golf and tennis. Located a bit closer to Manhattan is Garden City’s Roosevelt Field, a mall consisting of more than 270 specialty stores, where shoppers can find activewear at Dick’s Sporting Goods, Timberland and Modell’s Sporting Goods.

4. CHICAGO
Index: 146.3
Though this year’s Chicago Marathon was cut short due to intense heat conditions, that didn’t stop more than 18,000 Illinois residents (mainly from the Chicago area) from participating in the event. “Chicago is hot right now, especially with the number of Adidas and Nike locations that have opened up there,” said Buxton’s Hollander. Along North Michigan Avenue, one of the most expensive streets in the U.S., sportswear shops such as Vancouver, Lululemon, Eddie Bauer and Bebe Sport can be found. Out in the suburbs of Evanston near Northwestern University, residents and students can try Active Endeavors, Let’s Tailgate and Locker Room of Evanston for athletic apparel.

5. BOSTON, MASS.-N.H.
Index: 144.0
Sure, this is a town that prides itself on professional sports, but colleges such as Boston U., Harvard, Northeastern and Boston College draw in students who spend plenty of money on activewear — even if they’re wearing it just to lounge around. Sea Boston USA and Boston Campus Gear, located in historic Faneuil Hall Marketplace, offer collegiate wear and accessories from universities within the area. Out of Left Field features Red Sox, Patriots, Celtics and Bruins gifts and apparel. And along Newbury Street, one of the most prominent shopping districts in the region, stores such as Patagonia carry plenty of casual sportswear. Where do residents go for exercise? Along the Charles River — both sides feature paths that extend roughly 12 miles.

6. LOS ANGELES-LONG BEACH
Index: 142.7
This is L.A., so, naturally, activewear brands target the region. For example, shops found along the 200 to 400 North blocks of Beverly Drive include Lululemon, The North Face, Bebe Sport and Bobby Jones golfwear. Bordered by the UCLA campus to the north and Wilshire Boulevard to the south is Westwood Village, a five-block square retail village. The complex features Copeland Sports, Birkenstock and Westwood Sporting Goods Company. Even the famed Rodeo Drive in Beverly Hills carries activewear — but not much: The best option is Niketown, located at Wilshire Boulevard and Rodeo Drive.

7. SEATTLE-BELLEVUE-EVERETT, WASH.
Index: 139.4
Where else could Patrick Dempsey’s “Grey’s Anatomy” character, Dr. McDreamy, have purchased 40 acres of land to get in touch with wilderness? Though it may have a reputation for being a cloudy, rainy city, the Seattle area is one of the most outdoorsy in the country. “If you look at the lifestyle of these top cities, I’d say Seattle and Minneapolis really are two of the most active,” said Hollander of Buxton. Several casual sportswear apparel companies call the city home, including REI, Cutter & Buck and Unionbay, the denim and sportswear company. Located 13 miles from Seattle is the Microsoft corporate campus in Redmond, Wash., which, in addition to breeding its own generation of millionaires who can be active if they want to, also offers employees plenty of recreational activities.

8. MINNEAPOLIS-ST. PAUL, MINN.-WISC.
Index: 137.5
More people are bicycling in Minneapolis than almost anywhere else; the city has been named the number-two bicycling city in the country by the U.S. Census Bureau. Additionally, more than two dozen projects are in the works that will provide new trails, lanes and other improvements for cyclists and pedestrians. Residents can get also get a serious workout by simply walking the Mall of America, a 4.2 million-square-foot complex located in nearby Bloomington that houses activewear retailers such as Champs Sports, Foot Locker and Sports Authority. Aerie f.i.t., the fitness brand created by American Eagle, is one of the newest entrants to the mall.

9. SAN DIEGO
Index: 134.5
Boasting 70 miles of beaches and a year-round warm climate, California’s second-largest city offers plenty of outdoor destinations, including Balboa Park, Mission Bay Park and Mission Trails Regional Park (which has nearly 5,800 acres of both natural and developed recreational areas for hiking and overnight camping). Outlet centers are abundant in this town, many of which feature an assortment of sports shops. The Viejas Casino and Outlet Center, for example, houses Vans and Reebok. And located on Camino de la Plaza is Las Americas Premium Outlets, where a number of stores carrying activewear can be found, including Adidas, Nautica, Converse, Nike Factory Store and Puma.

10. DALLAS
Index: 130.5
Ever hear of the Dallas Cowboys? Or the Dallas Mavericks? Or the Dallas Stars? Yes, sports like football, basketball and hockey are a huge deal around here — teams from every major sport call Dallas home, as do college teams from Southern Methodist U., Texas Christian U. and UT-Arlington, to name a few. Specialty stores such as Lucy Activewear, D&J Sports and Rockhard Threadz have locations here. And larger outfits, such as Steve & Barry’s and REI, can be found in Dallas as well.