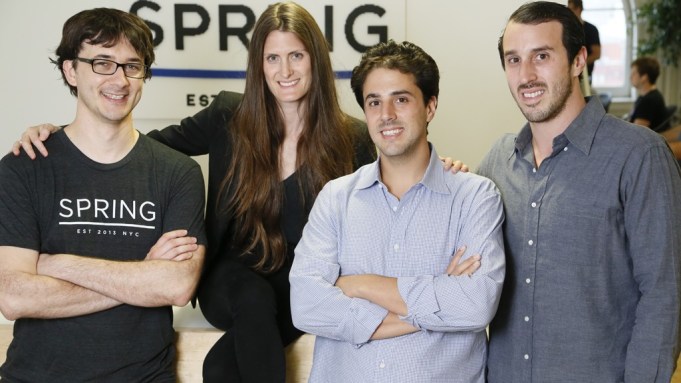 Spring is coming late this year — but with a bang.

The new app, which is being backed by fashion heavy hitters from Bernard Arnault to Lew Frankfort to Silas Chou, will launch today to take mobile shopping head on and with a social element.

Spring is a mobile-only marketplace that allows users to shop directly from a community of brands. It goes live on the Apple App Store and will carry products from a broad range of brands, from Everlane to Theory and Carolina Herrera. Consumers will be able to follow designers and brands and buy from their feeds with a swipe of their finger. For now, Spring is only available for iPhone users, with iPad and Android versions coming soon.

So far, 450 brands have signed on to work with the app and 150 will have up-and-running stores on it upon launch. Alice + Olivia, Andrew Marc, Del Toro, Edie Parker, Helmut Lang, Jason Wu, Jennifer Fisher, Nicole Miller, Pierre Hardy, Rebecca Minkoff, Thakoon and Warby Parker are among those that will be open for business today, with Alexander Wang, Dannijo, Derek Lam, Levi’s, Marchesa, Prabal Gurung, Rag & Bone, Suno and Vince coming soon. The hush-hush project was referred to internally by the pseudonym Jello Labs for a few months.

“We put the relationships between brands and customers first, instead of all [other] social networks that start off as user to user, [where] brands were an afterthought,” said David Tisch, cofounder and chairman of the board, whose own venture fund Box Group invested in Spring.

Tisch described Spring’s approach as “taking the best of” the existing social and commerce experiences out there to create the new platform. Unlike Facebook, which at launch put user-to-user social communication first and commerce second, Spring’s primary focus is commerce and brand-to-user communication.

Tisch contends that Spring is different because it connects customers with brands and still has many of the aspects of a social network.

Alan Tisch is clear that Spring is about shopping and connecting directly with brands and is not a social platform. He compared the experience to shopping on Fifth Avenue or SoHo — except on a mobile device.

“We wanted to make it the easiest place to sell,” Alan Tisch said of Spring, which earns its revenues by taking a small transaction fee from brands for every item sold. “We built a business model to incentivize brands to give the best customer experience.”

Case in point: Spring will cut 50 percent off its transaction fee when a brand offers free shipping, and give an even lower transaction fee than that for any product launched exclusively on the platform.

Katz, who was part of the founding team at BeachMint, said brands control the experience on the app, posting their own pictures.

“It’s about the purity of shopping,” she said.

The hope is that Spring becomes a place where the user base is expressly coming to transact — which is why so many designers have already signed up to sell on the platform.

Stacey Bendet, founder and creative director of Alice + Olivia, said she was begging Instagram to add a feature that enabled users to shop because she would publish things and see an instant response where followers wanted to buy items in her posts. She said Instagram is still integral to Alice + Olivia from a sharing and branding perspective, but that Spring is the first true example she’s seen of social commerce.

Jennifer Fisher, the CFDA Award-nominated jewelry designer with a cult social media following, agreed. She said converting fans to shoppers has been difficult on Instagram, where she has 122,000 followers and finds that consumers want to buy the product right away and “it’s too clunky to redirect them to my site.

“I have a direct-to-consumer model already, I’ve always done it that way,” Fisher said. “Hopefully it’s an extension of my Web site and making my Instagram shoppable. I hope that the following will be the same.”

The designer said it’s going to take some time getting used to posting to two outlets since she manages all of her own social media. She doesn’t want to take a “cookie-cutter” approach to content across the two platforms and will launch exclusive silver pieces with Spring. A sterling silver VIP cuff will retail for $445 and she will sell her mini word cuffs in silver for $260.

“I don’t want to cannibalize my sales,” she said “[I want to] focus on selling collaborative items.”

Tekstar Hodge noted that unlike a typical online or mobile retailer, Spring doesn’t hold inventory or have a physical presence. However, it will maintain an active social media presence across platforms like Instagram, Pinterest and Twitter (like most retailers today) —rather than competing with them in the space.

“Instead, our focus is to promote brands and the incredible product they post on Spring,” she explained of the app’s strategy as it pertains to social. “Social content will feel like spending time on Spring while being customized to the individual social platform. For example, scrolling through Spring’s Pinterest will communicate that same feeling of going shopping and discovering on Spring.”

Out of the current crop of social platforms, Spring mostly closely resembles Want Need Love, or Wanelo, which was launched in 2011.

Like Spring, Wanelo’s Web site and mobile app facilitate mobile shopping with social features, but there are significant differences. Spring seems to skew towards a more mature audience, while Wanelo is overwhelmingly popular with teens and Millennials. The majority of Wanelo’s content is user generated. On Spring, brands control which products they post on the platform, whether it’s an Instagram shot, a celebrity wearing the item that’s for sale, an editorial or a product shot on a white background. Brands also have the option to post user-generated content.

“That ease of seamless shopping has not been found yet, especially not in mobile. This is it,” said Gruber, cofounder and executive producer of “Project Runway,” and cofounder of Theodora & Callum. For Theodora & Callum, Wanelo has seen less sales traction and more success for users making lists and saving images.

“I abandon carts all the time; I am the king of abandoning carts,” Gruber said. “I just feel like the fun of shopping is drained out of the Internet experience. There’s the thrill of when you find something you love and want to own, and then when you get to the barrier of ‘we need your e-mail’ or ‘how did you find us’ and it’s like, ‘forget it.’ I take Uber all the time because I can click it and they are there.”