With an ever more discriminating pool of advertisers and readers, the time for a polite rivalry has seemingly come to an end. 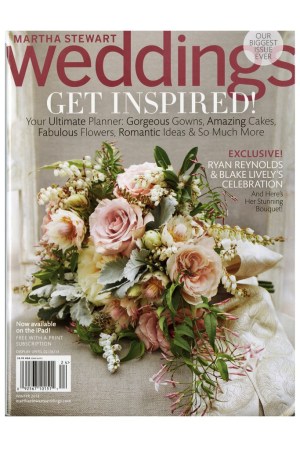 SQUARING OFF IN BRIDAL: The publishers of the two leading bridal magazines were recently assessing the competition, namely, each other.

Here’s Amy Wilkins, publisher of Martha Stewart Weddings, on Brides: “Brides is.…It’s very hard to know who they are today because they’ve changed quite a bit. They’ve changed five times in the time I’ve been here. Martha is a very consistent, focused product.”

Brides publisher Michelle Myers: “We come from a company whose heritage is style. If you look at the notable photographers we use, you’ll see they also shoot for Vogue and Vanity Fair. If you look at the latest issue of Martha, all that’s featured is food and table settings.”

The two had just sent out their winter issues, Brides’ first since it went bimonthly, and wanted to broadcast some victories in their ongoing bridal battles.

The magazines have been competitors for years, but with an ever more discriminating pool of advertisers and readers, the time for a polite rivalry has seemingly come to an end. In the insular world of bridalwear, businesses are stingy with their ad dollars, and there’s not enough of them to go around — there are also more competitors to contend with, like biannuals Town & Country Weddings and New York magazine’s Weddings.

So in the last year, there was more urgency in the wedding racket as the two category leaders sized each other up, played catch-up and exploited weaknesses.

Brides was first out of the gate at the start of last year. With a new publisher in Myers, who’d joined from Lucky, and a new editor in chief, Anne Fulenwider, a former Condé Nast alum who’d defected from Hearst Corp.’s Marie Claire, the magazine had been weakened by its monthly frequency, a move that was engineered two years earlier by then-publisher Bill Wackermann. Bridal marketers like their magazines on newsstands for several months at a time, and the monthly schedule backfired in a loss of advertisers. A redesign in May didn’t help — in the first half of the year, Brides shed 11 percent of its ad pages, according to Media Industry Newsletter.

To turn things around, Myers said she argued for a bimonthly schedule to her boss, Condé Nast chief executive officer Charles Townsend, who eventually adopted the change in August. “I felt it was the right business decision,” Myers said. “We are an industry that really gravitates toward six times a year.”

In the months since, Brides has left little to chance in its bid to be competitive. As if to remind readers of its pedigree, the magazine enlarged the size of a cover line that was barely legible during Fulenwider’s tenure: “From the publisher of Vogue & Glamour.” Keija Minor was promoted from within to be the new editor in chief; she is the first African-American to lead a Condé Nast magazine. It’s also gone after a Martha signature, promising in its winter issue a guide to “gorgeous DIY hairstyles.”

Over at Martha’s West Chelsea headquarters, Wilkins was tasked with a magazine that outsold Brides at the newsstand — an average of 155,000 to 65,000 through the first half of the year, according to the Alliance for Audited Media, formerly the Audit Bureau of Circulations — but that was still bested in subscriptions — 252,000 to 189,000. As a result, Brides’ circulation is still much larger. Newsstand for both has fallen over the last five years.

Wilkins believed the changes at Brides spelled opportunity — “It’s a sign of weakness when you have to tell people you’re related to Glamour,” she said of the enlarged coverline — and has made a play for its turf.

In 2012, she increased the magazine’s frequency from four to six times a year, including two stand-alone special issues, each with a 350,000 newsstand run. The spring “real weddings” stand-alone was such a success, Wilkins said, this year it’s doing two. Martha, edited by Elizabeth Graves, also picked up at least one reliable Condé trademark, the celebrity exclusive, boasting in its winter issue pictures of Ryan Reynolds and Blake Lively’s wedding.

For the past two years, with Brides as a monthly, the two magazines couldn’t compete head-to-head. The winter issue is the first time they can be compared directly: Brides clocks in at 384 ad pages and Martha with 328, its biggest issue ever, according to the cover. For spring, Martha will be reporting 304 pages; Brides expects 30 pages or so more, but the issue won’t close officially until late January.

Said Wilkins of the discrepancy in paging: “We’re definitely speaking to a more affluent audience.” The rate card cost of a full-page ad in Martha starts out at $43,000; Brides at $94,000.

For Myers, the ad turnout vindicated the new schedule at Brides and lets her turn the page after a difficult year.

“Given the size of winter, it was clearly the right decision. As you can see, advertisers are loving it,” she said. She coaxed several advertisers to return after four years away and scored some big new companies, including Unilever.

Meanwhile, Wilkins can lay claim to being the one upward-trending asset in the beleaguered home entertainment and media empire of Martha Stewart Living Omnimedia, which had a dismal year on the magazine front, closing Everyday Food and Whole Living, and shedding nearly 30 percent of ad pages at its flagship magazine.

“It’s great to be a bright spot for the company,” Wilkins said.