Star Power at White House Correspondents Dinner… On the Ball… 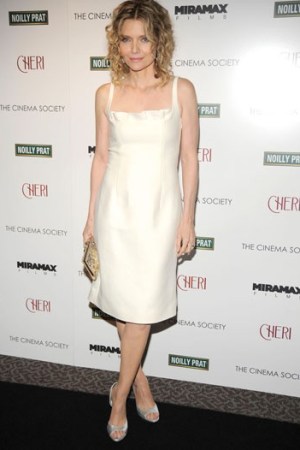 STAR POWER: So Hollywood and the press haven’t lost their love affair with the Obama administration, at least judging by the guest list for the upcoming White House Correspondents Association dinner on May 1. It’s all about Hollywood couples at this year’s event, where Glamour’s Cindi Leive will break bread with Jessica Alba and husband Cash Warren, who will be seated next to Jason Wu, no stranger to the White House, thanks to First Lady Michelle Obama. Time magazine has invited Steven Spielberg and Kate Capshaw and Michelle Pfeiffer and David E. Kelley, and Vanity Fair’s table will have Tom and Kathy Freston, John and Elaine Mellencamp, film producer Jerry Weintraub, songwriter T. Bone Burnett of “Crazy Heart” fame and “Thelma and Louise” screenwriter Callie Khouri and Vernon and Ann Jordan. But its guests aren’t only from the entertainment world: The magazine also scored Google chief executive officer Eric Schmidt. And considering his new movie “Wall Street: Money Never Sleeps” is on its way to theaters, it makes sense Michael Douglas would be seated at Fortune’s table, with banking analyst Meredith Whitney, who presumably won’t be asking Douglas to repeat “Greed is good” over and over.

This story first appeared in the April 13, 2010 issue of WWD. Subscribe Today.

ON THE BALL: Dolce & Gabbana has long loved sports, so it perhaps was only natural the brand tapped five top Italian soccer players to front its new underwear advertising campaign, just in time for the 2010 World Cup to be held in South Africa this summer. Images of the sculpted bodies of Antonio Di Natale, Vincenzo Iaquinta, Claudio Marchisio, Federico Marchetti and Domenico Criscito, photographed by Mariano Vivanco in a locker room, are set to bow this week. Vivanco has collaborated with Domenico Dolce and Stefano Gabbana on other sports-related projects such as the book “Calcio” (“Football”) in 2003 and a calendar with A.C. Milan soccer players in 2008.

Part of the Dolce & Gabbana Gym & Underwear collection is dedicated to the World Cup, with a color palette ranging from blue and light blue to optical white, which represent the Italian national team. The country’s flag is featured on each piece, from tracksuits and short jackets to polos, vests, shorts, sweats, T-shirts and trousers. Italy’s flag and elastic bearing the words “Calcio” and “Italia” are recurring themes on the underwear collection in white, black and gray. The pieces will be available in Dolce & Gabbana boutiques as of mid-May. — Luisa Zargani

NO DISCOUNT ON HELMUT: At the stroke of noon today, Gilt Groupe will offer an unusual sale: The current collection from Helmut Lang at full price.

Gilt members who spend $250 or more will receive a special perk, however: An exclusive Helmut Lang tank and a Gilt credit of $50.

About 20 pieces from the spring group will be featured, including leggings. Typical prices will be about $300, starting at $90 for a jersey tank and going up to $780 for a leather jacket. Unlike most of Gilt’s two-day flash sales, the shop will be up for one week.

“We worked very closely with the Helmut designers to pick what we thought our members would respond to best,” said Rao. “We wanted to show quintessential Helmut, refined and simple and downtown chic.” Some of the items are not yet available in other stores.

Past collaborations with the likes of Lucky and Vogue have featured full-price merchandise at about the same price point, and the retailer has also sold hard-to-find consumer electronics at full price.

Other full-price collaborations are coming up, such as a sale with Leigh & Luca next month. Known for their scarves, the company is launching a handbag line, and the Gilt sale will present those as well as exclusive styles for $165.

However, don’t expect Gilt to turn into an online Bergdorf Goodman anytime soon. “We don’t want to be another place to go and buy full-price product,” said Rao. “If it’s something special, perhaps something developed especially for us,

“Brands approach us because they’re looking at us more as a platform to [market] their brand,” she said. — Cate T. Corcoran