The campaign features Devon and Leah Sill and Eric Decker. 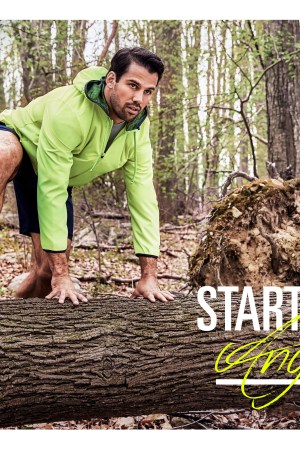 Starter is taking its message to the mass market.

The sports brand owned by Iconix Brand Group on Wednesday will unveil its first marketing campaign in more than five years for the activewear line that is sold at Wal-Mart. The last campaign was in 2010 and featured quarterback Tony Romo.

Starter once again turned to football players for its latest iteration, with the New York Jets Eric Decker and the Houston Texans’ Devon Sill serving as faces of the brand.

But the images in the “Starting Is….” campaign do not emphasize the football connection and instead focus on fitness and health. The dots are filled in with motivational words such as “triumphant,” “small steps,” “brave” and “anywhere.”

“We thought they’d be perfect for this campaign,” said Bill Hackett, senior vice president of Iconix’s Sports Division. “We want to embrace everyone from the marathon runner to the person looking for motivation to walk around the block.”

Sill is pictured with his daughter Leah, six, who was diagnosed with stage 4 neuroblastoma in 2014 and given a 50-50 chance to live. She recently went into remission, won an ESPY award for her courage and helped raise more than $1 million for cancer research. In September 2014, the Cincinnati Bengals kept Sill on the practice squad so he could retain health benefits to pay for his daughter’s treatment.

“When you think of the story of Leah and how he fought for her cause, it’s a great connection back to the brand,” Hackett said.

Decker was raised in a small Midwestern town and connects well with the Wal-Mart consumer, Hackett said. “It’s less about him being a New York Jet and more about him being an athlete. He’s a good-looking guy from a small town and half of the Starter shoppers at Wal-Mart are women.”

The men’s and boys’ merchandise is targeted to men between 25 and 64 and boys under the age of 13 and is Wal-Mart’s opening price activewear label, Hackett said.

The campaign will be promoted on social media because the vast majority of Wal-Mart shoppers use mobile devices. Digital and print advertising will also be part of the plan, Hackett said.

Both athletes will complete blog posts for the Starter web site, which is being relaunched with this campaign. There will also be fitness tips to help people get started on their fitness journey.