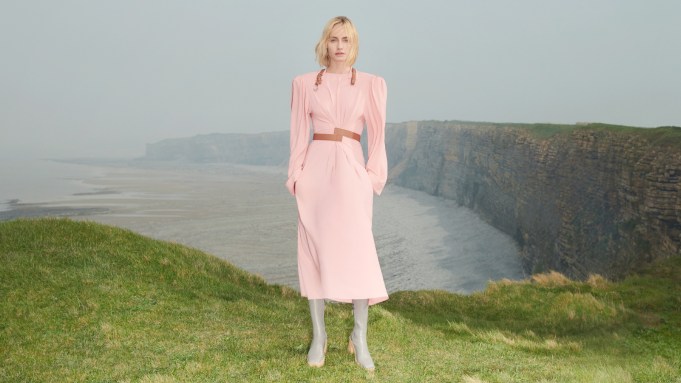 LONDON — Stella McCartney is calling on consumers to protect the planet with her fall 2019 campaign. It’s as much of a fashion statement as it is a political one with individuals such as Amber Valletta, members of the climate activist group Extinction Rebellion and primatologist and chimpanzee expert Jane Goodall taking part.

Shot by the British photographer Johnny Dufort, it features Valletta on the Welsh coast. Dressed in a pale pink dress and a faux fur coat, she’s pictured standing on lush green grass. It acts as a stark contrast to another image where she’s seen wearing a multicolored fringe dress and lying on top of a globe on a rocky gray shoreline.

A short film, set to be released in September, accompanies the images. Also shot by Dufort, the video is narrated by Goodall, who also recites a poem penned by author Jonathan Safran Foer.

Best known for his novel, “Extremely Loud & Incredibly Close,” Safran Foer’s poem for McCartney includes statements that encourage consumers to think about their impact on the planet. One phrase says: “Here is where we have our long moment, where we cannot help but leave things differently than how we found them, and have the choice to leave things better.”

Safran Foer also collaborated with McCartney on her men’s spring 2020 and women’s resort collection. It features phrases and slogans written in his own handwriting and a chunky knit with the words “We Are the Weather,” which is also the title of Safran Foer’s upcoming book.

The campaign, which breaks on July 23, will be supported by a social media initiative. A video series, “How to Save the World,” will feature across the brand’s accounts as a means to share information on the climate crisis.

McCartney’s label has long been rooted in sustainability since its launch in 2001. More than 60 percent of her collections are made from sustainable materials. She will continue to push that sustainability message as her company joins the LVMH stable and she becomes a special advisor to LVMH chairman and chief executive officer Bernard Arnault.