Stella McCartney has put an old pal at the center of her spring ad campaign: her family's pet dalmation. 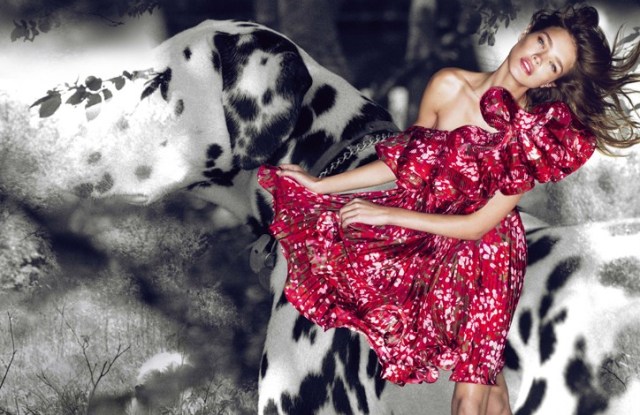 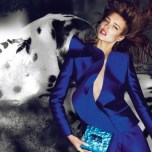 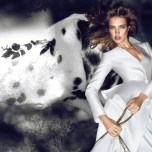 STELLA’S SPOTS: Stella McCartney has put an old pal at the center of her spring ad campaign: Lucky, the pet dalmatian her family had when she was growing up. The black-and-white image of Lucky — shot by Linda McCartney in 1976 — serves as the backdrop to the ads, which feature Natalia Vodianova. The campaign, shot by Mert Alas and Marcus Piggott, was styled by McCartney and the art direction was done in house.

“I love the way it’s very graphic and soft at the same time, due to its double exposure,” said McCartney of her mother’s photo, which is entitled “Lucky, Sussex, 1976.” As for her choice of Mert and Marcus, McCartney told WWD: “I have known Marcus since I was a teenager and Mert from when they first met, but we never had the chance to work together. I wanted to capture their high-glamour approach over my mum’s low-maintenance way of working.”

This story first appeared in the February 2, 2010 issue of WWD. Subscribe Today.

She said the campaign images are “fashion meets reportage, mixing color, and black-and-white. A family animal with an outside atmosphere meets studio lights, camera, action! Opposites meeting in one image, illustrating the masculine and feminine sides of the Stella McCartney brand,” she said.

The ads will break in the March issues in the British, French and Italian editions of Vogue as well as in V and Pop. — Samantha Conti

THROWING A WIDER NET: With less than two weeks to go until the Marc Jacobs show, company president Robert Duffy has taken to Twitter to ask for staging suggestions. On Monday, he tweeted: “Any ideas for a stage set for our fashion show? It’s at the armory on 27th Street. I’m stuck. No idea. Something minimal please? I have one week!” Still, Duffy seems to be taking it all in stride — telling WWD that last season’s fashion show wasn’t nailed down until three days before it took place.

Duffy joined the microblogging site on Friday and a few days into it, he’s not sure how long he’ll last. “Marc says hi! He loves that I’m doing this. He thinks I’ll be bored in two days. Let’s see.” One of the reasons he signed up for Twitter was to prepare for the upcoming launch of a Marc Jacobs e-commerce site, set for August. Meanwhile, Duffy revealed a few non-Twitter-related tidbits to WWD, including plans to debut a lingerie line in spring 2011. — Amy Wicks

CHANGES AT GUCCI: Following the resignation in mid-December of Mimma Viglezio, executive vice president of global communications, it looks like the structure of Gucci Group’s London headquarters is being slightly modified.

Besides the fact that Viglezio, who set up the division in 2005, won’t be replaced, sources said six people from her team were let go following the closure of the corporate image division. Its functions were decentralized to the various brands.

“Since the corporate image division was set up, the smaller brands such as Alexander McQueen and Stella McCartney have grown significantly and have specific, independent needs, so the idea of group [image] communication wasn’t timely anymore,” said a source. “The new configuration better reflects the business model of today.”

Meanwhile, sources said the media planning and buying divisions are undergoing a reorganization but no further significant changes are planned at the group at this stage. Both the financial and human resources divisions will remain in London and the latter will control the social responsibility department. — Alessandra Ilari

GIMME SHELTER: Does Hearst want to expand in the beleaguered shelter category? As first reported on New York Magazine’s Daily Intel blog, Hearst Magazines president Cathie Black is said to be exploring the launch of a new home title, likely in partnership with HGTV, the home-lifestyle cable channel founded by Scripps Networks in 1994. If it comes to fruition, an HGTV-branded magazine would represent the second collaboration between Hearst and Scripps Networks, which also owns the Food Network and partnered on the Hearst-published Food Network Magazine, which debuted as a newsstand-only test issue in October 2008 before launching in May 2009.

Regarding the rumor, a Hearst Magazines spokeswoman said, “We always have ideas in development, but there is nothing official to report at this time. Right now, we’re focused on our most recent launch, Food Network Magazine, which was an immediate hit with readers and advertisers, tripling its circulation in a year’s time, reaching 1.3 million with the December ’09 issue.”

While the shelter category has been pummeled in the past several years (the shutterings of Hachette Filipacchi’s Metropolitan Home in November and Condé Nast’s Domino magazine in January 2009 being recent major fatalities), Hearst could find success with HGTV Magazine, as it would be following the model established by Food Network Magazine, which had a built-in, engaged readership in the network’s television audience and relies heavily on the channel’s stable of stars, like Ina Garten and Bobby Flay, for content. — Nick Axelrod