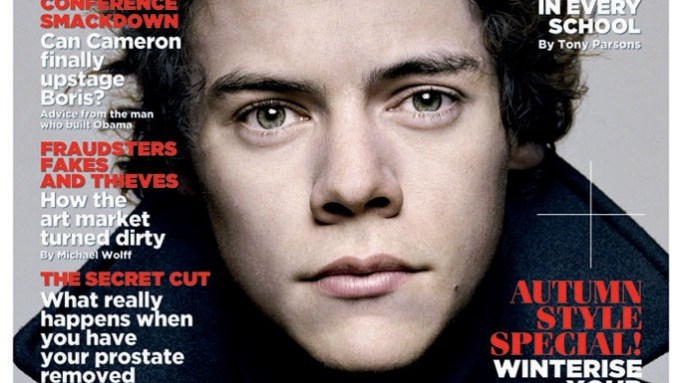 STICKING UP FOR ONE DIRECTION: Word to the wise: Do not tick off One Direction fans. Don’t let their average ages fool you, they are a violent bunch, as both the British and American editions of GQ discovered this week when the band’s legions of fans suffered a sense-of-humor failure after the band tweeted a link to preview the five individual covers of the British magazine.

A worrying number of the band’s 13.8 million followers took umbrage at the magazine’s cover lines, threatening all sorts of violent comeuppance at the misrepresentation of their idol’s sexual morality. Harry Styles, who has a reputation for liking the ladies, especially older ones, appears on his cover with the lines, “He’s up all night to get lucky” and a quote from the interview inside, “It’s definitely less than 100,” in response to a direct question concerning the number of Styles’ conquests.

Seeing those lines sparked an avalanche of tweets aimed at @BritishGQ, many suggesting that suicide by the magazine’s staff would be a suitable apology for misrepresenting the pop star’s reasons for being “up all night.”

British GQ’s Web site posted an article with the “most terrifying responses” to the covers, and jokingly warned that “the following article contains serious abuses of caps lock.”

U.S. GQ’s social media editor Nate Erickson was caught in the fusillade of abuse after he drew the sniper laser of fans’ wrath to himself with the tweet, “‘fandom’ people are the scariest people in the universe.” He was then targeted by tweets, including one suggesting that he “go to Wal-Mart, buy some damn intelligence and burn in hell.”

“All credit goes to our trans-Atlantic brethren at British GQ, who’ve been enjoying your feedback to their One Direction interview just as much as we have,” said Erickson in an online article for U.S. GQ, in which he sarcastically deflected the “praise” to the correct title.

The September 2013 issue of British GQ, with its five different covers featuring all of the band members, went on sale on Thursday. This is the first time that One Direction has been featured on the cover of the magazine, which has a circulation of 131,120 across print and digital editions.

At the magazine’s London headquarters at Vogue House on Hanover Square, security told WWD, “We are aware of the Twitter backlash, and we’ve been told to keep an eye out. We haven’t seen anything yet.”

All of which begs the question: What would One Direction say about all this? They are, as British GQ deftly pointed out, the faces of an Office Depot anti-cyber-bullying campaign.