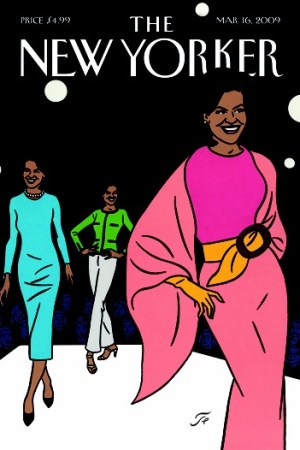 ON THE STREET WITH BILL CUNNINGHAM: The New Yorker’s biannual Style Issue hits newsstands this week with — what else? — a Michelle Obama cover and brief First Lady fashion commentary. (It’s mostly an ode to her arms by The Washington Post’s Robin Givhan, which runs alongside a shot of Obama-favored designers Jason Wu and Thakoon Panichgul.)

Elsewhere in the issue, Ariel Levy adds another fashion darling to her portfolio with a profile of Alber Elbaz (last season, it was Marc Jacobs), and Lauren Collins hits the sidewalk with the diffident New York Times society photographer Bill Cunningham. She describes his willfully ascetic lifestyle, including living in a former artist’s studio “without a private bathroom or cooking facilities,” and sleeping on “a piece of foam, a wooden board and several milk crates.” Sunday Styles editor Trip Gabriel also told Collins that during the Paris collections, Cunningham shuns his colleagues’ comfier accommodations for “a cheapo hotel that has no phones in the rooms,” reserved via postcard.

“Part of what he does is blend into the sidewalk, and I think he thinks [a more public persona] would compromise his ability to get people with the unposed, spontaneous look of his shots,” Collins told WWD. And what with being out nearly every day for street shots and almost nightly for party coverage, she said of Cunningham, “I wouldn’t imagine that he spends a lot of time in his milk-crate bed.” — Irin Carmon

A PORTRAIT OF THE ARTIST: Fresh on the heels of photographing the spring ad campaign for Prada’s men’s line, Hedi Slimane has focused his lens on Los Angeles-based artists. The former Dior Homme designer assembled an impromptu studio at the Mandrake Bar, a low-key watering hole opened by artists Justin Beal and Drew Heitzler in the middle of Culver City’s art galleries, to take photos of artists for his personal Web site. He later posted a series of 19 images on Dazed & Confused’s digital publication. As might be expected of creatives who’d rather stand behind a canvas than in front of a camera, rarely do any of Slimane’s subjects look directly at the lens. Kori Newkirk actually covers his face with his hands. The black-and-white set includes a close-up of Beal’s baby face seasoned with stubble and an image of Whitney Bedford hiding under a fringe of blonde hair.

The ongoing project helps put a face to Los Angeles’ vibrant art scene, which began attracting Slimane’s interest a couple of years ago.

“I did a previous project on New York-based artists a few years ago, but I spend most of my time in Los Angeles, and have observed how the artists in L.A. are rejuvenating the L.A. art scene,” Slimane explained. “The sense of expansion [and] the possibilities offered to artists to experiment with space, remind me of Berlin. Besides, the tradition of Southern Californian art has always [had] a strong impact on me.”

As for returning to fashion, Slimane acknowledged it is an option. “It is an interesting time now to observe and see how design — and the rules of the industry around [it] — will evolve and eventually transform,” he said. — Khanh T.L. Tran