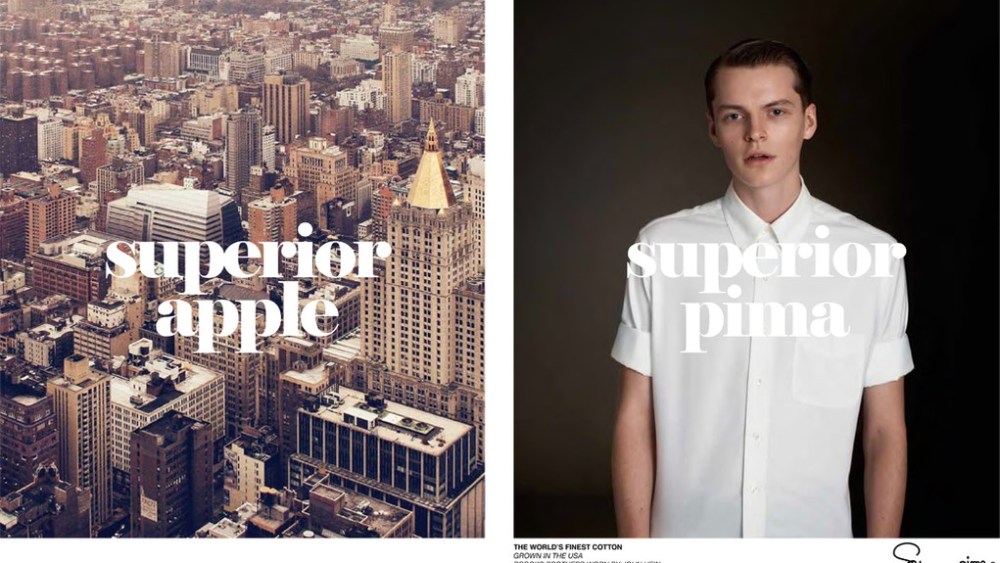 The campaign was conceived by JLF, the new fashion and luxury division of creative agency Johannes Leonardo. The campaign is a take on the Supima name and features a series of metaphorical, witty interpretations of what superior can mean. The style mixes art and fashion photography and modern and retro feels.

To shoot the fashion photography, JLF creative director Ferdinando Verderi selected fine art photographer Roe Ethridge, whose work has been shown at the Whitney Biennial and the Museum of Modern Art. “We were interested in expressing Superior as a state of mind — not simply about cotton, but about life,” said Verderi. The goal of the campaign, Verderi said, is to “create a never-ending series of executions, through which the Superior attitude will come to life in…subtlety and wit. The confident yet playful tone was inspired by iconic Supima imagery from the Fifties and Sixties.”

The first iteration of the campaign features models Tatiana Cotliar and John Hein, styled by Alastair McKimm in pieces from some of Supima’s premier licensee partners, including Lacoste, Brooks Brothers and Splendid, as well as designs from Supima’s own brand, sold exclusively at Bloomingdale’s.

“We felt the time was right to make an emotional appeal directly to lifestyle consumers,” said Buxton Midyette, Supima’s vice president of marketing. “The best way to do this was by showcasing the impressive array of Supima product offered by some of our key partners.”

Midyette wouldn’t divulge the campaign’s budget, but said it represents “a sizable investment for Supima.”