During a wide-ranging interview on Monday, Menkes reflected on her career, the evolution of fashion journalism, and how people misconstrue her image.

By Miles Socha and Laure Guilbault on March 4, 2014
View Slideshow

During a wide-ranging interview on Monday, Menkes reflected on her career, the evolution of fashion journalism, and how people misconstrue her image. 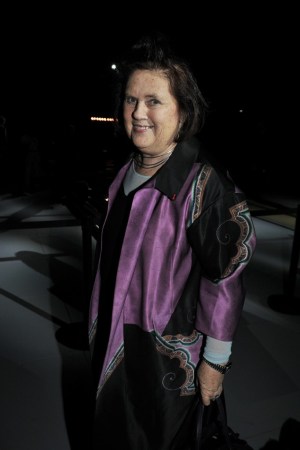 PARIS — “I think everything now is written for an international world.”

This story first appeared in the March 4, 2014 issue of WWD. Subscribe Today.

So says journalist Suzy Menkes, who on Monday disclosed plans to move from the International New York Times after 26 years at the Paris-based newspaper to Condé Nast International, where she will become a critic and reporter for all the international Vogue Web sites.

Jonathan Newhouse, chairman and chief executive officer of Condé Nast International, said Menkes’ role is a new one, and she would probably start in time for the Paris couture in July.

“Suzy’s role with us will be exactly the same as it was with the newspaper. She will do her reviews, her reportage — the same brilliant journalistic output that made her a reference,” Newhouse told WWD. “People will have to go to our Web sites in order to know what Suzy has to say. It reflects our commitment to quality journalism and to digital.”

CNI has 19 Vogue Web sites in countries including the U.K., France, Italy, China, Russia, Japan, Germany and Spain. Menkes will not contribute to the Web site for American Vogue, which is operated by Condé Nast U.S.

“I think it’s the most wonderful opportunity,” Menkes said of her new role. “Change is good. It’s what fashion is all about.”

In addition to reporting, Menkes will be involved in organizing an annual CNI conference devoted to the luxury goods industry.

Newhouse said the first would likely take place in 2015.

Menkes’ move, falling during Paris Fashion Week, generated intense chatter at the shows. It also creates another empty seat on the fashion desk at The New York Times, coming roughly a month after lead critic Cathy Horyn left her post after a 15-year tenure.

A succession plan has yet to be disclosed, although sources said a search is under way to replace Horyn.

In a note to employees on Monday signed by Stephen Dunbar-Johnson, international president of The New York Times Co., and Europe editor Dick Stevenson, the duo said Menkes’ legacy “will be with us always.”

That said, “We, too, will move on with our commitment to covering fashion to the highest possible journalistic standards as resolute as ever,” Dunbar-Johnson and Stevenson wrote. “We will be announcing a new lineup to take our fashion legacy into a fresh new era in the very near future.”

They noted that the newspaper has always covered fashion “assiduously” through its 126-year history, with Eugenia Sheppard and Hebe Dorsey among critics who built the title’s reputation, known as the International Herald Tribune until last year. “But Suzy with her fierce intelligence, razor-sharp pen, love for fashion and enormous capacity for hard work has built it from there.”

“I’ve always had tremendous admiration for her and wished there was a way to bring her talent into our organization in a meaningful way,” he said.

Newhouse hinted talks with Menkes began some time ago, noting that when the Times took sole possession of the IHT in 2003 — previously it was a joint venture with The Washington Post Co. — it provided a “psychological opening for discussions.”

Menkes is to be based at the CNI office in London. On Monday, she lauded the “absolutely unflinching support of the International Herald Tribune as it then was. As we all know, fashion and designers can be very difficult, but anytime I was having pressure put on me, my editors and my editor in chief stood rock solid there for me and I will never forget that.”

Does she expect to enjoy the same freedom of expression writing for a publisher of glossy consumer magazines?

“Jonathan and I have talked about that and, I mean after all, unless you say what you think, what’s the point of saying anything?” said Menkes, who will report to Newhouse. “I love my present job and I hope I will love my new job. That’s the secret, isn’t it? To enjoy what you do.”

Renowned for her incisive opinions, vast cultural register, work drive and speed — she whipped off her fall Prada review in 17 minutes to meet her deadline for Asian issues — Menkes said she would not stray from the strict professional codes of the Times, which prohibit gifts and junkets.

“I’m not sure that I can go back on 40 years of that attitude,” she said, noting her previous employers also had the same policy. “Anyway, I’ve got enough handbags already,” she added, smiling sweetly.

Menkes joined the IHT as style editor in 1988 and was named international fashion editor of the International New York Times when it was re-branded last year.

She has also worked for The Times in London, the London Evening Standard and The Independent newspapers. Menkes is a graduate of Cambridge University, where she was the first female editor of the university’s newspaper.

During a wide-ranging interview on Monday in her element — the front row of a fashion show — Menkes reflected on her career, the evolution of fashion journalism, and how people misconstrue her image. Here, highlights of the talk:

WWD: You are arguably top dog at any fashion show, with all doors open to you. Was that always the case?

Suzy Menkes: You know, I’ve been doing fashion a very long time. I started in 1968 and I certainly did not get in [to shows] easily. But I never thought it was my right to sit in the front row. And I might have earned the right now, but I have very many memories of getting into shows. In fact, I’m very smart at getting in through the back door.

WWD: Was the job easier, or grittier, during the days before cell phones, Instagram and digital photography?

S.M.: I must admit the real problem without the cell phones was to find a phone. I have a great memory of the Courrèges moon collection and I had a colleague trying to get out early, feigning that she wasn’t feeling very well, and I knew she was going to beat me to the phone box, which was the only one in Paris as far as I can remember that you could get to. So because I spoke French, I said to the people, you must look after my poor friend, she is very ill. Make sure she doesn’t get out and I swept out, ran for the telephone box and dictated my story.

WWD: What are some of the biggest changes you’ve seen in fashion journalism in your career?

Fashion editors wrote their stories, but it was considered to be something that only those who were very much involved would read or be interested in. That has totally changed, especially now with the digital world, but it changed long before that to me.

WWD: Were you told you had to cover so many fashion shows or do you take it upon yourself to go to so many?

S.M.: I do like to see collections, because — and this is not a boasting session — but the fact that I saw Raf Simons right from the very beginning when he had these young kids and the clothes and the music — you understand so much more about a designer when you see them grow than if you see them arrive fully formed.

I’m a very curious person. I’m interested in seeing things….I am a journalist, and while other people call themselves fashion critics, I call myself a journalist. And I like to get out there where it’s happening. That’s what I do.

WWD: Do you see a future for newspapers and print journalism?

S.M.: There is always going to be a place for wonderful magazines with fantastic pictures. I also believe that with newspapers, there will be a royalty of newspapers who will survive in the print form, maybe not all over the world.

WWD: And how do you see digital evolving?

S.M.: There’s also going to be an enormous continuing spread online, and of course I love it because it’s fast.

That said, I think at the moment, the online media in fashion is just an absolute mass of stuff that will thin out as everything does. Just as some magazines ultimately don’t survive and others rise to the top, so it will be with writers.

WWD: But you think fashion journalism is still a great career?

S.M.: I think you have to have your heart in fashion writing if you want to do it. I don’t think it’s enough to love fashion. I have this motto that I have said to anyone I have ever worked with, “It’s not good because you like it; you like it because it’s good.”

WWD: Any misconceptions about you that you’d like to clear up?

S.M.: People think I’m so solemn and so serious. My friends know I love nothing more than a laugh and a joke.