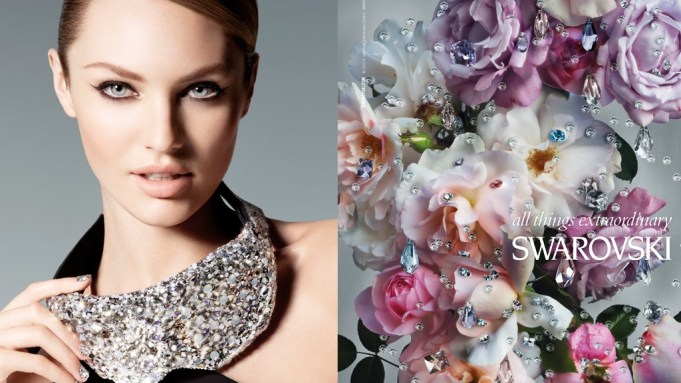 SPARKLE PLENTY: Crystals may be tiny and shiny — but they’re certainly not for wimps. That’s the message from Swarovski, whose latest corporate ad campaign broke Monday in Love magazine. Created by Ronnie Cooke Newhouse of House + Holme in London, and shot by Nick Knight, the campaign features lots of glitter — but no specific product.

It features model Candice Swanepoel in a variety of poses with crystal-encrusted objects including a motorcycle helmet, a baby barbell and ski goggles. Other images show pink and lavender flowers in full bloom and dripping with crystals like raindrops.

“We wanted the campaign to capture the essence of the cool, contemporary woman,” said Nadja Swarovski, a member of the executive board, Swarovski Crystal Business. “Beautiful, healthy and strong, she is in charge and can compete in any way. She is also fun and kind of humorous. Nick catches her spirit perfectly. But more importantly, this is an overarching corporate campaign celebrating the modern woman and Swarovski crystal as a design ingredient supporting creative expression.”

Cooke Newhouse said about her springboard for the campaign: “I saw a common thread between the natural beauty of flowers, which need light in order to grow and be seen, and the finely crafted beauty of crystals which come alive in the light.” The campaign will also appear in the March issues of titles including the British, American, and Chinese editions of Vogue; British Harper’s Bazaar, and Vanity Fair.