WWD talked to security experts about the slap bound to be on repeat all week. 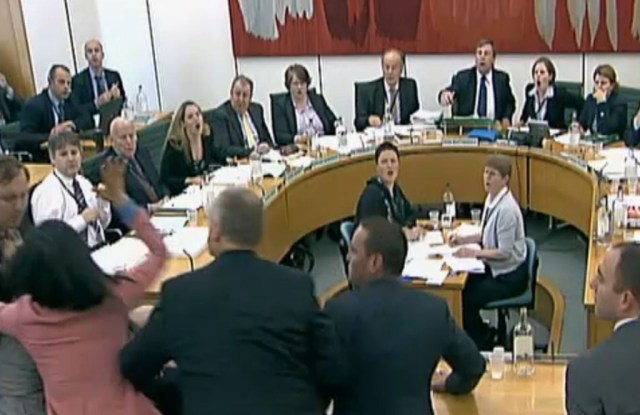 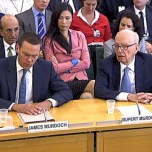 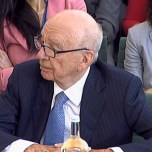 For much of Tuesday’s parliamentary grilling of Rupert and James Murdoch over misdeeds at their company’s British tabloids, Wendi Murdoch, the News Corp. chairman’s wife, sat one row behind and directly in between her stepson and husband. She wore a conservative pink jacket, blue blouse and an expression that ranged, during the long hours of testimony, from stone-faced to nonplussed to “make my day.”

When comedian and anti-austerity activist Jonathan “Jonnie Marbles” May-Bowles attempted to land a pie in her husband’s face, Murdoch leaped up, reached around a bystander and landed a fierce overhand right to the assailant’s forehead. That was it for those watching at home, who lost both figures as Murdoch followed the attacker out of the frame. Daily Telegraph political reporter James Kirkup, who was in the hearing, gave the wider angle on the paper’s Web site.

“First, she swung a slap at her husband’s attacker,” he wrote. “She followed up by picking up the plate and trying to strike him with it. And then she moved back to her husband. Sitting on the table before him, she started to clear the foam from his face, sometimes embracing him, holding his bald head in her arms.”

And thus an Internet star was born. Wendi Murdoch has been a media figure since she married the twice-divorced Murdoch, who is 38 years her senior, in 1999. She’s been his companion in both the business world — where she’s advised on the disastrous acquisition of MySpace and lately dabbled in production work for News Corp.’s Twentieth Century Fox — and the social circuit — where the pair are black-tie regulars. But with the thwarted attack destined to bring her new levels of fame, and replays of the slap fated to run on loop all week, WWD checked in with a few experts to assess her technique.

“She happened to be close by and notice it,” said Joe LaSorsa, a former Secret Service agent who now runs his own security firm, J.A. LaSorsa & Associates.

“Whether it’s her or you or me, your reaction is to try to prevent it,” LaSorsa continued. He was much more concerned with the breakdowns that allowed May-Bowles in the room to being with. “It was a valiant attempt on her part, but if it would have been a dangerous chemical, he would have been in a bind there,” he said.

Clark Pena, director of marketing at personal protection firm Security USA, gave Deng’s reaction much higher marks. (Though he is in the public relations wing of the company, Pena assured that he had law enforcement and military experience. “It’s kind of a prerequisite here,” he said.) “Amazing, you gotta give it to her,” Pena said after viewing video of the incident.

“Just the mere fact that she was able to stop the attack and that she stopped any further attack,” Pena went on, “this is really something.”

In the course of conversation, Pena learned that Deng’s first producing effort for Twentieth Century Fox, “Snow Flower and the Secret Fan,” had the bad fortune to open last weekend, while the extended Murdoch clan was in the throes of scandal.