Talking the Enquirer Take on Celebrity

NEW YORK — Every magazine and newspaper ought to have a mission statement as clear as that of the National Enquirer. “The Enquirer exists because celebrities do stupid things they later regret,” declares longtime editorial director... 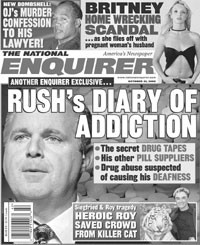 NEW YORK — Every magazine and newspaper ought to have a mission statement as clear as that of the National Enquirer. “The Enquirer exists because celebrities do stupid things they later regret,” declares longtime editorial director Iain Calder in his new book, “The Untold Story: My 20 Years Running the National Enquirer” (Miramax Books). In the book, which will be published later this month, Calder recounts great moments in tabloid history, from smuggling a photographer dressed as a priest into Graceland to capture Elvis’ body, to a near-miss attempt on President Carter’s life by a harpoon gun-wielding assassin. WWD spoke recently with Calder, who retired in 1995, about the state of celebrity journalism and the Enquirer’s surprisingly deep cultural legacy.

WWD: Twenty years ago, the Enquirer had an average circulation of more than 5 million. Now it’s about 1.5 million. What happened?

Then television got into the act. Daily papers found that their circulation was declining, so they started getting into doing celebrities. Between TV and newspapers and magazines, we had a lot more competition to do the stories that we once had the ability to do alone.

Second, when [longtime Enquirer owner] Gene Pope was alive, he only cared about circulation, not profits. We kept the price down because he felt if we took the price up it would allow other publications to come into the market. It didn’t matter if we lost money in a year. I could spend anything I wanted. When Gene died in 1988, we were taken over by another company, Boston Ventures. They came up with a plan that would make a lot more money but lose circulation. That was their plan, and it worked.

WWD: When you look around at the celebrity weeklies that are big now, how much of the Enquirer do you see in their DNA?

IC: The beginning of it, the original building blocks, was all Enquirer. The execution is not. They don’t go after the real stories. They’re all very soft, and they’re very nice, and they want to show dresses and tell about how wonderful people are. The public relations people in Hollywood are very powerful now and they to some extent control the editorial. Nobody controlled the Enquirer. They worked with us, because they had to. We would have celebrities and p.r. people working with us, but they said, ‘You can’t tell anybody.’ Then they could go and say, ‘I don’t know how the writer got that story.’

WWD: What’s your opinion of the new Star? How would you feel about seeing the Enquirer go glossy?

IC: I’m reluctant to go too much into that. If anybody can do it, it’s going to be David Pecker [chairman of American Media, which owns Star and the Enquirer]. This is a really smart guy who’s now had a foot in both camps, tabloid and glossy. Clearly it’s not a slam-dunk, but if he thinks it’s got a chance, I would back him.

WWD: Magazine editors are always trying to figure out what it is that makes a given celebrity a big newsstand seller. What’s your take on this?

IC: It’s a good question, but I don’t think it’s the right question. The question isn’t who sells, it’s what story do you do about them. There can be a celebrity that hasn’t sold, but if you come up with a great story, it will sell. Even a star who doesn’t seem to sell very well, you get their exclusive wedding pictures or the first baby photos and it will sell. Same thing if somebody’s suddenly on drugs. Can you imagine saying that you thought Rush Limbaugh could be a cover person? Everyone would laugh at you. Suddenly he’s overdosing on prescription drugs and he’s a big story.

WWD: Is the national infatuation with celebrities greater now than when you were running the Enquirer?

IC: It’s not greater, but it’s different. Just look back 100 years. There were no celebrities in the normal sense that there are now, but people were still interested in gossip. If people found out that the woman down the road had run off with the milkman, that’s an incredible story. People want to know these things. The difference is that no one knows their neighbors anymore. Instead of gossip about the people they know next door, it’s the people they know from television.

WWD: The proliferation of celebrity magazines has produced a boom in the paparazzi business. Is there too much invasion of celebrities’ privacy?

IC: I don’t think you can decide whether there’s too much or too little. It depends where you’re standing. The way to look at it is, what does your reader want? If a huge majority of America wants that information, it’s your job to get it to them. If the American people want it, how can it be all that wrong? Unless you think the American people are evil or rotten, and I don’t. If they’re smart enough and literate enough and moral enough to choose the president of the United States, can’t you trust them to know what paper to buy?

IC: Yes. I’m really quite proud that I was the editor of the Enquirer. I’ve estimated that the number of publications I’ve sold with my name on it as editor was about 4.4 billion. I don’t know if anybody else in the history of journalism could beat that record. Coming from a little mining village in Scotland, I’m quite proud of that.