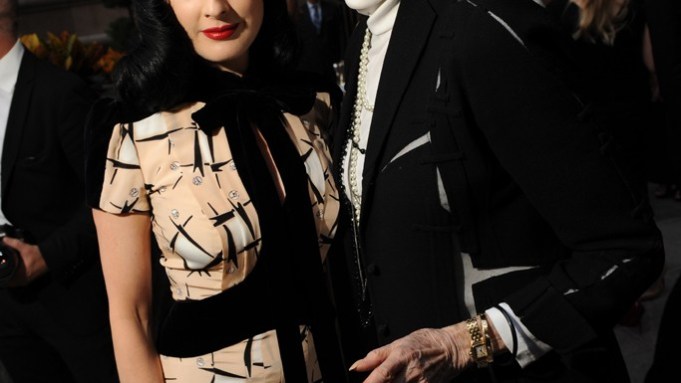 Then there was New York City Police Commissioner Ray Kelly. It was the day before the city’s primary elections, but Kelly had fulfilled his political duties for the day. Earlier that morning at the Association for a Better New York, he blasted the mayoral candidates in a speech that landed him on the front page of the New York Post the next day. Now it was time to mingle. Flanked by wife Veronica, he made a beeline for Jim Kelly, the former managing editor of Time Inc. who is now a contributing editor at Vanity Fair (no relation save for maybe some shared Irish ancestry).

The commish, once floated as a possible mayoralty candidate himself by Mayor Michael Bloomberg, is actually a sucker for a good Vanity Fair party. He even made the trek to the magazine’s party after the White House Correspondents’ Dinner, and seemed relieved to be in another palatial mansion, the historic New York Palace Hotel, where no one bothered him about stop-and-frisk, where he could instead bask in the warm glow of celebrity — Michelle Dockery of “Downton Abbey,” Victor Cruz, Miguel, Dree Hemingway. In one corner, Jonathan Newhouse, chairman and chief executive officer of Condé Nast International, lent his Google Glass to Bob Sauerberg, president of Condé Nast. Kelly had exhausted all his opinions about the mayoral race that morning.

“I have no opinion on it. It doesn’t really affect us,” he said, referring to the primaries. But isn’t he going to have to work with the next mayor?

“The next one. I don’t know about that,” he said. He declined to indulge everyone’s curiosity about his preference for a winner.

“I have not made up my mind about a candidate,” he said.

Truth be told, at the Vanity Fair party, no one wanted to see the billionaire mayor go, not even editor in chief Graydon Carter, an early critic.

“You know something, I see the field of candidates, and I’d actually love for Mike to stick around for another term, I’ll be honest,” Carter said. “I haven’t made up my mind. I have a rough idea. There’s a lot of people I’d rather see mayor than some of the candidates. I’d like to see Fran [Lebowitz] be mayor. And she’s interested. She likes the real estate that comes with it.”

After Vanity Fair, Hemingway, an actress and the great-granddaughter of the author, turned a corner to attend a Bon Appétit dinner for Thom Browne at La Grenouille. Hemingway is registered in California but lives in New York City most of the time. Was she aware the city’s primary elections were Tuesday?

“Does it make me sound stupid if I say no?” she said. “I’m not very good with politics in the sense I don’t follow them enough to have an opinion. I’m into the health initiatives, even though I’m occasionally a smoker. Whether we like it or not, it’s probably a good thing.” She was dubious, though, of the 16-oz. soda bans, arguing that it made more sense to devote energy to other initiatives.

“I think there’s certain things that should be put into action, like organic food and stuff like that,” she said. “I think we should support our local farmers of New York more than just a farmer’s market. We live near such amazing soil in New York State, even in New Jersey.”