Regular front-row fixtures Bryanboy, Susie Lau, Rumi Neely, Kelly Framel and Leandra Medine have become as relevant as the shows they blog about. 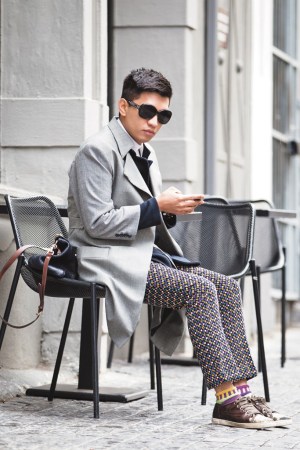 It’s not just the collections that people wait to see during the marathon of fashion weeks, but also the comments and feedback from bloggers who, in the eyes of many, have become as relevant as the shows that they blog about.

Regular front-row fixtures Bryanboy, Style Bubble’s Susie Lau, Fashion Toast’s Rumi Neely, Kelly Framel of The Glamourai and the Man Repeller have laid claim to their fashion insider statuses and prime real estate when it comes to seating assignments. Bloggers sitting front row have become commonplace—as have partnerships with leading brands and fashion houses that often blur the nature of what they do: Reportage and criticism or marketing and promotion?

Related: Social Media: Nobody Does It Better >>

POINT OF VIEW:  “My point of view is extremely personal and intimate. My blog remains how I started it seven years ago [in October 2004]—a personal diary with a heavy focus on travel, fashion and my personal life. I communicate to my readers and followers as if I’m talking to a friend. I also share photos of my obsessions, what I experience in a day, etc.”

TRAINING: No formal training in journalism, and has never held a previous job.

SOURCE OF REVENUE: Advertising is the main source of revenue, but also makes personal appearances at events, collaborates with brands (such as styling a video for H&M) and judged contests for Sunglass Hut’s style blogger and Elle x Nokia Style Correspondent’s search.

SAMPLE POST: “This month, I’m celebrating seven years of my site, Bryanboy.com. Has it really been THAT long? Internet years are like gay relationship years. And gay relationship years are like dog years; one year = seven years. Hah! As most of you guys know, I started my blog in October 2004 as a travel journal. Three years short of a decade later, I’m back to where it all began: Moscow.”

NEXT: Kelly Framel of The Glamourai >>

Kelly Framel of The Glamourai

POINT OF VIEW: “My blog is about personal style and interior design, and I aim to inspire my readers to take that extra time to dress up a bit in the morning, or dress up their home a bit, because I believe that you get out of life what you put in.”

PAGE VIEWS: About 4 million per month.

SOURCE OF REVENUE: Designs her own jewelry, features advertising on the blog, syndicates posts on Glamour.com and styles for brands. She has worked with Christian Dior, Club Monaco, Coach, Erin Fetherston, Forever 21, Juicy Couture, LL Bean, Ralph Lauren, Shu Uemura and designed a razor for Schick Intuition that comes out next year.

SAMPLE POST: Olive and khaki are the more casual alternative to my beloved black and white—and together they made for an effortless outfit comprised of all my new favorite pieces! Let’s start with the hat, shall we? I bought it at Victor Osborne, when I was pulling pieces for a shoot. I’m so excited that my hair’s gotten long enough to peek out from underneath hats just in time for fall.

POINT OF VIEW: “When I started, I wanted to write about fashion from a very personal perspective and try not to make high fashion seem too lofty or highbrow. I wanted to talk about fashion from personal experience, too, so I started taking outfit shots—although that has evolved into a whole fashion blogging genre of its own—because I always thought it was better to put your money where your mouth is by actually practicing said trends, clothes, etc. In addition, I want to promote young and emerging designers.”

TRAINING: Studied history in college, and from the time she founded her blog, in 2006, to May 2010 she maintained full-time jobs—first in digital advertising and then as an editor of Dazed Digital (Web site of Dazed & Confused). She now works on a freelance basis.

SOURCE OF REVENUE: Advertising on the blog and partnerships with Gap, Furla, Selfridges, Uniqlo, Topshop, Club Monaco and Benetton. She also guest edits, styles and does freelance writing.

SHOWS ATTENDED: Attended more than 40 shows in New York, 45 in London, 12 in Milan and 60 in Paris (on behalf of Dazed Digital).

SAMPLE POST: Picking up my first copy of Dazed & Confused when I was fourteen (weirdly, it was the Kate Moss cover that fronts the book—so sue me for being oh-so predictable) felt like a rite of passage. I couldn’t afford to buy the clothes (though you always got the feeling with Dazed that buying STUFF wasn’t why the clothes were in there…).

POINT OF VIEW: “Good fashion is about pleasing women, not men, so as it happens, the trends that we love, men hate. And that is fantastic.”

TRAINING: Graduated with a degree in journalism from the Eugene Lang College The New School for Liberal Arts in 2011.

SOURCE OF REVENUE: Advertising on the blog and partnerships with other brands such as Barney’s New York, Saks Fifth Avenue, Michael Kors, Prabal Gurung, Bobbi Brown, Mackage, Dannijo and Gryphon to style, model, write, and recently, design too.

SHOWS ATTENDED: Attended 30 to 40 in New York and four in Paris, including Alexander Wang, Prabal Gurung and Thakoon.

SAMPLE POST: The big guns come out in Paris, and when I say guns I mean rad footwear, and when I say rad footwear, I am talking banana nuts. Alexander Wang’s Simona fox heel sandals act as one cool-ass hell of a dust-buster on those Tuilerie-grounds. Red velvet loafers give Céline’s silk pants the kiss of bedwear chic and a certain taxicab-yellow pleated mullet skirt gets upstaged by Prada’s dual-print rainbow cross-hatched sandals, which you know, get upstaged too because there’s a croc-purse on her tote. What? You’re a tote.

POINT OF VIEW: “Personal style, photography, and current inspirations.[I influence my followers] by staying true to my instincts and not doing lame stuff. As a blogger you receive a myriad of proposals from companies. What you avoid will define you.”

TRAINING: No formal training in journalism but would love to explore writing as “more of a clear avenue.” Besides her blog, she’s never had a job that’s lasted more than a month.

SOURCE OF REVENUE: In addition to advertising on her blog, she’s currently signed with Next in New York and Les Pros Entertainment in Japan. She’s also designed pieces with RVCA and Dannijo and appeared in an ad campaign for Forever 21.

SAMPLE POST: Outside the Shibuya station on a cold morning, capitalizing on the opportunity to wear this beautiful shearling vest that was sent to my hotel. Not only is Rag & Bone one of my favorite brands (love that they make clothes so applicable to life’s most casual moments…that’s really most of what I care about) but this was the piece I was fixated on from their FW collection.