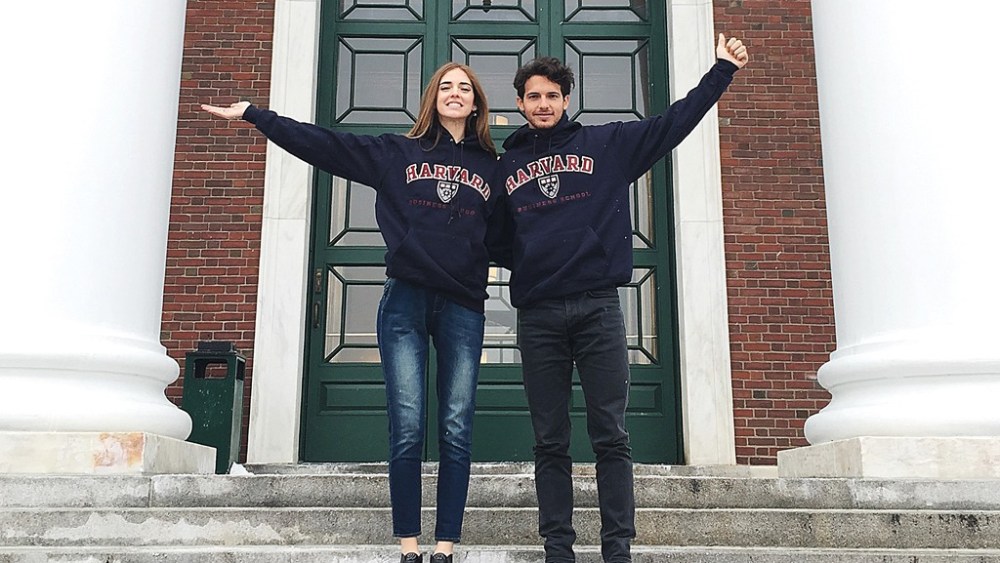 The Blonde Salad’s Chiara Ferragni is forgoing the first day of New York Fashion Week to dig into the nitty-gritty of her business with a group of Harvard Business School students in Boston.

As part of a new luxury marketing course offered to MBA candidates, Anat Keinan, associate professor of business administration in the school’s marketing department, built a course around several case studies, including in-depth looks at the business practices of Stella McCartney, Jimmy Choo and Ferragni’s company. It’s the first case study that Harvard has done on a blogger and explores nearly every aspect of Ferragni’s growing and global business.

The Blonde Salad is powered by the 16-person The Blonde Salad Crew (or TBS Crew). The group helps run Ferragni’s two main businesses: Ferragni as talent, including her blog The Blonde Salad, and Chiara Ferragni Collection, the company’s footwear business. Ferragni has 3.2 million Instagram followers and will be on the cover of international publications from Lucky to Grazia to Vogue to InStyle and Marie Claire during the first quarter this year.

One thing is clear, Ferragni had plenty of help building her brand.

“At the right moment she had a business mind — Riccardo [Pozzoli, cofounder and chief executive officer of The Blonde Salad and Chiara Ferragni Collection],” said Kristina Maslauskaite, a Harvard Business School associate who worked on the case with Keinan. “He was the driver behind the business-development part, which helped her get more popular and eventually generate revenue.”

The study addresses issues such as whether Chiara Ferragni Collection — a separate company still under the TBS Crew umbrella — should be merged with The Blonde Salad or be kept apart. Keinan also explores topics like advertising on the site, editorial independence and whether Ferragni should become more autonomous from brand partnerships.

Keinan, who wanted to highlight women in fashion with the class, spent the past few months studying all things Ferragni through in-person interviews and conference calls. The culmination of the study occurred in Keinan’s class, where Ferragni, Pozzoli and group general manager Alessio Sanzogni fielded questions from students.

Currently, the Chiara Ferragni Collection is the brand’s main revenue driver. About to enter its fourth season, the team started to aggressively roll out the brand globally in fall 2013. Ferragni’s shoes, which retail from $220 to $500, are carried in 250 doors spanning 27 countries and have just hit the U.S. market for the spring season at retailers such as Intermix and Fred Segal. Last year, the collection brought in $5.1 million of the group’s total $7 million in revenue.

Despite this, actual traffic to the site is flat from last year, largely due to Instagram cannibalization and a repositioning of the brand and the editorial mission of the Web site.

The TBS crew is focusing more on the creation of independent content (fashion editor of Marie Claire’s Italian site, Francesca Zaccagnini, joined the team and now spearheads editorial), as well as becoming increasingly selective about the brands they partner with.

“[This] meant that The Blonde Salad envisaged to only cooperate with a limited number of luxury fashion advertisers, inevitably reducing the blog’s revenues,” Keinan said about the site in an e-mail.

While flat traffic and a failure to meet advertising revenues could indicate that the business is starting to slow down, Pozzoli explained in the study that the priority was to build “exclusive, long-term partnerships with a limited number of brands.” He recalled a meeting he had with Gucci in Milan in the fall, where the fashion house said they would not advertise on theblondesalad.com alongside banner ads from an Italian mobile operator. Even though the mobile company drove around $35,000 to $45,000 for two to three days of ads, Pozzoli was willing to sacrifice this revenue to have brands such as Gucci advertise.

It’s not hurting the company too much, though. Sanzogni projects the business will hit $9 million in revenue this year, with about $7 million of that coming from retail. The balance of the revenues are expected to come from advertising on the blog and fees that Ferragni pulls in for modeling, personal appearances and so on. He said the business overall is profitable, with a profit range of around 15 percent, most of which is reinvested in the business.

Next month, Ferragni will branch out into other product categories via a capsule collection to be sold exclusively on chiaraferragnicollection.com, including a backpack, a beanie, a T-shirt and an iPhone case all adorned with the “eye” motif from Ferragni’s best-selling shoe style.