The ruggedly handsome Sébastien Jondeau has worked for the designer for 14 years, and also acts as his bodyguard. 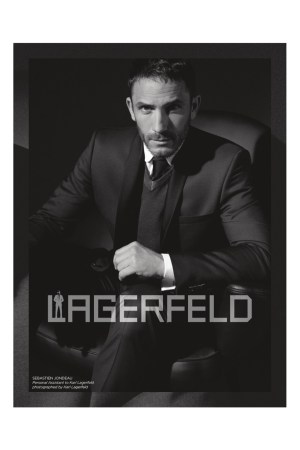 THE BODYGUARD: Posing for an ad campaign surely goes beyond the job description for most personal assistants. But ruggedly handsome Sébastien Jondeau — who has worked for Karl Lagerfeld for 14 years, and also acts as his bodyguard — was happy to oblige and appear in the Lagerfeld fall campaign.

To be unveiled on July 1 at the Bread & Butter trade fair in Berlin, the ads showcase a men’s wear range produced under license since 1990 by Miltenberg, Germany-based F.D. Fashion Herrenmode GmbH. The campaign is to break in the September issue of GQ Style in France, with the media buy focused on that country and Germany, where the first new-look Lagerfeld store just opened in Berlin. (A Munich unit is to follow in August.)

Jondeau, a boxing enthusiast from the suburbs of Paris, also talked about his working life in a poignant, two-and-a-half-minute video clip made during the fashion shoot at Lagerfeld’s studio.

“I spend all my time with him,” says Jondeau, 38, the devotion plain in his eyes. “He’s my boss and I respect him.” Asked if he would go to any length protecting the designer in the event of danger, Jondeau looks right in the camera and says, “Of course, to the end. I have no limits, to protect him at least.”

A teaser of the clip is to go live today on Karl.com and the fashion house’s YouTube and Facebook pages.