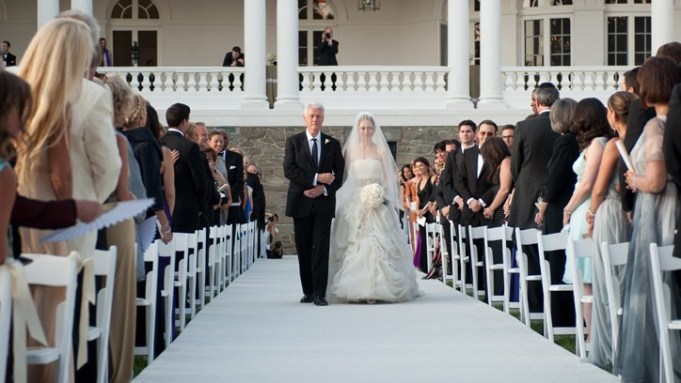 RHINEBECK, N.Y. — Talk about covert operations — Chelsea Clinton’s wedding Saturday to Marc Mezvinsky in this bucolic town nestled near the Hudson was just that. But as the Clintons know only too well from their days in the White House, nothing can stay secret for long.

By the time the guests of honor bid their good-byes at Sunday’s farewell brunch at an idyllic farm outside of town, a few details of the “wedding of the year” (and it’s only August), began to trickle out. For one, the wedding festivities at the Stanford White-designed Astor Courts rolled on well into Sunday morning, with some diehards sticking around until 3 a.m.

The bride double-dipped with Vera Wang, wearing an ivory strapless gown by the designer with a raw-edged laser-cut silk organza skirt for the interfaith ceremony and a silk tulle cross-back Grecian gown with a narrow grosgrain black belt for the reception. The former first daughter also tapped Wang, who was among the 400 guests, to design the bridesmaids’ dresses, strapless bias-cut lavender chiffon gowns with a side drape and a contrasting plum bow. It was a big weekend for Wang who also dressed Alicia Keys, who wed Swiss Beatz Saturday.

Clinton and Mezvinsky’s good friend Christopher Bailey of Burberry suited him up, and did the honors with the shirts and ties for Bill Clinton and the groomsmen. While Mezvinsky turned to two of his brothers, Andrew and Vu Pham, to be his best men, his bride relied on her longtime friend Nicole Davidson Fox as maid of honor. After dining on farm fresh salad, risotto, beef short ribs and grilled fish, guests amidst the all-ivory decor tucked into what was described by one as an “amazing” multitiered cake. But the real treat were the toasts provided by Hillary and Bill Clinton. The former president warmed up the crowd with the well-worn punch line of how he was “looking forward to having some company because I’m outnumbered.” Striking a more serious note and speaking on behalf of Hillary Clinton, he was said go on to tell the crowd, “Despite the fact that we have had interesting careers, we still consider the most important job we ever had to being the parents of Chelsea.” And they certainly paid a pretty penny to mark the wedding of their only child, with cost estimates ranging wildly from $1 million up to $5 million. As to who footed the bill for the extensive manpower of Secret Service and state and local police, that remained unclear Sunday.

The newlyweds are now off on a two-week-plus honeymoon to an undisclosed location (naturally).

The newlyweds held their own with a first dance that stole the show. “They were amazing. It was like watching ‘Dancing with the Stars,’” one guest said. “They definitely took lessons.”

The festivities kicked off Friday with a rehearsal dinner, although, serene as can be, Chelsea Clinton had the wherewithal to call it an early night, skipping the after party, essentially cocktails at the Beekman Arms. “Once the word was Chelsea-is-not-coming, the party was over. The bar cleared out by 11:30 p.m.,” according to one staffer.

On her wedding day, the bride’s elegant updo — much like the one she wore when spotted last week by WWD under an enormous straw hat en route to Wang’s showroom —only accentuated her lithesome frame from months of SoulCycle and Core Fusion exercises classes. (Her hair was said to have been done by Isabelle Goetz, who also did Hillary Clinton’s tresses). Her father also looked to be in tip-top shape, appearing to have made good on his promise to slim down before walking her down the aisle.

Contrary to the pre-wedding local buzz that churned out all sorts of inaccurate celebrity sightings including Oprah Winfrey, the guest list was relatively VIP-free. Madeleine Albright, Vernon Jordan, Ted Danson and wife Mary Steenburgen and Steve Bing were among the exceptions. “It was relatively low-key. You had to really know Chelsea or Marc. There weren’t a lot of people who are splashed on the pages of People magazine,” one attendee said.

The few boldface names that made the cut managed to upend this historic Duchess County town 100 miles north of the couple’s Gramercy apartment in New York City. Residents grabbed their cameras, as did the paparazzi, when Wang strolled into town, or “Wong” as some locals insisted (although she avoided them after lunch Saturday at Gigi’s by seeming to slip out a back entrance). Albright caused a frenzy Saturday afternoon by also dining at the not-so-private all-glass trattoria, where Bill Clinton and his brother Roger chose to break bread Friday. One twentysomething onlooker commented, “Look at this. When was the last time you even heard Madeleine Albright’s name? I bet half these people couldn’t even tell you what she did and everyone is pointing a cellphone camera in her face.”

Striding out of the restaurant with a pack of photographers and cameramen in tow, even the former madame secretary seemed bemused by all the attention. Known for her treasure chest of brooches, which prompted her to write “Read My Pins” last year, Albright was tight-lipped about her choice for the wedding. Asked what type of pin Saturday’s occasion called for, Albright said, “You will have to wait until tonight to see.”

As if — all media were barred from the ceremony and reception at Astor Courts. Some lensmen and scribes resorted to standing on benches to peer over a picket fence to eye guests at the Delamater Inn boarding dark-tinted minivans and a Peter Pan bus.

Burberry’s Christopher Bailey was one of a smattering of guests who dashed to the departure site unescorted, and the only one who actually stopped for a question. The Londoner would only say “could be” when asked whether he was dressing the groom for the wedding. Bailey was more forthcoming about his connection to the newlyweds. “Sharing in the happiness of Chelsea and Marc” was by far the best part of the whole affair, he said. “Simon, my partner, was at Oxford with Chelsea and Marc, and I love them very much,” said Bailey, who designed Mezvinsky’s black-tie outfit as a favor.

Not everyone was feeling the love to that degree. As the wedding-bound shuttle buses passed, James Langan, executive editor of the Hudson Valley News, said he never envisioned the wedding-related interviews he did for Paris Match, Japanese TV and a range of other international news outlets. Shaking his head at a slow-moving convertible carrying a couple wearing Bill and Hillary Clinton masks and waving to the media pack as if they were in a parade, he said, “The fact that the Clintons have not confirmed that the wedding is actually happening in Rhinebeck or anything else is somewhere between insane and manipulative. And as a result of the absence of information, there is a media frenzy.”

State and local police officers manned the entrances and exits of some hotels, and they too seemed relieved to see the crowds disperse. As for when the revelers would make the return trip, Ken Scattergood, a Rhinebeck policeman, just shrugged, “Two, three this morning — I’ll be sawing wood by then.”

As it turned out, the first shuttle bus didn’t leave the reception until 1 a.m. — two hours later than planned, one attendee said. Others didn’t turn in until 3 a.m.

Astor Courts’ owners wasted no time in trying to capitalize on last weekend’s publicity. Sunday’s New York Post featured a front-page photo of Bill Clinton walking his daughter down the aisle, while on page 2 was a full-page ad for the property where the wedding was held that proclaimed, “Yes, It’s for Sale. Home of the Recent Celebrity Wedding.” But the 50-acre property wasn’t the only local business trying to cash in. Joovay lingerie shop stocked up on Spanxx, a popular last minute pre-wedding purchase, and Haven Spa was said to be getting the bridesmaids glam on Saturday afternoon. In Face Stockholm’s store window, a wedding dress-wearing model had her makeup done by a man in a black suit. Co-owner and president Martina Arfwidson said a Clinton handler had requested video footage to display on the couple’s post-wedding Web site. But she was more jazzed about how the attention boosted local morale. “This is the first since the recession [started] that there is a sense of optimism and pride. I was just out on the street and there are housewives, business owners and all sorts of people. Everyone is so thrilled to have something good come to town,” said Arfwidson.

Not everyone was so upbeat, though. Another store owner, who requested anonymity, was less enthused, claiming last weekend was the slowest all summer. “People who come to gawk at celebrities don’t buy clothes,” he said.

Earlier in the week Samuel’s Coffee Shop welcomed “The Daily Show” for an impromptu taping, but owner Ira Gutner was gunning for what’s to follow. “This wedding is not about this weekend. This is about the next few months and the next few years. This is going to be incredible for Rhinebeck. We will forever be known as the town where Chelsea and Marc got married.”