Linda Wells' position as beauty editor-at-large with The Cut was celebrated with a dinner Monday night. 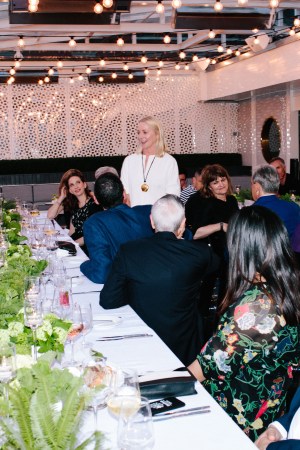 Time flies when you’re at The Cut.

“I have no idea,” Linda Wells said Monday night from the rooftop of La Sirena, when asked how long she’s been writing for the New York Magazine site. “I never keep track of time, so you’ll have to ask someone else.”

Wells was being toasted with a dinner — however many months later — for her new gig with the fashion, beauty and culture site, which came on the heels of her departure from Allure, in November 2015, after 24 years. She was appointed beauty editor at large at The Cut following the layoff (in February, for the record).

“To me, first of all, they’re so open and so enthusiastic and so uncomplicated — it’s just like, ‘Sure, do it,’ ” Wells said of joining the site. “I haven’t really written like this and reported like this since I was at The New York Times. I would write an editor’s letter [while at Allure], but it was not the same. I rewrote a lot, but I wasn’t writing my own stuff.”

Her approach to the content she produces for The Cut is, she explained, an organic one. “Anytime something pops in my head, I’m like, ‘What about this? What about Donald Trump’s fake tan? Let’s do something on that,’ and they’re like, ‘Go for it.’ I love interviewing people. I love reporting stories and getting out and talking to people about different things.”

She added that the format of a digital-only publication was attractive to her. “I think it’s also an enormous sense of instant gratification, so besides them being amazing, you get comments — I mean, you don’t get those kinds of comments on women’s magazine sites,” she said. “[The readers are] in, and they’re talking and they’re engaged. They love it or they hate it or they want to know something, and you really do feel like it’s a different experience. It’s more of a conversation.”

Many of these readers are longtime fans of Wells, women who have been reading her work “for ages, and they want to chat. It’s fun. They feel like they have a relationship with me, and it’s nice — a lot of it is feeling love.”

Her pieces so far have gone behind-the-scenes at Sephora, discussed Wells’ love of SoulCycle and have tackled the ever-sparring topic of Donald Trump’s appearance. “I had a fun time doing that story on Donald Trump’s fake tan,” she said. “My advice to him on how to do a better job — which he clearly isn’t listening to, I’m sorry to say.” As for the Sephora story, which followed her day spent working at the beauty retailer, she said she wished she’d done it “15 years ago. The most surprising thing was their attitude about shoplifting. They don’t want to burst the bubble of the happiness there, so if people shoplift, what they do is they’ll say, ‘Oh, I see you’re very interested in the Troy Surratt mascara. Can I tell you a little more about it?’ And people are usually so humiliated, they pull it out of their pockets.”

As for beauty tips on coping with the high humidity New York battled the day of the party? “I got my hair blown out, and then it rained sideways as I left the salon, so here we are.”