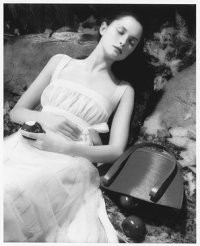 According to Mike Toth, president and creative director of Toth Brand Imaging, they are among the handful of visionary brands that can bridge the worlds of fashion and advertising. “It’s difficult for ad agencies to do good fashion, and for fashion people to do good branding,” said Toth, who has written a book with writer Jennie D’Amato called “Fashion Icon: The Power and Influence of Graphic Design” (Rockport Publishers, $50). The coffee-table book comes out May 15.

In an interview here, Toth explained that the brands and people he writes about in the book are the ones “who can maintain a brand’s relevance throughout the course of time, keeping it fresh and relevant, with surprises.” The book showcases those whom Toth believes do innovative work in print advertising, retailing, photography, magazines, packaging and shopping bags.

Creative executives, such as Reed Krakoff and Trey Laird, who are behind such ground-breaking campaigns for Coach and Donna Karan, respectively, are featured, as are the ad campaigns for Kate Spade, Jack Spade, Louis Vuitton, Christian Dior, Diesel and Marc Jacobs Perfume. The book also illustrates unusual packaging concepts, such as Thomas Pink’s rock-candy pink rectangular tie box, Hermès’ distinctive orange box with brown ribbons and Prada’s cleansing products that come in peel-back wrappers. Shopping bags are also tapped as an important branding mechanism, like those by Tiffany and Fendi. Cutting-edge stores, which the author calls “destinations in their own right, pure theatre,” are also critical to creating a brand’s aura, such as those by Prada (designed by Rem Koolhaas), Niketown, Diesel, and Collette in Paris.

The book also devotes a section to creative imagery and cites such photographers as Nick Knight and Peter Lindbergh, as well as books and magazines such as “Swell: A Girl’s Guide to the Good Life,” by Cynthia Rowley and Ilene Rosenzweig, Harper’s Bazaar and Visionaire .

Toth said he was approached in November 2001 by Rockport to work on a book to help people understand the mystery that surrounds fashion, particularly what makes accessible fashion brands work. After his team figured out which companies did a great job of fashion branding, they had to convince them to be part of the project. He and his team did most of their work by telephone. While several well-known brands are featured, a few are omitted, namely Calvin Klein and Ralph Lauren.

“We didn’t ask Calvin. We didn’t want to go after the obvious ones. The only one who turned us down is Ralph Lauren, who was busy with two books coming out,” said Toth.

In the book, several creative executives give their points of view about branding, and what creates a lasting brand. For example, Laird, president and executive creative director of Laird & Partners, which handles such accounts as Donna Karan, Gap and Nautica (who last week won the account from Toth), said, “Brands have an essence, a point of view, feelings, style and sensibility — like a person. And you play it out. The best brands constantly move forward. Always within their personality. They are clean and consistent, without being repetitive or boring.”

Lindbergh said, “For a brand to come alive through a woman, there has to be a triangular relationship between the designer, model and photographer.” Otherwise, he said, “the pictures are cold and more philosophical.” The downside occurs when a model becomes a supermodel and she competes with the brand for attention — all except, that is, Linda Evangelista. “Linda is a model I love to shoot,” Lindbergh said. “She is a chameleon….There are many great model-personalities. You can always find the right spirit for the brand.”

The book explains that fashion icons “give us what we want, even before we are aware of what it is we want. Such is the irony of branding: that it works silently, nearly invisible, alongside fashion itself, casting a shadow-spell long enough for us to enter into.”