The Rise of the FaceTime Celebrity, Fashion Shoot

Quarantine has led photographers, magazines and brands to shoot virtually.

After shooting her new Harper’s Bazaar cover with Alexi Lubomirski pre-lockdown in February, the singer recently teamed with Los Angeles-based photographer Angelo Kritikos for a very different type of shoot. Unlike the Bazaar production, which would have involved a small army of stylists, hair and makeup professionals, editors and assistants, this one included just two people and took place over FaceTime.

“A few days into the stay home order, I texted Demi my virtual shoot idea and we executed it the next day. We wanted to inspire people to stay home and get creative. Nothing will stop us from creating together,” said Kritikos in an e-mail.

In the mix of color, black-and-white and double-processed images posted on Instagram and TikTok, Lovato strikes a series of poses in a casual graphic back T-shirt paired with large gold hoop earrings.

“I don’t feel any pressure to perfect my virtual shoots because I really love the gritty and raw feel to the images. To me, it’s cool how imperfect the photos turn out,” added Kritikos. “Even though we are not physically in the same space shooting, there is something about the virtual shoots that feel very intimate and vulnerable. There is only so much I can direct when I’m not physically there with them, but that’s what makes the virtual shoots special. It’s a collaborative image.”

His images were just for social media and not sponsored by any companies, but since he posted them, a lot of artists, brands and publications have expressed interest in his virtual shoots.

And he’s not the only one dabbling in this type of photography. Not being able to go out has led a number of photographers, brands and publications to experiment more with virtual photography. Among them is Vogue Italia, which recently published a shoot featuring Bella Hadid, masterminded by photographer Brianna Capozzi and styled by Haley Wollens.

Pre-quarantine, a magazine shoot like this would involve around 15 to 20 people, according to Capozzi, who shot Dazed’s recent Selena Gomez cover. But for this one, it was just Capozzi, Wollens, Hadid and her friend Lauren, with whom she’s staying.

“We’re pretty close with [Bella] and she’s an amazing model which is obvious, so we made her a deck that showed her each pose so she had each image that we were wanting to do. So it was just about her getting into it and she did of course,’ Capozzi said.

Having so few people involved also meant that there were no distractions. “We were doing [the poses] live in the camera and then she was able to mirror us and add her own twist,” she said. “Compared to being on set and I say one thing, the client says another and then the creative director says let’s try that and it’s like which of the three poses is the model trying and you get some weird in between. Because it was so specific and there was no distraction we were really able to just get in the exact poses and get the exact idea across.”

Bustle, the lifestyle site owned by Bustle Digital Group, has also been using FaceTime photography. When it had to cancel a planned shoot with singer JoJo, the photographer Tory Rust suggested to Karen Hibbert, vice president of BDG’s lifestyle arm, that they do it virtually. 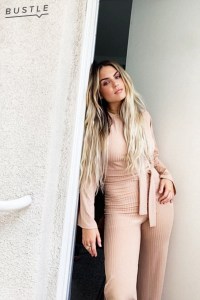 “In the first week [of quarantine] everyone was scrambling figuring out how are we going to make content and I was sitting at home like how am I going to stay sane and continue to create instead of just watching Netflix,” Rust said. “I just had this need to make something so I was like, ‘f–k it, I’m going to try this video shoot thing.’ I got a few models that I worked with in human form to be down to test it out,” she continued.

Once she got the hang of it, she approached Bustle and not only did they like the idea for JoJo, but they also asked Rust to shoot Shailene Woodley virtually. 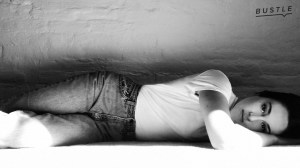 For both, Hibbert virtually zoomed in on Rust’s FaceTime screen and messaged her any art direction, while Jojo’s mom stepped in as a last-minute camera assistant, holding the singer’s phone and adjusting it on request. JoJo did a virtual makeup tutorial with a makeup artist beforehand, while Woodley’s look was more fresh-faced.

“It’s a challenge, but I kind of always love those challenges,” Hibbert said of working out how to produce images during quarantine. “It’s kind of not treating the times differently.”

It’s understood that while American Vogue hasn’t experimented with FaceTime photography, it’s something editors are exploring for future issues.

Brands are getting in on the action too. Earlier this week, Jacquemus released its Spring 2020 campaign entirely shot over FaceTime by Pierre-Ange Carlotti and starring Bella Hadid, who’s becoming quite the expert at this kind of photography.

But it’s not just FaceTime that photographers are experimenting with from the safety of their homes. Nick Knight recently told WWD that rather than canceling or postponing, he’s shifting to different formats, shooting campaigns on Zoom, Skype or using 3-D scanning.

“They ask me for campaigns that can be seen across the Internet, and you can create beautiful images even through tools like Zoom or Skype,” he said. “The “resolution” of an image shouldn’t define what is acceptable, we need to re-evaluate what an acceptable image is. The challenge is to create beautiful, elevated images taken even for instance during video calls with the models.”

At The Face, editors have been experimenting with Zoom, recently releasing an interview with the cast of HBO’s “Betty” shot entirely on the meeting app. They’re also changing the video format of its regular Revelations feature, where they ask celebrities revealing questions, to use the app’s virtual backgrounds instead of a studio.

Matthew Whitehouse, deputy editor of The Face, said: “Having to come up with solutions has forced us to be more inventive — trying things we perhaps ordinarily wouldn’t, to what’s been a really positive response from our audience.”

It doesn’t work for everyone, though. People editor in chief Dan Wakeford told WWD that the magazine experimented with doing shoots with photographers via FaceTime and Zoom, but the resolution of the images wasn’t large enough to use for the full-page portraits the magazine needs.

“We are doing socially distanced photo shoots with celebrities and give direction to subjects via FaceTime,” he said.

As for what this could mean for the future of photography post-quarantine, Kritikos thinks it will lead to more virtual creation. “The quarantine is pushing people to become innovative with the ways they create and collaborate,” he said. “Even when the stay-at-home order is lifted and things slowly start getting back to ‘normal,’ shooting virtually will still be a way for me to work with people that don’t have access to flying out to L.A. I feel there will be a big movement in virtual creation.”

But while Capozzi would like smaller shoots in some instances, she’s not so sure that will happen. “I think human nature will go right back to the way that they were but that’s a cynical way of looking at it.

The New Normal for Fashion, Celebrity Shoots at Hearst Magazines