To commemorate its 15th anniversary and 90th issue, The Fader is putting a spotlight on influencers born in the Nineties. 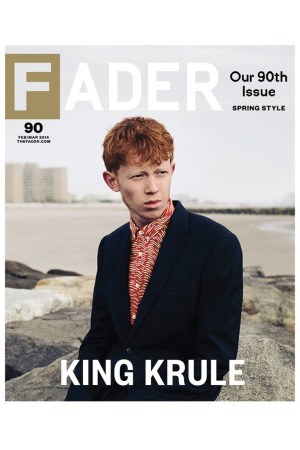 THE FADER’S ROOKIE TEAM: To commemorate its 15th anniversary and 90th issue, The Fader magazine is putting a spotlight on influencers born in the Nineties. The concept might not be novel, but as part of the issue, which goes on sale on March 4, Fader has tapped Tavi Gevinson and her editorial team at Rookiemag.com, to “take over” sections of The Fader. “There are all these cultural elephants in the room and Tavi was one of them,” said Fader editor in chief Matthew Schnipper. “Our question is how do we talk about Tavi when a lot of people already have. I like Rookie a lot and I thought, why don’t we just work with them?”

This story first appeared in the February 11, 2014 issue of WWD. Subscribe Today.

Although Schnipper admitted that neither he nor his team worked directly with Gevinson — “I think she’s applying to college,” he noted — he did work with Rookie’s staff, who got the OK from their young editor before sending their edited pages along.

As a result, Team Rookie took over 10 pages of the 128-page magazine, working on front-of-book stories and the style section, among others.

Schnipper highlighted a Rookie takeover section dubbed “Why Can’t I be you?” in which editors interviewed journalist Lara Setrakian, who started a news service in Syria. Although Fader is music-centric, Rookie infused some fashion into the issue with the inclusion of a one-page feature on the mood board inspiration of British brand Meadham Kirchhoff.

In addition to a handful of Rookie-created sections — all of which will be accessible Thursday on TheFader.com — the spring issue includes stories on a smattering of well-known Nineties kids such as Justin Bieber. It also showcases interviews with lesser-known wunderkind, such as a rapper named Young Thug and musician called King Krule, both of whom appear on the issue’s cover.

“Our message is that we want to get you everything that is fresh,” Schnipper said of his publication’s mission. “There’s nothing I like better than someone who is reinventing themselves, but for this issue it was for someone who is young.”