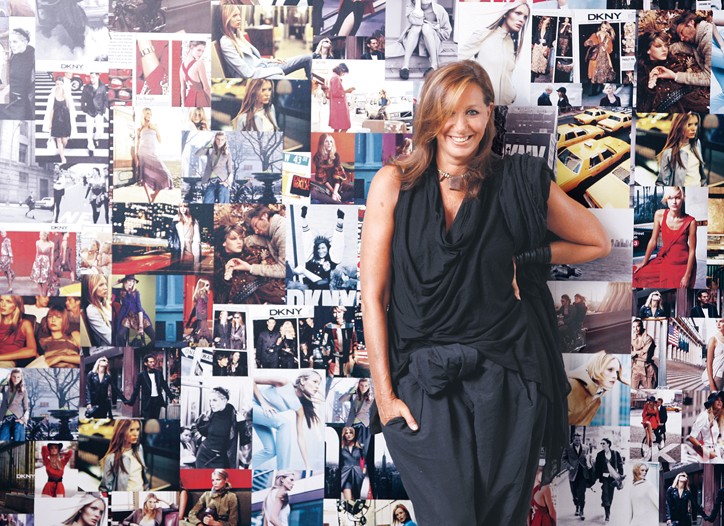 When it comes to critiquing the fashion system, Donna Karan’s cries for re-evaluation have often felt like wails in the wilderness. Now, as the recession has changed the way women buy clothes, Karan seems to have been right on the matter of deliveries. Thinking it’s possible to “turn down the volume” on shows may be another matter all together.

You have long been critical of excessive consumer coverage of the shows. Now, designers are live-streaming for all to see.
What I think we’ve got to do is lower the volume on the press shows. We still have to present the seasons, as we do for resort and pre-fall; we’ve got to talk to long-lead retailing. What is the point of these large bells and whistles shows for the stores? What do they get out of it if they’ve already bought — like DKNY, they’ve already bought the collection. Why are we showing after they’ve already bought? The show is being used as content material to communicate to the consumer, but why do we need to blast out five months in advance rather than when it goes into the store? You go into the store now and you’re in culture shock. “What am I seeing at retail, because I’ve just seen all of this other stuff?” People then want to wear that immediately.

If it were your call, what would you do?
What has to happen, we should not be shipping fall clothes until July. There has to be, I hate to say it, somebody’s got to take the leap of faith and deal with the June, July market. Pre-fall shouldn’t exist, I’m sorry. Wrong. Let’s start there. We’ve got to bring clothes into season. Everybody has asked for resort to be wear-now. What they’re really asking for is for a fresh approach to fall. What sold best in our resort collection were all our cashmeres. The number-one selling piece at retail right now is of the season. Cashmere. Pre-fall? May is when summer starts. This is where the problem is.

What would be the ideal system?
Ideally, quietly show to long-lead. You don’t need a show show. Do the same thing you are doing with pre-fall and resort. You have to go according to the discipline of when you have to buy fabrics and when you have to do production. That presentation has to be made pre-season because the designers need the production time. That’s the reality of our business, it’s according to a calendar. That’s where it all starts.

Then we get into delivery: When should delivery go into the stores? My philosophy is that we don’t need pre-fall and fall. We need one fall. That starts in August, and you don’t do markdowns until after Christmas, the way it used to be. Don’t go into the holiday season on sale. It’s the biggest disaster. Make everything feel fresh; you don’t buy Christmas presents on sale. There are two sale times during the year, February and July. Now, every five weeks you can buy on sale.

What happens to resort?
Resort? I believe there should be a separate going-away area in each store. Take a part of a store and create that energy. But don’t make the whole store into shorts and sandals when it’s snowing out. The consumer already told me that doesn’t work because the most successful product we did for resort are cashmere sweaters — wear-now.

How would you handle spring?
February is the August [of spring], and then March is when you start to think about the spring clothes. That’s the problem with spring. Resort screwed up spring. And then pre-fall screwed up spring. Everything screwed spring up. Spring got sort of caged out. I’m saying to reinvent spring again, reinvent fall again, reinvent the season we’re designing for.

If you don’t have pre-fall, what gets you from May to July?
Summer.

You said you would show spring and fall in low-key presentations to retailers and long-lead press.
You want to do great shows? Do consumer shows. Talk to the consumers; that’s what the Web is about, it’s consumer-retailer. How that works, that is a major look-at. How do we do that? Is it viral marketing? Who gets to see the show? Its purpose — what are these shows all about?

The communication system is not going to stop; people are not going to stop live-streaming shows.
That’s why we have rethink how we show. The whole thing makes no sense. Period. End of report.

If I look at my own resort collection, what were the best-selling things? Cashmere. The customer says, “It’s cold out, warm me up. I am hot, cool me off.”

See all the looks from recent Donna Karan collections: