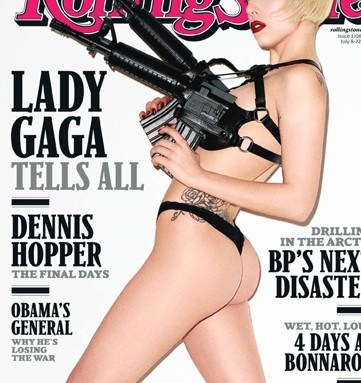 THE LADY’S A WINNER: Put Lady Gaga in anything — flesh-colored bra, black bustier, meat dress, artillery-undie extravaganza — and it doesn’t matter. She sells. According to the Audit Bureau of Circulations, Gaga was the runaway hit at the newsstand in 2010 for monthly and biweekly magazines. The results don’t extend all the way through the end of the year, and they do vary (figures for Condé Nast titles go through November; Hearst titles through October). But it’s safe to say no celebrity will catch up in time to match Gaga’s strong and steady performance throughout the year.

Through the end of September, machine-gun-wielding Gaga’s July 8 cover for Rolling Stone was the top-selling issue of the year for the magazine, with 245,000 copies sold, a total that is nearly three times better than its 2010 average. (It didn’t hurt that it was the same issue with the big Stanley McChrystal profile, one of the most explosive magazine pieces of the year.) For Cosmopolitan’s April issue, the Gaga cover sold 1.7 million copies, the top seller through the end of October. The Gaga September Vanity Fair issue sold 450,000 copies, the title’s second-best seller of the year (behind only Angelina Jolie) through November, and more than 80,000 better than its average. Gaga on the January issue of Elle was the magazine’s third-best seller of the year through October. And if rumors on the Web are to be believed — that Gaga will grace the cover of Vogue in March — Anna Wintour has plenty of reasons to rest easy.

Who else did well? Rihanna’s January GQ cover was the second-best seller of the year through November for the men’s monthly, and her August Seventeen cover was the Hearst’s title’s top seller through the end of October. But unlike Gaga, who dominated whatever biweekly or monthly magazine she graced, Rihanna on the July Elle cover sold 285,000 copies, slightly below average for the Hachette monthly.

For every Gaga, though, there’s a Taylor Swift. Barring a late turnaround, Swift had the year’s poorest results. Her April Elle cover was its worst seller of the year through October, with sales running 60,000 less than the average on the newsstand; her November cover for Glamour was the second-worst-selling for the monthly, and her July Marie Claire cover was the third-worst-selling issue for that monthly through October.

But there is a chance for a turnaround, and it certainly would not be without precedent.

“Gossip Girl” star Blake Lively had the dubious achievement of being on the cover of the worst-selling issue of Esquire through October, and her June Vogue cover was its third-worst seller for the year. But just as it seemed Lively couldn’t sell, her October Allure cover sold 196,000 copies, which is by far that magazine’s best seller of 2010. This isn’t the only time Allure has come to the rescue. Jennifer Lopez was sacked with second-worst seller of Elle through October, but had the second-best cover at Glamour and the second-best seller at Allure. Perhaps Allure and Seventeen — presumably where Swift’s fan base lives a bit more than at Elle — can help turn her fortunes around as well. She’s on Allure’s December cover, Seventeen’s January one and a December issue of Entertainment Weekly.

Other topsy-turvy cover girls in 2010 include Jessica Simpson, who managed to land the best-selling cover for Lucky through the month of November and the worst-selling cover for Marie Claire through October. (On the Marie Claire cover, Simpson didn’t wear makeup and said, “I don’t have anything to prove anymore. What other people think of me is not my business.” Evidently that doesn’t make for good business.) Lauren Conrad, whose September cover for Glamour was the best-seller of the year for editor in chief Cindi Leive, also managed to have the second-worst selling cover for Seventeen. And Anne Hathaway’s November cover for Vogue was a bomb — its second-worst seller at the newsstand — but her cover for InStyle was its second-best performer of the year.

So what’s the moral of this story? Play it safe and book Lady Gaga for a shoot immediately.

UPTOWN GUY: Society glossy Avenue has tapped Peter Davis as its new editor for both the monthly print publication and the just-launched Avenueinsider.com Web site. Davis succeeds Janet Allon, who stepped down to spend more time with her family, said Julie Dannenberg, president of Avenue Media, which is a division of Manhattan Media LLC.

“Peter was made for this job. He has his finger on the pulse of everything that’s happening in New York,” said Dannenberg.

Davis was previously features director of IMG’s The Daily and has written freelance stories for a range of titles, including Vogue, Vanity Fair, Interview and The New York Times. He was born and bred on New York’s Upper East Side — Avenue’s home base — and was educated at Buckley, Pomfret and Bennington College. His half-sister is designer Minnie Mortimer and he counts Tinsley Mortimer as an ex-sister-in-law.

Avenue has a controlled circulation of 38,000 and is distributed primarily to residents of the wealthy Manhattan corridor from 57th Street to 97th Street, between Fifth Avenue and Lexington Avenue. Additional pockets of affluence on lower Fifth Avenue, in TriBeCa and on Central Park West make the cut, as well.

Avenue suffered an advertising fall-off during the recession, but page counts have bounced back to 2007 levels, said Dannenberg, who cited Chanel, Graff, David Yurman, Cartier and the city’s high-end real estate brokerage firms as key advertisers.

“We want to refresh Avenue and reach a younger audience, without alienating the existing, older reader,” said Davis. “We are going to be doing a lot with Avenueinsider.com, which soft-launched a couple months ago, and make it very interactive.”