Chris Hughes is remaking himself as the last best hope for journalism's old-school values. 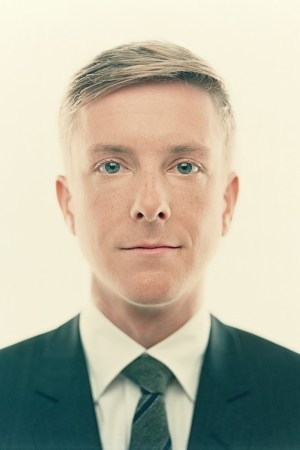 Chris Hughes is slim and short. He has a cute face.

On the hot August morning when I meet him at The New Republic’s temporary offices on K Street in Washington, D.C., he is wearing a blue gingham shirt tucked into unwrinkled blue jeans, and not a strand of his blond hair is out of place. At 28, he looks something like a child star who’s aging well.

His Facebook cofounders dubbed him “the Empath,” and I can see why when he offers me something from his mini fridge. He even fetches it himself—an FRS Healthy Protein shake, orange cream flavor. Nothing in his appearance suggests he is worth an estimated $850 million.

While his onetime roommate, Mark Zuckerberg, was known as the grumpy genius behind the social network, Hughes functioned as Facebook’s polite and presentable front man. So when he purchased a majority stake in The New Republic this past March, it didn’t put much of a scare into anyone.

That changed in May, when he showed he wasn’t going to play nice. First, he surprised his staff members and interested onlookers by dumping New Republic editor Richard Just and replacing him with Franklin Foer, who had run the magazine from 2006 to 2010. Then he gave Foer the go-ahead (and the cash) to court big names—Dexter Filkins and Jane Mayer of The New Yorker, Hanna Rosin of The Atlantic, as well as Robert Draper and Mark Leibovich of The New York Times.

At the Times, the reaction to the wooing of Leibovich was dismissive. “Why would he go?” a source told me. “It’s just a small operation.” But genuine concern set in when word leaked out that Foer was offering Leibovich “an outlandish amount of money.” Richard Berke, a Times assistant managing editor, “bent over backwards,” a source says, to assemble a package meant to keep Leibovich from jumping. It included a salary bump and a new post as chief national correspondent at The New York Times Magazine. Leibovich ended up staying, as did most of the others wined and dined by The New Republic, but his employers had learned that Hughes wasn’t fooling around.

“That’s a good thing, to be competing with the Times,” Hughes says. “I think reporters and editors and advertisers, people are watching closely.” Underfunded and little-read for years, The New Republic needs someone with Hughes’ resources. In a few months, he has roughly doubled the size of the staff, to 51, and has spent gobs on a redesign scheduled to debut in January, courtesy of rock-star design firm Pentagram and Dirk Barnett, the creative director Hughes has poached from Newsweek. The new owner has also enlisted, as the magazine’s chief operating officer, Sloan Eddleston, a former consultant at Bain & Co., to boost circulation, which has fallen to 35,000, according to in-house figures. Of all the big-name writers courted by Hughes and Foer, only Walter Kirn said yes. The acerbic novelist and critic—known within the industry for his ability to bang out fully formed, energetic pieces on tight deadlines—quit GQ four months into a contributing editor’s contract to sign on as The New Republic’s national correspondent. Other hires made less of a noise but may prove more valuable in the long run—young writers Noreen Malone, Sarah Goldstein and Marc Tracy.

Hughes grew up the son of a paper salesman (dad) and a high-school teacher (Mom) in Hickory, N.C., a furniture-manufacturing town of 40,000 with its own minor-league baseball team. He didn’t stick around, deciding, like a youthful hero out of Stendhal, to pole-vault himself away from the hinterlands toward a place that would give him a way into the big time: Phillips Academy in Andover, Mass.

The decision to leave Yourtown, USA, for an elite boarding school, where he was a financial-aid kid, came as a surprise to his parents. “It was a little sad, because we Southern people don’t send our children away to school very much,” his mother, Brenda, told the Hickory Daily Record. “That’s what he wanted to do.”

In 2004, he found himself a scholarship student residing at Harvard’s Kirkland House, where his roomie was starting something called TheFacebook.com. Hughes was user number five. With no engineering background, he played the role of sounding board. Zuckerberg and chief technology officer Dustin Moskovitz “looked up to him for his general good judgment on features,” says David Kirkpatrick, author of    The Facebook Effect (Simon & Schuster, 2010). As an original team member, Hughes owns one percent of the company, which may not sound like much, but that is what translates into the $850 million or so that is fueling his latest power move.

After leaving Harvard, he went from one historical juggernaut (Facebook) to another (the Obama campaign), where he ended up in charge of the candidate’s social-media department. Was he gifted or did he just have a knack for positioning himself in the best spot to ride the next wave? This is a question Hughes put to the test in 2010, when he started a digital entity called Jumo.

It got a splashy $3.5 million launch—and a story on the front of the Times business section, which led to the swamping of the Jumo servers. Meant to serve as a bridge between nonprofits and potential donors, the site was glitchy and hard to use—PayPal wasn’t even an option for donations. Its do-goodism was also naïve, in retrospect: It seems that Hughes assumed all it would take to spur activism was the click of a “Care” button. Only 150,000 Samaritans and 14,000 charities signed up for the service. Less than a year in, Hughes sold Jumo for $62,221. Included in the deal were five MacBook Pros worth about $8,000.
“Nobody had a vision for what this thing was going to be,” a former Jumo staff member tells me. “Everything was getting hammered out by committee.”

In the fall of 2011, Hughes was having lunch with Just when he heard the magazine was coming up for sale. It must have seemed an unsexy proposition. Budget cuts in 2009 reduced circulation to such a degree that it had about as many readers as the Grand Forks Herald. And the idea of getting into the print business would place Hughes in the position of swimming against the tide rather than going with it, as he had with Facebook and Obama.

When asked to spell out why he bought it, he says, “I was the news director of my high-school newspaper. When we started Facebook in my sophomore year, my life took a different turn. Journalism and media stayed an interest, but I ended up working in the technology and political world for much longer. In some ways, coming back to this world feels like a little bit of a homecoming, because it’s the world of ideas. It’s the world of research, it’s a world of journalism and it’s a world that pursues truth and a deeper understanding of how our world works.”

The magazine’s driving force in recent decades has been Martin Peretz, a publisher, editor and public intellectual who counted Al Gore among the students he taught while serving as a lecturer at Harvard. He held a majority stake in The New Republic from 1974 to 2002, when he began to sell it off in pieces. In 2009, Peretz and former investment banker Laurence Grafstein, along with other investors in a new ownership group registered as TNR II, purchased back the shares of the magazine then owned by CanWest, a Canadian corporation. By the end of 2011, they needed to punch in more cash themselves or find a major investor. A number of suitors—Bloomberg LP, the Atlantic Monthly Group, News Corp.—publicly turned them down. Like Hughes, Peretz is a striver who came from humble means—in his case, the Jewish, working-class Bronx—and landed at Harvard (where he earned a Ph.D.). But Peretz married into his money and used that fortune to purchase the magazine. For the next three decades, he sounded off on American Zionism, Palestine and the Iraq war (he supported it) in the journal’s razor-thin pages.

Hughes is the anti-Peretz, in many ways. He is in check and on message. He is a model assimilated gay man: wholesome, family-friendly, married to Sean Eldridge, his college sweetheart. The couple does not summer on Fire Island. “We spend the summers upstate,” Hughes says. “I think I’ve been to the Hamptons twice, once for a wedding.”

While his thoughts are constantly with his publication, his body is not always there: Hughes commutes, via Acela, between New York (SoHo and Garrison) and Washington.

Since 2010, he and his husband have raised nearly $240,000 for Democratic politicians, PACs and party committees, according to the Center for Responsive Politics. The donations have paid off in advancing causes that interest him personally—gay marriage, for one. Also campaign finance reform and AIDS research. The magazine affords him a new credibility to go along with his newfound wealth.

“When you have that kind of money, you can immediately jump to the front of the class in terms of influence,” Kirkpatrick says. “A publication only accentuates that. He is clearly interested in making an impact.”

Foer doesn’t see the magazine being used as its owner’s personal soapbox, but it will reflect Hughes’ ambitions. “There’s no doubt that he wants to shape the dialogue,” Foer says. “He has an incredibly idealistic sense of what journalism can accomplish. It’s a very high-minded idea about how debate can be fostered and pushed forward.”

Hughes, who has taken on the titles editor in chief and publisher of The New Republic, uses the phrase “convening conversations” to describe what he’s after. “The measure that we have for our own success in the journalism world is how often are we publishing big ideas, serious journalism that convenes a debate in American discourse,” he says.

That sounds nice. It is also far from the pugnacity that characterized the magazine in its heyday, when it was run by Michael Kinsley and Hendrik Hertzberg and functioned as a delightfully contrarian pain in the ass. Even the back of the book—then and now, a place where Leon Wieseltier throws punches and settles scores (see his recent takedown of David Remnick’s New Yorker profile of Bruce Springsteen)—had real bite. “The great feud between Leon and Charles Krauthammer set the tone for the office,” recalls Jacob Weisberg, a one-time New Republic intern, who is now the editor of Slate. “It was a very animated place, incendiary and troublemaking.”

Aside from the question of how hard Hughes and Foer are willing to punch, another big unknown—how the magazine will slot itself into digital culture—hangs heavy over their heads. Magazines everywhere are folding, and even serious-minded digital entities are trying to figure out how to squeeze out a profit in an environment that favors BuzzFeed LOLs and OMGs, not to mention HuffPo nip slips. Adding to the challenge is the fact that nothing in The New Republic’s DNA suggests it will thrive on the Web.

The editor, for his part, is glad to have a Facebook alumnus at his side: “Any magazine in America would be psyched to have a guy like him thinking through the big discussions,” Foer says.

Hughes himself doesn’t pretend that the shifting media environment has not stumped even him, “The Kid Who Made Obama President,” as Fast Company once called him. “I wish I had a magic silver bullet that no one else in the media world has thought of,” he says. “We don’t. It’s going to be a long game.”

Luckily for The New Republic, he can afford to wait it out.