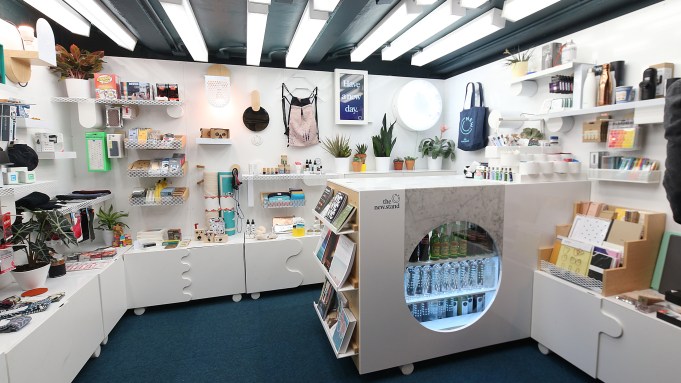 NEW YORK — What does the newsstand of today look like?

According to Lex Kendall, Andrew Deitchman, David Carson and George Alan, the founders of The New Stand, it works with an app and is stocked with a selected assortment of print titles and Matcha-flavored Kit Kats.

That’s the abridged description of The New Stand concept, which opens here today at the Union Square subway station and is appropriately located near the L train. Another shop will open in Brookfield Place this Friday.

According to Kendall, the chief operating officer who cofounded Evolve Electric Motorcycles and has consulted for Made Fashion Week, The New Stand is a “day improvement company” that’s attempting to revive a slow-to-change retail model.

“We have some of the most sophisticated consumers and retail in New York City and we sort of looked at the newsstand and thought ‘Why hasn’t that been upgraded?’” said Kendall. “It’s sort of a time capsule. Above ground all of these things have changed and down here it’s kind of frozen in time.”

The New Stand team is switching things up by offering essentials someone would find in a high-brow convenient store — protein bars, pressed juice and toothbrushes — along with unexpected products including Instax cameras, Saturdays scarves and mini selfie sticks. A selection of daily newspapers and weekly magazines ranging from Surface to Time are available in the store.

The New Stand experience also includes a free app, named The New Stand, which is available on iTunes and Google Play. The app aggregates content from the Web daily and offers musical playlists throughout the week. Carson, the chief marketing officer who founded Heavy.com, said The New Stand will focus on pushing articles that highlight new things or ideas and the editorial team will start producing more original stories down the line.

Once customers download the app, they become a member of The New Stand and receive daily deals, called High Fives, which incentivize them to visit the store and purchase product. For the first week, members can buy a box of Sir Richard’s natural condoms for $3 instead of $5. Customers can redeem the deal and purchase other items by using their member card bar code within the app, which can be linked to Apple Pay, Google Wallet or their credit card. These offers will change often, as will the product, which is displayed on movable magnetic fixtures.

“The idea is to get people into our ecosystem every day and make The New Stand a part of their journey. We want to be a utility and service to the commuter,” said Kendall.

Within the store there are screens that currently post promotions and an entrancing video of a hula dancer, but down the line these screens will serve as a platform for brands. Deitchman, The New Stand’s chief executive officer who founded advertising agency Mother New York, told WWD an activation with eBay will roll out in the next couple weeks along with a partnership with Time magazine.

In addition to selling Time at its shops and integrating its stories into its app, The New Stand will extend Time’s content into a physical environment. Deitchman wouldn’t reveal the commercial terms of the deal, but he likened the relationship to Supreme, a streetwear brand, collaborating with legacy brands such as Brooks Brothers or Levi’s.

“From a media perspective we are thinking ‘What do we create with Time that no one has ever done before?’” said Deitchman, who projects that 50 percent of The New Stand’s revenue will come from product sales and the other 50 percent will come from marketing partnerships.

“I love the creative, entrepreneurial thinking behind The New Stand,” said Meredith Long, Time’s publisher. “We’re always looking for similar ways to disrupt our own business, and since Time has always been a staple of the traditional newsstand, it was a natural fit to partner with this exciting new venture. We want to reach consumers wherever they want to consume news and The New Stand offers an exciting new venue for us.”

Deitchman told WWD that these advertising partnerships also allow The New Stand to offer its customers special moments (he hypothetically mentioned handing out free umbrellas on a rainy day) and more affordable products including a pressed juice that’s $7.50 instead of $12.

Kendall said its larger Brookfield Place space, which sits in the Winter Garden, will lend itself to collaborations with fashion and beauty brands including Saturdays, Stowaway cosmetics, Rochambeau, Isaora and Freedom Of Animals.

“A lot of these young designers want a foothold in Brookfield Place and we are able to offer that,” said Kendall.

They plan to expand the concept, which has been funded by investors in the real estate, tech and finance communities, across New York City and are in talks with the MTA about a shop in the 47-50th Streets subway station. Deitchman implied that its current relationship with Brookfield Place, which is owned by Brookfield Office Properties, could create other opportunities. The founders are also considering Fulton Center Mall, airports, office buildings and even locations outside of New York.

Alan, The New Stand’s creative director and founder of Playland Motel, added that app members will be able to use their membership at every location.

“As a New Yorker if you go from Rock Center through Union Square and to Brookfield, you start to be exposed to different things in different New Stand stores,” said Alan. “If you expand that beyond the walls of New York City and go to JFK let’s say, The New Stand starts to enhance that journey and add value to all of those different locations.”