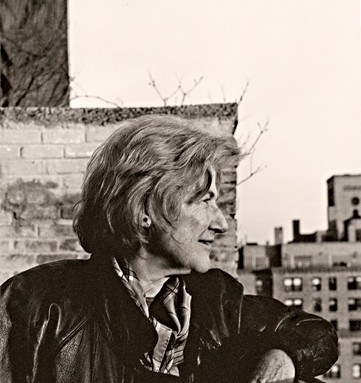 Mary Ann Caws is a distinguished professor in the graduate school of the City University of New York, teaching in three departments: English, French and Comparative Literature. She has published more than 50 books on subjects ranging from Picasso to Virginia Wolf. But perhaps she is most widely known for her translations—her Surrealist Love Poems proved a mini bestseller—and many major books on surrealism.

Once, at a talk at La Maison Française in New York, she was asked what had drawn her to surrealism. We were waiting for a complex, intellectual answer on the role of automatic writing, of dream imagery, of the life of the unconscious. She turned to the slide on the screen behind her of a small group of surrealists in their Twenties heyday and pointed to André Breton: “Look at that face,” she said smiling. A most surrealist reply with a hint of Dada, but also a response from the heart: Mary Ann Caws loves beauty, loves life.

Nowhere is that love better expressed than in her new book, Provencal Cooking: Savoring the Simple Life in France. For more than half her life she has spent her summers in Provence, France—the Vaucluse, especially—where she lives in a little house she renovated stone by stone over many years. Provencal Cooking describes those years of struggling to turn a shack without running water and electricity into a home for herself and her two children.

One might say that we have already read that book elsewhere— A Year in Provence, say, with its charming record of the tribulations of house renovation in a land of xenophobic locals hardened to the wants of outsiders. Caws’ book tells that story beautifully, but more, and to its core, Provencal Cooking is a book of lingering meals and the love that went into making them, a book of sustained friendships, especially with the great Provencal poet René Char—her guide in the ways and customs of Provence and whose translator she eventually became. Hers is a book about a profound love of place: a region arid, hot, waterless, craggy, but rich with fields of wild flowers and lavender and steeped in tradition and antiquity still alive in the Roman ruins and stone walls half buried in the soil.

The book’s subtitle, Savoring the Simple Life in France, announces fully the theme that weaves through her account of daily life. Each page is a savoring of life, pointing out to us by implication that moments of beauty, of quiet joy, are everywhere, if only we slow down our pace and open our eyes to the exotic nature of the ordinary. Caws turns the simple and often dull activity of shopping for food into a ritual of small wonders. She goes to the same market and to the same right fishmonger to discuss the correct fish for dinner that evening. This takes time and consideration, and broaches many topics other than the piscatorial, as does the discussion with the right merchant in another village of the proper local wine to accompany the fish.

At times, she makes long detours to other villages and markets in the hunt for the perfect melon. “Nothing in the world puts you in a better mood, if you are French, than going a long way to get a small, perfect thing,” Caws observes. Everything in its place, everything in its time. It’s a tightly knit world where lunch with neighbors might last all afternoon and evening, and then extend, after a nap, to a dessert hour later at 10 p.m.

It took years for her neighbors to accept her and her children as belonging, like the seasons, in the rhythm of their life and to share with her their traditional family recipes, 40 pages of which conclude this book. When Caws is not gardening, drawing water from a place not too near, reading, translating, repairing a beam or a window, she is making meals for her family and friends—the simplest of dinners exciting our appetites: “We are having my poulet a l’estragon, this chicken I have baked with the tarragon I have grown upstairs, a bit of ham and a whole onion in its crevasses, surrounded with tiny irregular potatoes to soak up the juice and the splash of olive oil I added for the flavor.”

Part of the pleasure of this slender but rich book is the charm and honesty of its prose, the simplicity and unadorned eloquence of Caws’ voice sharing with us her love for the little patch of home and its environs. For all her quotidian duties, the seemingly endless work of obtaining and preparing and cooking a meal, the negotiating of narrow roads and hilly climbs by bike or by an old midget car to carry water to the house, there are meditative moments in the beauty of the commonplace: “Outside, against the wall, is a rough stone basin from which the horse used to drink. Over it hangs a grapevine. The grapes ripen at the end of the summer, growing more purple by the day. A large table is placed in the field here, among the grasses and the wild flowers, where you can sit looking at the cherry trees at the end of the field, observe the way the light changes, from the sunshine of early morning to the late darkness lit only by stars.” Amen.

THE PROVENCAL WAY
Figs and White Cheese
“Here, the purple green of the figs (well, I do have a fig tree, and they are greenish-purple, and I pick them the first thing in the morning before the ants get to them…). In any case the color of the figs and the white of the cheese set each other off to perfection, sugared or not, cut up or whole. If you happen to have some green almonds available, put a little dish of them alongside and let each person remove the kernels while eating. The combination is unbeatable.”
—Reprinted with permission from Provencal Cooking