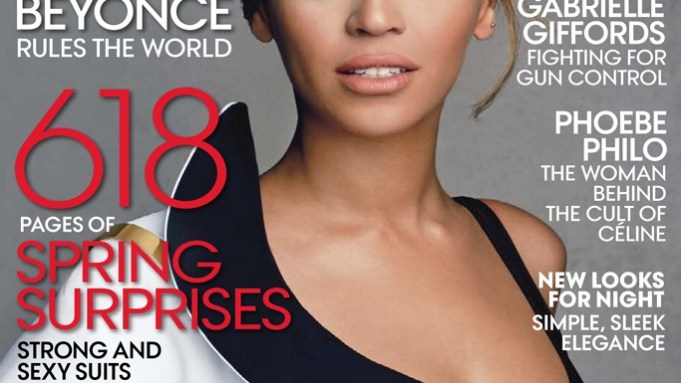 THE QUICK AND THE DEAD: George Lois was at his office recently when he saw the September issue of Vanity Fair, and the legendary magazine designer had a reaction that will seem familiar to a lot of people. “It is true when I opened the magazine I wondered what dead person was on the cover this month,” he said.

It’s Princess Diana. The magazine pulls the dead person trick so frequently the latest cover was greeted with a chorus of derision from some corners of the Internet. Gawker called it out of touch.

Diana had already been beaten there by Audrey Hepburn, who appeared on the cover in May. In June 2012, Marilyn Monroe was trotted out yet again to commemorate the 50th anniversary of her death. The year the most dead celebrities appeared on Vanity Fair’s cover was 2010, when Grace Kelly, Elizabeth Taylor, and Marilyn, again, all did so. The Kennedys practically deserve posthumous contributing editor credits for the number of appearances they’ve notched over the years.

Unfortunately for Lois, Gawker, and anyone who scoffs at these periodic resurrections, they are not going to stop anytime soon. That’s because dead people on magazine covers is what America wants. Just look at the newsstand numbers.

Vanity Fair’s bestseller so far this year? It was that young ingenue Hepburn — 308,000 copies, including digital replicas, almost 100,000 more than the worst-seller, Taylor Swift in April, who sold a little more than 211,000 copies, according to the Alliance for Audited Media.

Nor is Vanity Fair alone in spotlighting the deceased. Town & Country does these covers too — Ronald Reagan was riding into the sunset next to his still living widow Nancy in November. But more often editor in chief Jay Fielden prefers once megasuccessful, now fading living legends — Lauren Hutton, Gloria Vanderbilt and Ali MacGraw are recent pin-ups.

The obsession with dead celebrities is not unlike Hollywood’s attempt to revive faded brands, like “The Lone Ranger.” There’s the expectation they still have some juice left, and the public is more likely to respond to them than a new face.

Fielden said his choices are motivated by the continued fascination of the public with subjects who may be past their prime or are long dead.

“We love dead people,” Fielden said. “It’s part of all of our lives, so why should magazines be lassoed to some sort of rule that doesn’t apply to other parts of our lives? What genre of books is most popular? Biographies. And those are often about dead people.”

Newsstand sales bear him out. During a month crowded by relevant political news stories, Fielden misfired with the Reagans, which sold below average, but Hutton turns out to have been a prescient choice — she’s so far the year’s best performer, selling 44,343 copies in June, a typically soft month, and was a bigger draw than April’s Allison Williams of “Girls” by almost 7,000 copies.

The figures are why Fielden is sticking to the formula. “We want to do it when it’s an opportune moment. We’re not the only ones thinking about the 50th anniversary of Kennedy’s death in November,” Fielden said.

Face it, magazine circulation needs all the help it can get: Newsstand sales for the first half of the year declined by 10 percent, according to figures released last week. The numbers show that editors would be wise to stick by a few operating principles: sex sells, three celebrities are better than one and Beyoncé trumps everyone, even the First Lady of the United States.

Vogue styled Beyoncé looking so regal for its March cover, she outsold an exclusive interview in April with Michelle Obama, 355,397 to 293,798, a difference of about 60,000 copies, digital replicas included.

Elsewhere, magazines scrambled to provoke with lesser deities. The first-half numbers are a testament to the undying power of sex appeal. Cute Miley Cyrus, trying to break out from the tween pop star mold, donned a revealing white pantsuit on Cosmopolitan’s March cover and sold 1,090,018 copies, the magazine’s second-bestseller. Number one? Kim Kardashian, in a push-up top, in the April issue, smiling beside an enormous headline, “The Sex Move.”

The worst seller was the television actress Rachel Bilson (918,706). Miley’s chaste rival, Selena Gomez was InStyle’s worst seller (375,790, 15 percent below the six-month average). Swift’s track record continues to be mixed. She may have bombed on Vanity Fair but in March, she gave Elle its best numbers, 215,949 copies, 66,000 more than the magazine’s worst seller, Jessica Biel in January.

Nicki Minaj is indisputably newsstand poison. Appearing on the April cover of Elle and in Teen Vogue in June-July, she sold the second fewest number of copies for both. Teen Vogue’s readers prefer male matinee idols — One Direction last year, and Justin Bieber in May (104,018).

Glamour’s readers lapped up a nearly topless Kate Hudson in April (323,810), followed by January’s Anne Hathaway (306,428). The teenage actress Dakota Fanning, doing her best Baby Jane impression, flopped in March, the second most important issue of the year, with just 289,205, 4 percent below the six-month average.

Showing some skin also worked for Marie Claire, whose number-one seller in April featured the film actress Olivia Wilde in a translucent, powder-blue blouse. Heidi Klum, on the other hand, sold the least, 119,625. Harper’s Bazaar recruited a familiar face for March, Drew Barrymore, who topped the first half with 130,095 copies sold, to Jennifer Lopez’s low of 105,657 in February.

In these trying times when you can’t count on one celebrity to sell magazines, some doubled — or tripled — up. Vanity Fair’s second-bestseller was in March, which featured Ben Affleck, Emma Stone and Bradley Cooper (274,987). The trio of Michelle Williams, Rachel Weisz and Mila Kunis performed best for InStyle, selling 585,282. Kunis was also Allure’s bestseller in March (140,696). W got it right by sending to newsstands three separate covers in March featuring Kate Moss, Natalia Vodianova and Lara Stone, their bestseller so far this year.

What does Lois, a design legend who created some of the most iconic covers ever, make of the latest trends? Dead people covers are not necessarily lazy, he said. Two of the best ones he ever designed fall under that category — one from 1964 featured a hand wiping a tear from a photo of John F. Kennedy, another, from 1968, was a triptych of Kennedy, his brother Robert, and Martin Luther King Jr. But this is a different time and magazines are under more intense commercial pressures.

“My covers all had ideas to them. Nobody’s covers basically have any ideas going on. Vanity Fair doesn’t either. But [editor in chief Graydon Carter] looks at things like this and he probably found there is a story,” he said. Even Lois is vulnerable to the nostalgia trips. Recently, he thought, “Alright, I’ll read the damn Audrey Hepburn story.”