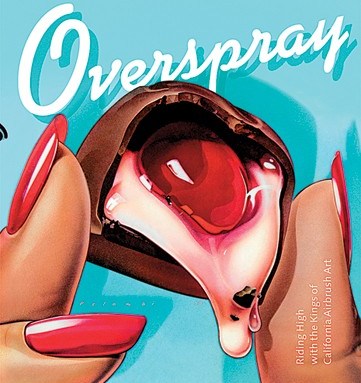 A selection of books from art to intrigue.

A Child’s Christmas in Wales, with woodcuts by Ellen Raskin
Christmas Poems
Two beautifully designed New Directions books that ring with just the right splash of holiday cheer and sentiment. In A Child’s Christmas in Wales, Dylan Thomas captures a child’s-eye view, and an adult’s fond remembrance, of a magical time. First published in the Forties, Christmas Poems is a selection of classic poems stretching from Virgil to Chaucer and Dante, then to Longfellow, Rainer Maria Rilke, William Butler Yeats, e.e. cummings, Kenneth Patchen and Thomas Merton, and to the present day with Lawrence Ferlinghetti and Bernadette Mayer.

Overspray: Riding High With the Kings of California Airbrush Art (PictureBox)
Inspired by surf graphics, psychedelia and the slick shine of Hollywood, a generation of young artists began in the Seventies to make every image glisten and every record cover shine. The four men at the center of Los Angeles’ airbrush art—Charles E. White 3rd, Peter Palombi, Dave Willardson and Peter Lloyd—came to define the look of illustrative graphics for a generation of viewers. Overspray tells the story of these artists via hundreds of images of their work, unseen production roughs, documentary photographs and other ephemera.

Dancehall: The Story of Jamaican Dancehall Culture (Soul Jazz Records Publishing)
The definitive study of the Jamaican dancehall scene features hundreds of exclusive photographs of a globally influential yet rarely documented culture. Born in the Fifties out of the neighborhood jams of Kingston, dancehall grew to its height in the Eighties before a massive influx of drugs and guns made the scene too dangerous for many. In the early Eighties, as Jamaica was in the throes of political and gang violence, Beth Lesser ventured where few others dared, and Dancehall is a record of this exciting, dangerous and vibrant world.

Artists’ Handbook (Ludion)
George Wittenborn (1905-74), legendary émigré bookseller, publisher, dealer and friend to artists ranging from Léger, Ernst, Picasso and Braque to Calder, Warhol, Johns, Ono, Richter, Baldessari and Nauman, kept a guest book over the decades of his connoisseurship. On March 16, 1944, the Mexican painter and writer Miguel Covarrubias drew a hand in Wittenborn’s guest book in lieu of his signature—and with that, a tradition was born. This monumental volume contains renderings of hands by roughly 300 of the 20th century’s most famous artists.

Paola Pivi: It Just Keeps Getting Better (Walther König, Köln)
Paola Pivi, an Alaska-based Milanese artist born in 1971, has won international recognition for her ambitious, daring and thoughtful projects, which are often enormously complex to realize, unusual in size and scope and require specialist technical knowledge to produce. This book was published in conjunction with her recent solo exhibition at Kunsthalle Basel. The artist employs a variety of media, ranging from sculpture and photography to live action involving animals and people. Her large-scale installations dramatize the absurd by creating disorienting situations and contexts: a fighter jet turned on its back, for example, or a huge tractor-trailor turned on its side.

Robert Frank: The Complete Film Works (Steidl)
At the very moment the Zurichborn photographer Robert Frank became an art-world star at the end of the Fifties, he abandoned still photography to become a filmmaker. Though he did return to photography in the Seventies, Frank the filmmaker has remained a well-kept secret for almost four decades. The three boxed sets of Robert Frank: The Complete Film Works contain each of his more than 25 films and videos—many of them classics of Fifties and Sixties New American Cinema.

A Bathing Ape (Rizzoli)
The creation of the young, enigmatic Japanese designer simply known as Nigo, A Bathing Ape has rapidly become one of the most sought-after youth brands worldwide. With a core product line of limited edition hip-hop apparel, the franchise since has expanded to include everything from edgy updates of classic suits to an entire catalogue of patent-leather sneakers, a full line of women’s accessories, collectible vinyl toys, fragrances and its own très cool indie record label. It also has spawned collaborations with Pepsi, Adidas, MAC cosmetics and Sony.

City of Thieves (Plume)
From David Benioff, author of the bestselling novel The 25th Hour, City of Thieves is set during the Nazi siege of Leningrad. The novel tells the tale of two prisoners of war, Lev and Kolya, who are destined for execution until they are given an alternative: to find a dozen eggs, in a city suffering from near famine, for a Soviet colonel. Benioff has lent his prose to cinema, as well, penning the screenplays for The Kite Runner and Wolverine in addition to Spike Lee’s adaptation of his own The 25th Hour.